The ÖVP achieved first place with gains with 18 out of 48 mandates. The SPÖ achieved second place with 12 seats in losses. The Greens, KPÖ and Neos achieved gains, the FPÖ remained in third place with massive losses.

In the state parliament session on August 26, 2019, the Freedom Party submitted a motion for new elections. On September 5, 2019, the Styrian state parliament decided on its premature dissolution with the votes of the ÖVP, FPÖ and the Greens in a special meeting. November 24, 2019 was set as the election day.

The following parties ran for election:

There is no nationwide percentage hurdle in Styria . A basic mandate in one of the four constituencies ( Graz and the surrounding area , West Styria , East Styria , Upper Styria ) is required for entry into the state parliament .

When asked which party the Styrians would vote if the state elections were to take place next Sunday, the respondents answered as follows:

(Note: The statistical range of fluctuation (deviation) is between 3 and 5 percent depending on the party.)

Surveys on the direct election of the governor

The percentages indicate which potential coalition the respondents would prefer most. 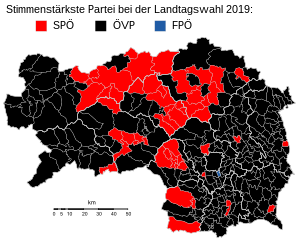 Majorities in the municipalities of Styria

Results in the four regional constituencies 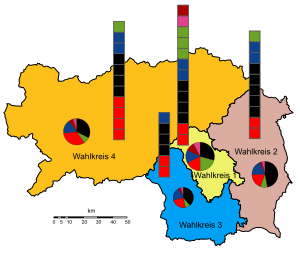 Results in the four regional constituencies. The colors of the circle sectors correspond to the party colors. The area of ​​the circles corresponds to the respective number of voters. Each box corresponds to an elected MP.

The following tables show the results in the four regional constituencies. Constituency 1 includes the city of Graz and the Graz-Umgebung district , constituency 2 the districts Hartberg-Fürstenfeld , Weiz and Southeast Styria , and constituency 3 the districts Deutschlandsberg , Voitsberg and Leibnitz and the constituency 4 districts Bruck-MÃ¼rzzuschlag , Leoben , Murau , Mur and Liezen . In the constituencies, 40 of the 48 MPs were elected by proportional representation. The specified number of seats relates only to these basic mandates. ÖVP and SPÖ each received two, the four other parties each received an additional remaining mandate in the second phase of the investigation. The Greens thus doubled their share of seats compared to 2015 and for the first time also received basic mandates in constituencies 2 and 4. NEOS received the basic mandate necessary for entry into the state parliament in constituency 1 (2780 votes above the hurdle) and with their two Sitting in the state parliament for the first time. The KPÖ missed the third mandate by 301 votes, which narrowly went to the SPÖ.