According to the preliminary election results (without postal votes from outside the constituency), the two previous governing parties, the ÖVP and the Greens, each achieved gains. The SPÖ and NEOS also achieved a slight increase in votes. The biggest loser in the election was the FPÖ , which lost more than nine percentage points when its new top candidate Christof Bitschi ran for the first time and had to give up second place to the Greens. Once again, the People's Party was clearly in first place, which under Governor Markus Wallner was unable to achieve an absolute majority in the mandate, but with slight increases it clearly secured first place with almost 25 percentage points ahead of the second-placed Greens.

In the 2014 state elections , the Vorarlberg People's Party was again the party with the strongest vote by a large margin (41.79%), but for the second time after 1999 it lost not only an absolute majority of votes but also a mandate majority and was thus forced to form a coalition government . After exploratory talks with all parliamentary groups, the ÖVP and the Greens agreed to form the first black-green government coalition in Vorarlberg ( Wallner II regional government ). The governing parties ÖVP and Greens together had 22 of 36 seats in the Landtag in the 30th legislative period (2014–2019) . The Greens (17.14%) were one of the winners in the 2014 election alongside the first-time party NEOS - Das Neue Österreich and Liberales Forum (6.89%), with both parties gaining more than 6 percent of the votes. The SPÖ Vorarlberg was one of the losers in the election at the time and for the first time in its history achieved less than ten percent of the votes with only 8.77% of the vote, but was able to just about hold its third mandate in the state parliament. The FPÖ also recorded slight losses (23.42%), which nevertheless remained clearly the second strongest party in the Vorarlberg state parliament.

Both the Social Democrats and the Freedom Party took over the 30th legislative session two changes to their national party leadership before: In the SPÖ followed, first from September 2016 Gabriele Sprickler-Falschlunger on Michael Ritsch , then took over on Sept. 20, 2018 Martin Staudinger her to chair of the Vorarlberg Social Democrats. In the FPÖ, Reinhard Eugen Bösch, Member of the National Council, took over leadership of the party from Dieter Egger on July 1, 2016 . Bösch was subsequently replaced by Christof Bitschi as FPÖ regional chairman on June 8, 2018 .

After the " Ibiza Affair " became known in May 2019, in which the then FPÖ Vice Chancellor Heinz-Christian Strache was significantly involved, Governor Markus Wallner concluded a coalition with the FPÖ at the state level and questioned the specific election date due to the early National Council election . Although it was initially considered to merge the dates of the early elections at federal level and the state elections, the state government rejected this idea shortly afterwards for reasons of legal certainty. Christof Bitschi , the regional party leader of the FPÖ Vorarlberg, had already excluded a coalition with the "Wallner ÖVP" when he took office in June 2018, but sent more conciliatory signals to the Vorarlberg People's Party before the "Ibiza Affair" became known, according to political observers.

Ballot for the state election in the Dornbirn constituency

Parties not yet represented in the state parliament

Several parties and groups not previously represented in the state parliament announced in the run-up to the state elections that they would run nationwide. In order to run in a Vorarlberg state election, at least 100 declarations of support must be submitted in an electoral district in accordance with Section 27 (5) of the State Election Act. Parties that want to run nationwide must collect 100 declarations of support in each of the four state electoral districts and submit them to the state electoral authority. Any person entitled to vote in the respective constituency can submit such a declaration of support.

At the end of the submission deadline on August 23, it was clear that a total of twelve lists had included nominations for the state election. In addition to the already represented in parliament parties the list ranged home of all cultures (HAK), the men's party , the transformation , the list Xi - Chance future , the list WE - platform for family and child protection , the Christian Party of Austria and the list Every vote APPLY Nominations. The CPÖ only ran for election in the constituencies of Bregenz, Bludenz and Feldkirch, but not in the constituency of Dornbirn. The GILT list only submitted a district election proposal for the Feldkirch constituency. All other parties and lists submitted nominations for all electoral districts, running nationwide. 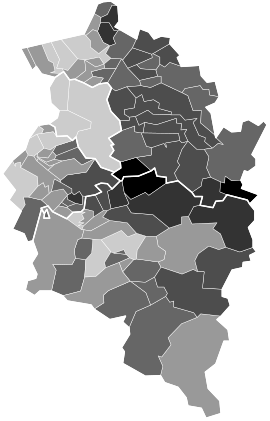 1 Party names as abbreviations according to the official election proposal

The percentages in the “Result” columns in the 3 table sections relate to different aggregates: The number of all eligible voters / the votes cast / the valid votes. The percentages under “Differences”, however, are the arithmetic difference between the two percentages of the results in the same line.

Immediately after the state elections, Governor Markus Wallner, as party chairman of what was once again by far the strongest party, held talks on Tuesday, October 15, 2019 with the party leaders of all other state parliament parties. The next day, however, as indicated several times before the election, the two previous government partners ÖVP and Greens started coalition talks. As early as November 4th, and thus only a little more than two weeks later, the black-green coalition negotiators submitted a renewed coalition agreement to their party committees for voting, which was accepted with a large majority by both the ÖVP state party presidency and the green state assembly. Barbara Schöbi-Fink (ÖVP) became the new state governor in the new black-green coalition government of the Wallner III state government under the leadership of Governor Markus Wallner (ÖVP) , Marco Tittler (ÖVP) succeeded Karlheinz Rüdisser as the new economic councilor and Martina Rüscher (ÖVP) as Christian Bernhard's successor, the new state councilor for health. Christian Gantner from the ÖVP and Johannes Rauch and Katharina Wiesflecker from the Greens remained members of the state government as state councilors.