Oberndorf bei Salzburg is a city in Austria with 5804 inhabitants (as of January 1, 2020). It is located in the north of the federal state of Salzburg on the right bank of the Salzach opposite the Bavarian border town of Laufen . The Christmas carol Silent Night, Holy Night, was performed for the first time in Oberndorf in 1818 .

The city of Oberndorf near Salzburg is located on the right bank of the Salzach about 17 km north of the city of Salzburg in Flachgau on the border with Bavaria . It extends from west to east about 2.2 km and from north to south about 3.3 km; the urban area covers 4.54 km². The community is part of the judicial district of Oberndorf .

The municipality includes the following two localities (population in brackets as of January 1, 2020):

The community consists of the cadastral community Oberndorf.

The border to Nussdorf am Haunsberg is almost entirely formed by the Oichten (also: Oichtenbach) and the border to Laufen is also the state border in the middle of the Salzach.

As a suburb of the city of Laufen on the left bank of the river, Oberndorf originally belonged to the Salzburggau of the Duchy of Baiern. The Salzburg archbishops were able to acquire the area of ​​the later Rupertiwinkel in the 13th century . In 1275, Salzburg's western border with the Chiemgau was confirmed by the Landshut Duke Heinrich . This marked the beginning of the separation of the state of Salzburg from the motherland of Bavaria. In 1328, Salzburg had become a largely independent state through the enactment of its own regional order. With the Treaty of Munich in 1816, Laufen and the Rupertiwinkel were separated from Salzburg and Bavaria was added, Oberndorf became Austrian and thus a border town between the Kingdom of Bavaria and Austria, while Laufen remained in the Salzach district of the Kingdom of Bavaria (dissolved in 1817) .

In the 19th century, due to the construction of the railway, shipping on the Salzach , which had been important for the salt trade, continued to decline. The last salt transport took place in 1871.

Until the end of the 19th century, the place consisted of a few houses at the bend of the Salzach, where the Alte Landstrasse meets the Schöffleutgasse today, as well as a few houses further downstream along today's Uferstrasse. Since at least 1278 there has been a wooden Joch bridge over the Salzach roughly where the Europasteg is today . It connected the city mountain and the lower city gate in Laufen with the foot of the Kalvarienberg in Oberndorf. Over the centuries, Laufen and, above all, the low-lying Oberndorf, repeatedly suffered from floods that damaged or completely destroyed the bridge, for example in the years 1314, 1508, 1567, 1598, 1786 and 1787. In August 1896, an unusually high one cracked Flood back part of the bridge. While the plans for a higher iron arch bridge were still being planned, a flood occurred on July 31 and August 1, 1897, which exceeded the last one by a meter and not only tore away the temporarily repaired wooden bridge, but also the previous plans for the made the new bridge obsolete. It was finally agreed to build an even higher bridge when the floods of September 13th and 14th, 1899 exceeded all previously registered trademarks and also made the last plans for a higher bridge to make waste. This flood exceeded the access roads to the previous bridge by two to three meters and damaged or destroyed almost all buildings in Oberndorf, including the late Baroque St. Nicholas Church.

It was therefore decided to build a bridge at the current location, an idea that had previously failed due to resistance from both communities. The terrain there was high enough so that the access roads could also be constructed without flooding. In the course of the construction of the new bridge, the previous Oberndorf was largely abandoned and demolished and a new location with a new church was built at the new bridge.

In April 2001 the Oberndorf market was raised to the status of a town.

Blazon : In the divided coat of arms , a silver church with unexposed windows and the tower to the right is placed above in black with small sprinkled gold stars on a flat silver mountain of three ; below in the blue and white field, which is divided by a wave cut , a diagonally red and white striped rowboat with a salt load concealed by a tarpaulin and led by five rowers and a helmsman in costume.

Symbolism: The rowing boat represents a salt ship. The five rowers are characterized by their costumes and their high black hats as 'lay judges'. 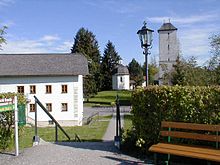 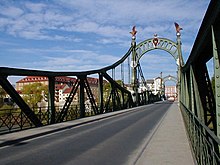 Salzach bridge with a view from Oberndorf to Laufen 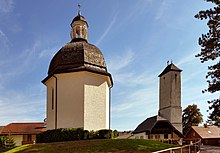 In Oberndorf in 1818 the Christmas carol Silent Night, Holy Night was performed publicly for the first time by the vicar Joseph Mohr (lyrics) and by the teacher Franz Xaver Gruber (melody), who worked in Arnsdorf , in the old parish church of St. Nikolai . The Silent Night Chapel has stood there since 1937 . The Silent Night Museum is in the immediate vicinity. Every year on December 24th there is a Christmas celebration at the chapel.

With the Mohr-Gruber memorial there is a memorial for the creators of the song in front of the current parish church.

The German-Austrian television film Das Ewige Lied (1997) about Pastor Joseph Mohr is set in Oberndorf around 1818.

In 2018 the Christmas carol and its message were the subject of a state exhibition at which Oberndorf was one of several exhibition locations.

The Liedertafel Oberndorf was founded in 1878 as a male choir and continued as a mixed choir after the first year. In 1951, the members launched the memorial service at the Silent Night Chapel in honor of the creators of the Christmas carol, which still exists today. In 2018 the Liedertafel celebrated its 140th anniversary. The repertoire of the 43-member choir includes folk songs , musicals , hits , gospel and sacred hymns as well as classical songs . As regular performances there is an annual summer concert, an Advent concert in the pilgrimage church Maria Bühel, performances at the Christmas market and at Christmas at the memorial service on December 24th at the Silent Night Chapel (with a performance of the original version of Silent Night, Holy Night ) and at the Stefani mass on December 26th in the parish church.

There are club sports in Oberndorf 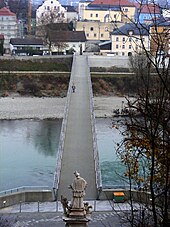 By public transport, Oberndorf can be reached from Salzburg with line 1 of the Salzburg S-Bahn every half hour, sometimes every quarter of an hour in around 25 minutes. Oberndorf can also be reached by post buses .

Oberndorf is located on Lamprechtshausener Straße (B 156), which today, as a bypass road, only passes the city on the edge. The feeder road from this is the only 2.2 km long B 156a, which crosses the south of the city as Salzburger Straße and ends at the Salzach Bridge to Laufen.

It is also possible to cover the entire route from Salzburg to Oberndorf (and far beyond) by bike or on foot along a stairway along the Salzach. The path is part of the Tauern Cycle Path .

In 2007 a new crossing of the river for pedestrians and cyclists was opened with the Europasteg , which connects Oberndorf and Laufen at the site of an earlier bridge. The pilots of this are still standing today .

The new building of the BORG Oberndorf, completed in 2018