The Salzburg-Umgebung district is a political district in the Austrian state of Salzburg .

With 1,004.79 km² it occupies the main part of the Flachgau , the northernmost of the five districts of Salzburg, but without the provincial capital Salzburg , which has its own statute .

The license plate assigned to the district is SL and stands for Salzburg-Land . It describes the area around the city of Salzburg and is not to be confused with the state of Salzburg , which means the historical and state of Salzburg itself or the state government of the state. The Salzburg-Umgebung district is also not to be equated with Salzburg and its surroundings ; because the latter is ambiguous and includes the city and the rural district or means the city with the more direct or further surrounding area.

The Flachgau includes the Salzburg Basin - the area in which the Salzach leaves the Alps and flows into the Alpine foothills - from the height of the confluence of the Königseeache , further the lower reaches of the Salzach to St. Georgen bei Salzburg and the area east of it, the Salzburg Lake District as well the the Salzkammergut belonging Fuschlsee with the region Gaissau-Hintersee .

The landscape of the Flachgau is dominated by the Untersberg - one of its main summits, the Salzburger Hochthron , which forms the Austrian-German border - with the Watzmann , Göll , Hagen and Tennen Mountains in the background. The eastern, hilly and wooded mountain regions of the Flachgau, that is the eastern foothills of the Salzkammergut mountains , stretch from the Gaisberg to the Zwölferhorn . The ridge of the Haunsberg and the Kolomansberg belong to the flysch zone to the north of it , while the northernmost areas of the Flachgau have the typically undulating, strongly agricultural alpine foreland character. Riparian forest areas can be found along the Salzach .

The district surrounds the state capital almost completely bordered to the north by the district Braunau am Inn , east to the District Vöcklabruck and the district of Gmunden (all three Upper Austria ), on the south by the Salzburg District Hallein , on the west by the Bavarian district of Berchtesgaden and in the northwest to the Traunstein district .

Since the 6th century the area of ​​today's Flachgau belonged to the Salzburggau of the tribal duchy of Bavaria . With the recognition of Salzburg's western border by the Bavarian Duke in 1275, the separation of Salzburg from Bavaria entered its final phase. When Archbishop Friedrich III. von Leibnitz had issued its own regional order in 1328, the Archdiocese of Salzburg had become a largely independent state within the Holy Roman Empire .

The rule of the Salzburg prince archbishops lasted until 1803 in the flat land , which was also known as the land in front of the mountains or the outer mountains , the latter in contrast to the Inner Mountains (Gebirgsgaue Pongau , Pinzgau and Lungau ). In 1803 the archbishopric was secularized and an electoral principality of Salzburg was created under Habsburg rule, with which the Flachgau became worldly property after a millennium. As early as 1805 it came to the Austrian Empire , albeit initially under French occupation, and in 1806, with the dissolution of the Holy Roman Empire , the electoral office became obsolete and the country was converted into a duchy. After the area was again under French / Bavarian administration for a short time in the course of the Napoleonic Wars , the city of Salzburg became part of Austria in 1816; the areas west of the Salzach remained as Rupertiwinkel near Bavaria. Salzburg had lost its independence and was quickly attached to the Crown Land of Austria above the Enns as the Salzburg District. When it was upgraded to its own crown land , a state constitution was issued in 1850 , which also brought about new regulations for the state administration and the introduction of municipal regulations.

Until the late 19th century, the area of ​​the later Flachgau formed a unit with today's Tennengau and the Lammertal, which was acquired by the Pongau after 1805 . With the establishment of the Hallein District Commission in 1896 (resolution: 1895), these areas became part of today's Tennengau. At the same time, the name "Flachgau" began to establish itself for the remaining area of ​​the former Salzburggau - based on the names "Pongau", "Pinzgau", "Lungau" and the new "Tennengau" which had existed at least since the Middle Ages.

At least since 2014 there have been plans to relocate the district administration to Flachgau, with the town of Seekirchen am Wallersee having the best chance. Since the merger of the three Flachgau district courts to the new Seekirchen location became known, the plans for a joint location in Seekirchen have become more specific, with construction to start on both buildings at the end of 2020.

The previous district court districts of Neumarkt, Oberndorf and Thalgau are expected to be dissolved on July 1, 2022 and combined in a central district court at the new Seekirchen am Wallersee location and the district administration to be relocated to a new building nearby.

The Salzburg-Umgebung district is now divided into 37  municipalities , including three cities and six market municipalities (the population figures from January 1, 2020 in brackets). The administrative seat of the district is located in the provincial capital Salzburg, which itself does not belong to the district. 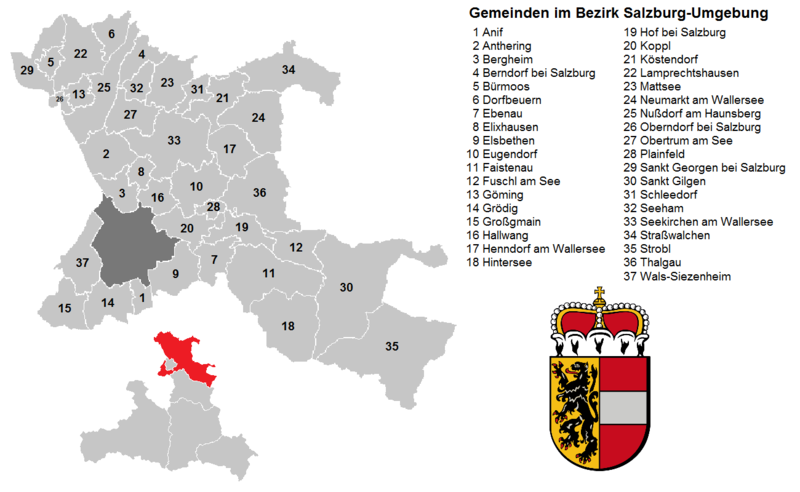 The following were born in Flachgau:

In Flachgau lived and live among others:

Districts (Gaue) and statutory cities in the State of Salzburg