The title of this article is ambiguous. Further meanings are listed under Sankt Gilgen (disambiguation) .

Sankt Gilgen is a municipality in the district of Salzburg-Umgebung (Flachgau), in the Salzburger Salzkammergut in Austria . The community is located in the judicial district of Thalgau , has 3960 inhabitants (as of January 1, 2020) and has become known as a summer resort .

Sankt Gilgen is one of the three surrounding communities of the Wolfgangsee, next to Strobl and St. Wolfgang in the Salzkammergut , and the most easterly of the communities in the Wolfgang- / Ischltal . A good half of the lake belongs to Sankt Gilgen, the eastern border is at the narrow point of the lake at the Zinkenbach peninsula , with the Zinkenbach - Königsbach as the border. The municipality also includes the north side of the Osterhorn group south of the lake, the southern tip of the municipality is the Holzeck behind the Königsberger Horn . On the north bank, the Ried am Schafbergfuß also belongs to Sankt Gilgen. At the western end of the lake lies the widening of the village of Sankt Gilgen with the Sankt Gilgener Berg and the Winkl - Zeppezau basin . Here also the southern parts of the Höllkargruppe (Schobergruppe) belong to the municipality, up to the Eibenssee and the Drachenwand .

Sankt Gilgen also includes the areas called Burgau northeast behind the Scharflinger Höhe and the Schafberg, these are the Oberburgau am Mondsee and the Unterburgau am Attersee . This makes Sankt Gilgen one of the Mondsee communities alongside Mondsee , Tiefgraben , St. Lorenz , Innerschwand and Unterach , and one of the Attersee communities alongside Unterach, Steinbach , Nussdorf , Weyregg , Attersee , Schörfling and Seewalchen . The Schafberg also largely belongs to Sankt Gilgen, especially the entire summit, to St. Wolfgang only the southwest flank belongs. The border is in the gap between Spinnerin and Törlspitz . The north-western boundary of the municipality is Breitenberg and Sechserkogel at the foot of the Leonsberg (Zimnitz) and above the Weißenbachtal .

The community comprises six cadastral communities (area as of December 31, 2019):

The municipality is divided into eight localities (number of inhabitants in brackets as of January 1, 2020):

The community is surrounded by ten neighboring communities, including:

Capital of the municipality

The site covers about 1½ kilometers along the Mondseestraße B B154 and Wolfgang road B 158. The old center is characterized in particular by Mozart Square and Church Square by an ensemble of houses of the Baroque in Inn-Salzach style and surrounding the Sommerfrische- home style of the period out. The lake promenade stretches along Mondseestrasse , the old B 154. Above Wolfgangsee Strasse B 158, here called Hochreithstrasse , is the Hochreith location . The north-western locations on the new B 154 are called Billroth , after the property built there by the doctor Theodor Billroth ( Villa Billroth , today a seminar hotel).

The hamlet of Brunnwinkl to the east of the lake and the houses of Lueg to the south also belong to the village of Sankt Gilgen . The locality comprises around 450 addresses with a good 1000 inhabitants, both of the associated locations have only a few houses.

The municipalities of Laim (with Irlreit ) and Pöllach (with the equestrian settlement ) above Sankt Gilgen also belong to the cadastral community of St. Gilgen with 1,609.91 hectares . This area extends from the Eibensee in the north to the Pillsteinhöhe above the Stubneralm on the Zwölferhorn in the south. The cadastral municipality corresponds to the St. Gilgen-Zentrum counting district . This includes around 800 addresses with around 2100 inhabitants.

∗KG Winkl borders from north to south-east. At one point near Lueg, KG Ried also borders.

Sankt Gilgen was named after St. Aegidius , who is also called Gilg or Gilgian in German-speaking countries . Originally the place was called Oberdrum . This name was an indication of the geographical location, namely on the upper part (Drum, Trum) of the lake, until the 19th century, Sankt Aegidi was also said to the place.

The room was already inhabited prehistorically. The pile dwellings in Scharfling are found to date back to the 5th millennium BC, the pile dwellings in See am Mondsee , namesake of the Mondsee culture , are among the most important settlements in the Alpine region in the later Neolithic period (3800-3300 BC). Bronze Age is proven in the Oberburgau . In the Iron Age Celtic period, nearby Hallstatt was the main town of Hallstatt culture (800–450 BC). At the Kaiserbrunnen on the Attersee there are finds from the 1st century BC. Been made. The old road from the Ischltal to the east was also important as a Roman road (Roman times in Austria 15–487 AD), it ran from Iuvavum (Salzburg) to the Statio Escensis (Ischl). Its course along the Wolfgangsee is unclear. All of these influences suggest that there will be at least isolated settlements on the lakeshore and mountain areas in the municipality, but settlement continuity is uncertain.

Around 750 AD, Duke Odilo (Bavaria) donated the Abersee (Aberseeland) area to the Salzburg Church so that monks could develop it. By and large , the area of ​​the Wolfgang Valley was completely cultivated by the 13th century . At that time there were about ten houses. The first church was also built during this period. The pilgrimage to St. Wolfgang was one of the most important in Europe in the Middle Ages, so that the area between the diocese of Salzburg and the Mondsee monastery (Thalgau), and later Habsburg Austria (Wolfgangland), was disputed. The proximity to the Ischl salt mountain also had a political impact. From this time on, Sankt Gilgen, together with Strobl and Fuschl, formed the rule of Hüttenstein , originally located at the castle on the Scharflinger Höhe, and from the middle of the 16th century on the new castle on the Krotensee.

As early as 1380 the Attergau came to Habsburg Austria , in 1506 also Wildeneck (including the secular jurisdiction over Mondseeland), but pledged it to Salzburg until 1664. When it was returned, the Salzburg archbishops postulated their sovereignty over Burgau, where they had held fishing rights from the High Middle Ages (fish master in Unterach am Attersee ). Only with a state treaty of May 26, 1689 between Emperor Leopold I and Prince Archbishop Thun were the national borders finally regulated.

The place Sankt Gilgen has always been important for the Wolfgang pilgrimage, you cross over by boat or choose the land route over the Falkenstein. Due to the increasing population, the church had to be rebuilt twice, once in 1425 and a second time in 1769. It was not until the 19th century that the various roads on the three lakes, blocked by steep walls, were set up as real roads. After the start of shipping on the Wolfgangsee (1873) and especially after the establishment of the Salzkammergut local railway (1893), the previously insignificant village and the other favorable locations on the lakes experienced a strong tourist boom as summer resorts. Celebrities like the doctor Theodor Billroth built summer villas here. In the inter-war period, an artists 'colony, the Zinkenbach painters' colony, also developed . The development as a tourist region also continued in the post-war period.

Sankt Gilgen is a tourist municipality, with a focus on recreational and family tourism, and with many holiday homes ( summer vacation ) and as a local recreation area also the city of Salzburg. The place itself was built with numerous large apartment houses from the 1970s , today the cold bed phenomenon is a problem, the community has around 3,000
guest beds , the number of overnight stays was 300,000, with an occupancy of the second homes for four weeks (30 days, around 40,000 overnight stays), one eighth of all overnight stays would not generate any added value with very high apartment prices. The main season is summer bathing tourism . Otherwise the area is suitable for easy hiking . The two local mountains of the community are accessible by mountain railways. The Zwölferhorn is a scenic and ski mountain, but the latter only plays a local role as an insider tip for family skiing as well as steep Muggle slopes and unprepared skiing.

The Zwölferhornbahn with the old 1960s gondolas (valley station, 2014) 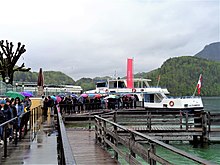 The two main traffic axes of the community are on the one hand Wolfgangsee Straße B 158 Salzburg – Bad Ischl. It comes from Hof bei Salzburg , where the West Autobahn  A 1 is connected to Thalgau , and Fuschl am See over the Sankt Gilgener Berg (approx.  760  m above sea level ), and runs southeast on the south-west bank of the lake over the Zinkenbach peninsula Direction Strobl and Bad Ischl .

The other route is the Mondseestrasse (B154) Straßwalchen – Sankt Gilgen, that of Mondsee , also with an A1 junction, and the Mondsee south-west bank coming over the Scharflinger Höhe  ( 604  m above sea level ) and the Winkl and then on The north shore of the lake runs and joins the B 158 in Sankt Gilgen . At Scharfling / Kienberg am Mondsee, the Kienbergwandstraße (L 217 / L 543) branches off to the east, which connects Oberburgau after the Kienbergwand tunnel . At See am Mondsee / Au it flows into Atterseestrasse B B151 Mondsee – Timelkam, which is located completely outside St. Gilgen and which continues on the Mondsee north-east bank to Unterach am Attersee . There, the Seeleitenstrasse B 152 Unterach – Seewalchen branches off, which runs through the Unterburgau on the southern bank of the Attersee . At Weißenbach am Attersee the Weißenbacher Straße B 153 branches off to Bad Ischl.

The small towns in the municipality are mostly located directly on these roads or are connected by short municipal roads. Only Ried can only be reached via the detour of St. Wolfganger Straße (L 116 / L 546) near Strobl and the town of Sankt Wolfgang .

The Wolfgangsee-Schiffahrt , which has existed as such since 1873 and is operated today by Salzburg AG , operates on a seasonal liner service . The landing stages are Sankt Gilgen-Seepromenade , Fürberg and Ried-Falkenstein .

The Schafberg cog railway (SBB), which opened in 1892 and starts in St. Wolfgang / Ried and runs to the Schafberg summit, only runs in the summer months. The Ischlerbahn (Salzkammergut-Lokalbahn, SLKB) used to run through the community, from Scharflingberg through Sankt Gilgen to Reith / Forsthub. This line, built here in 1893, was discontinued and dismantled in 1957. In the area of ​​the municipality, the route has largely been completely incorporated into the road construction; there is still an inaccessible tunnel at Scharflinger Höhe .

The Zwölferhorn cable car was built in 1957. It has its valley station right in the village of Sankt Gilgen and operates in the summer and winter seasons.

The municipal coat of arms is as follows described :

"In the blue field above a slightly moved lake level, a twelve-rayed golden sun ."

Relation to the community

Communities in the Wolfgangsee holiday region

Municipalities in the Inner Salzkammergut