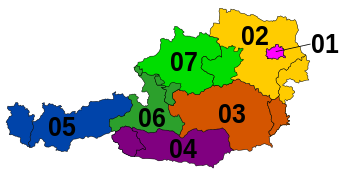 Area codes in Austria: The scheme largely, but not exactly, corresponds to the borders of the federal states - Burgenland, Vorarlberg, East Tyrol, parts of Upper Austria and western Lower Austria are assigned to other areas

The telephone prefix codes in Austria are organized and assigned by Rundfunk und Telekom Regulierungs-GmbH (RTR). There are regulations and guidelines for assigning number ranges. Responsibility for the allocation and use of numbers within the area code is then the responsibility of the relevant network operator (for regional codes, this is usually A1 Telekom Austria , for mobile phone codes, the relevant network operator, etc.).

Structure of the code

There are no legal regulations in Austria for the spelling of telephone numbers , but the RTR recommends using DIN 5008 . More on this under phone number / spellings .

Dialing an Austrian number from abroad is done as follows:

Dialing within the country can usually be done as follows:

In the landline network , a number in the same area code can be dialed without the area code. This only works to a limited extent in cellular networks.

The area code is the area code of a location, cellular network or other type of network. Since the introduction of number portability in mobile communications, the selected network can no longer be determined with certainty using the area code. If a dialed number is actually in a different cellular network than the one expected from the area code, an automatic brief notification (announcement) is usually given when the connection is established.

In Austria, the area codes of all mobile networks start with the sequence 06, followed by two more digits (06xx). The historical background is that the first Mobile Switching Center for the C-Netz (0663) started in 1984 was in Salzburg. Since many area codes in and around the federal state of Salzburg also begin with 06, it is not easy to tell from the 06xx area code whether it is a mobile or landline number. For example, Salzburg (city) has the area code 0662. As of March 30, 2011, RTR has specified the following number ranges for subscriber numbers in mobile communications:

As of June 1, 2016, the following number ranges and blocks have been allocated for mobile network operators from the above pool:

The complete list of "area codes" contains all the places in which the (main) telephone exchange for the area code in question is located (in the notation of the list of "Rundfunk und Telekom Regulierungs-GmbH" (RTR-GmbH)).

Since an area code can encompass several municipalities or parts thereof, the assignment is only partially correct. This list is initially sorted like the RTR list. All area codes are given without a leading zero. Additionally specified municipalities (without a telephone exchange) are marked with an asterix (*) after the area code, the location of the telephone exchange can be found by sorting by area code!

In addition, parts of the area code 0677 and 0678 T-Mobile and NETCO 3G GmbH (a subsidiary of Hutchison 3G Austria) are allocated, but have not yet been used.

Since Orange was taken over by Drei, the former Orange area code 0699 has also been assigned to it.

The number porting means that the operator can no longer be inferred with certainty from the area code. The operators continue to have administrative sovereignty over their area codes.

In ascending order of numbers ("x" stands for any single digit from 0–9).

a: Number ranges that are not (any longer) provided for in the KEM-V
b: Telephone health
advice c: Test operation since December 9, 1981, nationwide from 1982