View of Sankt Paul from the Rabenstein castle ruins 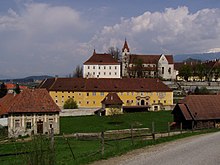 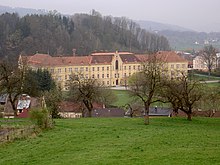 St. Paul and its surroundings around 1878 (recording sheet of the state survey )

The community is divided into the eight cadastral communities Granitztal-St. Paul, Granitztal-Weissenegg, Johannesberg, Legerbuch, Kollnitz, Sankt Paul, Loschental and Weinberg. The municipality includes the following 21 localities (population in brackets as of January 1, 2020):

Two dedicatory inscriptions for the Celtic god Latobius were found from the Roman period (province of Noricum ) . The first written mention of the place as villula Brugga comes from a document from 1091: Count Engelbert von Spanheim donated a Benedictine monastery at an already existing Paulskirche instead of a Lavant castle . This village of Brugga on a bridge over the Granitzbach was a commercial and merchant settlement, which in 1184 in a document Pope Lucius III. was first referred to as market ( villam, quod forum dicitur ). In 1289 the place in the Klosterurbar was first expressly referred to as the St. Paul Market ( in foro sancti Pauli ); before (1255) Bernhard von Spanheim had granted the residents the corresponding rights. The market was always under the influence of the monastery, which is still an important economic factor today.

In 1874 the telegraph came to Sankt Paul. The opening of an imperial and royal state telegraph station with "limited daily services" took place at the same time as in other smaller places in the monarchy.

The market town, newly constituted in 1850, was renamed Spanheim in 1941, which was reversed in 1946. In 1957, the area around the so-called "Devil's Island" in the east and part of the dissolved local community of Legerbuch was enlarged. Further increases in the area followed through incorporations on the occasion of the municipal structural reform in 1973, which were partially reversed when St. Georgen became independent again in 1991.

Today's coat of arms goes back to a market seal that was handed down for October 1, 1665 and was probably awarded under Abbot Philipp Rottenhäuser (ruled 1661–1677). It is composed of pieces of herald , which is rather untypical for this time.

The official blazon of the coat of arms reads: “Divided shield; in front three rows of silver wedges in black, behind in red three silver bars. ” This description of the coat of arms is heraldically incorrect in parts , in particular it is a split, not divided coat of arms . In 2006 the following proposal was therefore submitted: “Split shield; in front in black three rows of silver overturned gores under a reduced shield head, in the back divided six times by red and silver. "

The municipality was certified to be in charge of the coat of arms on October 22, 1973, and at the same time it was awarded a flag in red-white-black with an incorporated coat of arms.

Ring bearer of the municipality

Cities and communities in the Wolfsberg district