Hugo Wolf, after a photograph etched by Ferdinand Schmutzer (1921)

Birthplace with a memorial plaque in Slovenj Gradec (Windischgrätz)

Hugo Wolf was the fourth of eight children of the leather merchant Philipp Wolf (1828–1887) and his wife Katharina, née Nussbaumer, who came from Malborgeth and had Slovenian roots on her mother's side.

Wolf learned to play the piano and violin from his father, who was also a passionate musician . His school days in Graz and at the Stiftsgymnasium St. Paul im Lavanttal were not very happy. His skills were only shown in music.

From 1875 he was a student of Robert Fuchs at the Conservatory in Vienna , where Gustav Mahler was his classmate. Apparently he learned very little there, and in 1877 he was dismissed for a joke in the form of a threatening letter to the rector with which he might not have had anything to do with. From the age of seventeen he was dependent on himself for his musical education. After taking piano lessons and thanks to irregular financial support from his father, he was able to live in Vienna for a few years.

In 1881 he accepted a position as assistant conductor at the Salzburg City Theater, but was dismissed after three months and at least never again employed as a musician.

Activity as a music critic

In 1884 Wolf became a music critic of the tabloid Wiener Salonblatt, founded in 1869/70, "which accommodates the needs of the Austrian nobility" - an international social review and gained some notoriety due to his uncompromisingly biting and sarcastic style, which, however, should hinder his later success. His ardent admiration for Richard Wagner was connected with a harsh rejection of Johannes Brahms , whose work he despised all his life. Brahms, however, read Wolf's attacks in the Salonblatt with relish among friends. Wolf was not employed by this newspaper because of his passionate reviews, but because one of his patrons returned his fee to the paper in the form of advertising orders.

Life as a composer

In 1887 Wolf published twelve of his songs , quit his position at the Salonblatt and began to devote himself only to composition. The following nine years would establish his fame as a composer. They were characterized by periods of intense creativity alternating with periods of mental and physical exhaustion, in which he sometimes found it unbearable to even listen to any music.

Wolf suffered from extreme poverty all his life , which was difficult to bear due to his poor health and his proud, sensitive and nervous character. His sensitive and difficult temperament stood in the way of his professional success. He owed his income almost exclusively to the persistent efforts of a small group of friends, music critics and singers (including Ferdinand Jäger ) to make his songs known, the support of the Vienna Academic Wagner Society and the founding of Hugo Wolf societies, e.g. . B. 1897 by Michael Haberlandt in Vienna . He was also sponsored by Heinrich and Marie Werner in Perchtoldsdorf , who let him have their house in the cold season when it was not inhabited by them themselves. The publication of his songs by the music publisher Schott in 1891 brought him reputation, but after five years only 85 marks and 35 pfennigs. Accordingly, Wolf lived mostly in simple accommodations until the generosity of his friends gave him his own place in 1896, in which he could live for a year.

In September 1897, the effects of syphilis , which he contracted at the age of eighteen, necessitated admission to a mental institution. Among other things, Wolf had started to speak of himself as the appointed director of the Vienna Court Opera , and in this function he planned to pay his respects to the director of the court theater. The appointed for this visit car took Wolf directly to the clinic of the Vienna neurologist Wilhelm Svetlin (1849-1914), the private hospital for Gemüthskranke on the Erdberge to Vienna III. , Leonhardgasse 3 and 5. Although Svetlin had recognized the artist's incurable illness, he released him on January 24, 1898 as cured. Wolf stayed on the Adriatic until the summer of that year , then in Traunkirchen , Upper Austria .

After an (aborted) suicide attempt in the Traunsee , he was not sent to Klinik Dr. Svetlin, but handed over to the Lower Austrian state insane asylum in Vienna-Alsergrund . After four painful years, he died there on February 22nd, 1903. Franz Seifert removed his death mask.

His honorary grave with a tomb designed by Edmund von Hellmer is located in the Vienna Central Cemetery (group 32 A, number 10). In 1903, the year of his death, Hugo-Wolf-Gasse in Vienna- Mariahilf (6th district) was named after him.

Among those composers of late Romanticism who took the position that the traditional rules of beauty and form must be abandoned if they stand in the way of a more precise or lively realization of a dramatic or emotional expression, Wolf does not take a special place because of the particularly daring originality of his methods and the remarkable peculiarities of his personal style, but because these are the direct consequence of an extremely profound poetic insight and imagination.

The frequency of songs built from a single musical phrase - a kind of leitmotif - in the accompaniment has led to the misleading claim that his work is nothing more than the transfer of Wagnerian principles to the art song . In reality, the shape of his songs varies as much as the shape of the poems he set to music. Equally remarkable is the wide range of musical styles that Wolf mastered. At Wolf, however, form and style are so closely linked to the poetic ideas they embody that they can hardly be analyzed independently of the text. 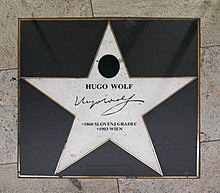 Stern on the Vienna Music Mile

Wolf owes his place among the greatest song composers to the truthfulness and originality of his works and the lively expressiveness with which he presents them. These results are not only the fruit of his extraordinary musical talent, but also of an extraordinary critical understanding of poetry . No other composer had such a scrupulous reverence for the poems he set to music. To put a single accent wrongly was just as abominable sacrilege as misinterpreting an idea or ignoring an essential hint in the text.

Nowhere has the subtlety in the declamation reached a higher degree than in Wolf's songs. The objective and dramatic attitude of his mind should also be emphasized. He preferred to make himself the mouthpiece of poetry instead of using his art to express his own personality, which is why he did not set texts to music by authors whom he contemptuously called "I poets". That is why the men and women who are characterized in his songs stand as if alive in front of the listener and form a kind of gallery of portraits that are clearly the work of his hand, but all of which retain their own identity. These claims can be verified both in terms of the simpler and more melodic of his songs, and in terms of those of extreme complexity and difficulty. Among the first one could be The Abandoned Maiden and The Gardener (Mörike), Secret Love and The Musician (Eichendorff), Anakreon's Grave (Goethe), All went, Herz, zur Ruh ( Spanish songbook ) and numbers 1 and 4 of the Italian songbook mention. Among the latter are An aeolian harp and Der Feuerreiter (Mörike) as well as Ganymed , Mignon and Prometheus (Goethe).

The composer Joseph Marx from Graz , who became famous for his songs written shortly after Hugo Wolf's death, is generally regarded as the musical heir to Wolf's song tradition. With a late romanticism characterized by impressionistic sound painting, Marx tied directly to Wolf's melodious style and thus added another sonorous facet to the Austrian song.

Hugo Wolf's letters to Emil Kauffmann, on behalf of the Hugo Wolf Association in Vienna

Wolf had a close friendship with the university music director in Tübingen and composer Emil Kauffmann , and they exchanged intense letters about their compositions for Mörike poems.

Title page of the 53 Mörike songs , original edition from the Fritz Kauffmann collection

The history of the International Hugo Wolf Academy for Song, Poetry and Lied Art dates back to Wolf's lifetime . It began as an initiative of a Wolf Circle of Friends and now organizes the Stuttgart International Competition for Lied Art every two years . The International Hugo Wolf Society Vienna is editorially involved in Wolf's work . In the 19th district of Döbling , south of Krottenbachstrasse , is the Hugo Wolf Park, which was laid out in 1925 and has been named after the composer since 1953. On July 14, 1992 the asteroid (5177) Hugowolf was named after the composer. The following year, the Hugo Wolf Quartet chose the composer as their namesake.

Otto Werner, the childless grandson of Heinrich and Marie Werner, bequeathed parts of the collection and the Werner House , which came from the time after the Second Turkish Siege, to the community of Perchtoldsdorf , with the condition that a Wolf Museum be set up. This was opened in 1973 with the original facility.