Schott Music GmbH & Co. KG is a large music and music book publisher and one of the oldest music publishers still in existence . The founder was Bernhard Schott in 1770 . At Schott, among other things, the entire compositional work of Richard Wagner was edited, which ultimately made the publisher world famous; also z. B. Beethoven's 9th Symphony and works by Wolfgang Amadeus Mozart . The company headquarters has been in Mainz on the Rhine since it was founded . In the recent history of the company, Schott Music has had the characteristics of a multi-media international conglomerate in the music industry. 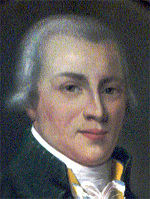 The Schott Music publishing house was founded in Mainz in 1770 by Bernhard Schott (1748–1809) under the name B. Schott's Sons and is still based in a patrician house built in 1792 in the Weihergarten, which is now a listed building. The musician and copper engraver Bernhard Schott received the privilegium exclusivum and the title court music engraver in 1780 . This meant that the works produced by him could not be re-engraved or sold within the electorate. The publishing house benefited from the flourishing cultural life in Mainz and quickly grew to become an important player in the music business. Among other things, Schott provided the busy electoral court orchestra and the orchestra of the young theater with sheet music.

Unlike other print shops in the media city of Mainz, Schott was hardly affected by the Mainz republic and the years of the Cisrhenan republic and the associated separation from the original electoral area , as music notes were less language- bound .

Bernhard Schott also demonstrated a spirit of innovation on a technical level and was one of the first to use the reproduction process of lithography . This enabled a consistently high circulation and soon led to the widespread use of high-quality sheet music. The publishing house quickly established itself beyond the borders of Germany and the first branches were founded: in Antwerp in 1823 , in Brussels in 1830 , and soon afterwards others in London , Vienna , Paris and Leipzig .

In addition to the high quality of the sheet music and the good availability in many European countries, it was above all the commitment to contemporary music that made the publisher internationally known. In addition to works by composers from the Mannheim School ( Carl Stamitz , Georg Joseph Vogler ) and virtuoso social music, game operas were also part of the repertoire. The publication of the piano reductions and first editions of the Mozart operas Don Giovanni and The Abduction from the Seraglio are among the first highlights. Important late works by Ludwig van Beethoven , including the famous 9th Symphony , the Missa solemnis and two of the last string quartets led the publisher into a secure future. 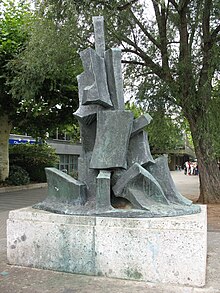 To the genius Richard Wagner , donated by Schott Verlag in 1970

At the beginning of the publishing history, the then modern French taste was decisive for the publishing program. Above all, composers such as Adolphe Adam , Daniel Auber , Gaetano Donizetti , Ignaz Pleyel and Gioachino Rossini were published. Interest in local composers grew only slowly. With Franz Liszt and Peter Cornelius a change of repertoire finally appears. But only in 1859 continued Franz Schott (1811-1874), grandson of the publishing founder Bernhard Schott, a new focus on German composers: Cooperation with Richard Wagner and the publication of its large stage works Die Meistersinger von Nürnberg , Der Ring des Nibelungen and Parsifal form still an important foundation for the publishing house and the current stage repertoire in Germany. The collaboration finally ended due to Wagner's unattainable financial demands: "In general, a music publisher cannot meet your needs, only an enormously wealthy banker or prince with millions to dispose of ..." (Franz Schott on October 21, 1862 at Wagner). Wagner then looked for financial support elsewhere, which was ultimately only granted to him by Johann Weißheimer II , the wealthy father of his friend Wendelin Weißheimer . Only after the change of the Bavarian throne did Wagner find an extremely generous patron in Ludwig II , who relieved Wagner of his financial hardships forever. In 1970 the publishing house was B. Schott's Sons, a large bronze sculpture with the inscription "dedicated to the genius of Richard Wagner" in front of the bank of the Rhine input for Mainz Rheingoldhalle up. 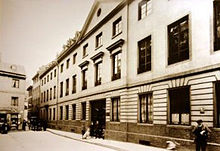 The Modern was reflected first in the Inverlagnahme of works by Igor Stravinsky down, who was a longtime friend of Willi and Ludwig Strecker. The publisher has published, among others, Feu d'artifice , Scherzo fantastique , the ballet L'oiseau de feu (The Firebird) , the Violin Concerto, the Symphony in C major and the Symphony in three movements.

The connection with Paul Hindemith that soon followed opened a new era in publishing politics, because for the first time the publishing house had a “house composer”, whose entire work was published by Schott. Even Carl Orff , the creator of the world success Carmina Burana , is represented with his complete works in Scotland. From then on, many other artists exclusively entrusted their works to the publisher, including Wolfgang Fortner , Jean Françaix , Percy Grainger , Erich Wolfgang Korngold , Hermann Reutter and Michael Tippett .

Many long-term exclusive partners can be found among the composers. Hans Werner Henze was accepted into the publishing repertoire as a composer in 1946 at the age of twenty. Krzysztof Penderecki , Aribert Reimann , Volker David Kirchner and György Ligeti have been publishing their compositions at Schott since the 1970s . Furthermore, international composers such as Toru Takemitsu , Rodion Shchedrin , Peteris Vasks , Henri Dutilleux , Toshio Hosokawa , Ye Xiaogang , Nicholas Lens , Péter Eötvös , Olli Mustonen and Joaquín Rodrigo can be found in the publishing program .

In 2001 Schott started a campaign with which a number of young composers were accepted into the publishing house. Then began working with Joe Duddell , Kenneth Hesketh , Tatjana Komarova , Benjamin Schweitzer , Jörg Widmann , Moritz Eggert and Chaya Czernowin . Christian Jost followed in 2003, Thomas Larcher , Elisabeth Naske , Richard Ayres and Huw Watkins in 2005 and Fazıl Say in 2006 . In the USA , Schott Music Corp. new contracts signed with composers like Tobias Picker and Joseph Schwantner . Since October 1998 the publications of the Paul Sacher Foundation have been looked after by the Schott publishing house.

Publishing house in the Mainz Weihergarten

The publishing house, which is still run as a family business , has an international focus and, in addition to the headquarters in “Weihergarten” in the founding city of Mainz, has another German headquarters in Mainz-Hechtsheim . The subsidiaries located in the Weihergarten include the publishers Astoria Verlag, Atlantis Musikbuch, Ars-Viva, Bund-Verlag, Cranz, Ernst Eulenburg , Fürstner, Hohner-Verlag, Panton and Schott Music Enterprise. In addition, the company Schott Music & Media (sound carriers), Schott Liegenschaftsverwaltung (real estate) and various foundations and associations assigned to the company are located here. The publisher's own production archive with around 50,000 historical titles was located here until it was sold in 2014 .

In New York , Schott operates European American Music Distributors LLC , which takes on the distribution of performance material for numerous major European publishers in the USA , Canada and Mexico .

Its own distribution and logistics center, music distribution services GmbH (mds), in Mainz-Hechtsheim, supplies the entire Schott range as well as the publications of over 120 other publishers. Around 130,000 titles in sheet music, books, audio and electronic data carriers are sent from Mainz around the globe. The modern high-bay warehouse currently houses over 12 million copies.

With the WEGA Verlag Mainz, Schott operates a printing and manufacturing company that accepts orders from various publishers around the world.

There are in some cases intensive collaborations with other publishers in the industry. Schott has been doing sales and manufacturing for Boosey & Hawkes since 2004 and for the music publisher MP Belaieff founded by Mitrofan Petrowitsch Beljajew since 2006 .

The publishing program is very extensive and varied: with sheet music (for purchase and for hire), complete editions, scores, choral music, instrumental schools and other educational editions, popular music and books on general music topics and musicological issues. In the Edition Schott Werkausgaben appear to music of all periods for all instruments and ensembles. Schott Music is characterized above all by its constant commitment to music education and contemporary music. The publisher exploits existing copyrights and regularly takes on new composers.

Schott Music has its own record labels , Intuition for jazz and world music and WERGO for new music . The publisher also publishes seven specialist journals:

Klasse Musik has not been published as a separate magazine since the beginning of 2008, but has been absorbed in music and education .