The Wolfsberg district is a political district in the Austrian state of Carinthia .

The Wolfsberg district is divided into nine communities , including three towns and four market communities . The number of inhabitants as of January 1, 2020 are in brackets.

There were once 32 parishes in the Wolfsberg district. Before the most recent community reform in January 1973, there were 23:

2.3% of the population work in agriculture and forestry ( primary sector according to the NACE definition). That is well above the average for Carinthia (0.9%) and Austria (0.7%). The production sector is even more pronounced: 42.6% compared to 26.4% in Carinthia and 25.2% in Austria. The share in the service sector is correspondingly lower:

The number of agricultural and forestry operations in the Wolfsberg district is falling continuously, the number fell from 1,955 in 2006 to 1,671 in 2017.

In the valley areas, grain maize is predominantly grown with pigs and chickens. Fruit is grown in the Lower Lavant Valley, especially apples for must and schnapps products. In 2018, 2 million kilograms of fruit were processed. At higher altitudes and also in the Upper Lavant Valley, grassland management predominates. With 36,528 animals, the district had the highest herd of cattle in Carinthia in 2017. The timber industry with the large spruce stands on Koralpe and Saualpe is also of great importance . In 2017, 227,000 cubic meters of wood were sold in the district , of which 212,000 cubic meters were softwood .

Overnight stays in the tourism year 2017 (in thousands) 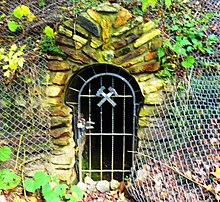 Iron mica ( hematite ) near Waldenstein is currently being mined in the Wolfsberg district . Hematite is mainly used for anti-corrosion coatings. For on the Koralpe lying lithium -Occurrence drill testing have been conducted since the 2016th Commercial dismantling is planned for 2021.

Districts and statutory cities in Carinthia