Lavamünd is located in the south-east of Carinthia on a headland at the confluence of the Lavant and the Drau , which also forms the southern boundary of the municipality. The height is 348 m above sea level, making Lavamünd the lowest point in Carinthia. In order to protect Lavamünd from a hundred-year flood, the construction of a 1.5 km long protective wall began on October 16, 2018, and two new bridges will be built over the Lavant, so that there should be no more blockages. The flood protection should be completed by 2023.

The municipality includes the following 20 localities (the number of inhabitants as of January 1, 2020 in brackets):

View over the market square

The community area near the Elbitz, an area east of the mouth of the Lavant into the Drau , was already settled in Roman times, as finds from graves and coins show, so that the oldest settlement in today's Lavamünd was established here. A tomb of a Roman stone grave, which today stands in front of the Gasthaus zum Adler, bears witness to this time.

In 1091, Count Engelbert von Spanheim gave the St. Paul Monastery, which he had founded, a Stadelhof zu Lavamünd. A street market developed at the foot of the castle by the 14th century, which gained importance due to its location at the meeting of Lavant and Drava. The foundation of the Lavamünd market is presumed to have been in 1240, the first written mention of the place comes from the year 1334. In 1461 Emperor Friedrich III. the blood judiciary market .

The village was hit by floods from the Drava several times , in 1851 even the main square was flooded.

With the construction of the Lavant Valley Railway in 1878, Lavamünd was made accessible by the railway. In 1879 the first train went from Wolfsberg to Unterdrauburg (today's Dravograd ) via Lavamünd. After the First World War, the Unterdrauburg railway junction fell to what was then the SHS state. The corridor traffic was operated by the 1965th With the construction of the Jauntalbahn , an inland connection from Wolfsberg to Klagenfurt was created again, but the Jauntalbahn branches off from the Lavanttalbahn at St. Paul in Lavanttal. So Lavamünd was on a dead track to Yugoslavia. The section Lavamünd - Unterdrauburg was removed after the opening of the Jauntalbahn.

The language border ran at Lavamünd at least until the 19th century.

After the First World War , on December 3, 1918 , Yugoslav troops marched into Lavamünd and St. Paul via Unterdrauburg and threatened to penetrate further into the Lavant Valley. In the course of the Carinthian defensive battle , Lavamünd was liberated before the end of the year. An armistice followed, which was broken on April 29, 1919 by a renewed Yugoslav offensive. As a result, Lavamünd was occupied again by Yugoslavia until the Carinthian referendum on October 10, 1920. In the referendum, the demarcation line ran directly through the municipality. In the vote, 92.9% of the community in Lavamünd voted for Austria. Since this was the second best result for Austria, the motif of the municipal coat of arms was changed from a bowl with Johannishaupt to a stylized ballot box in 1959.

From 1991 to 2001 Lavamünd had a positive birth balance (+121), but a negative migration balance (-391). In the following 10 years there were already 24 deaths more than births and 400 more people moved away from the community than immigrated. 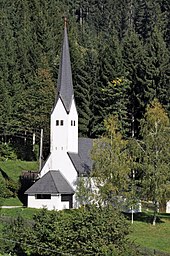 The Lavamünd market has had a market coat of arms since the 17th century. H. the severed head of John on a dish, showed. After the community felt that the drastic depiction was no longer up-to-date, the decision was made in 1959 for a new municipal coat of arms. It was decided to use a stylized representation of the referendum of 1920 : A ballot box in confused colors with a green ballot (as a commitment for Austria, the ballot for Yugoslavia was white) reminds that the community with 96.9% went to Pustritz during the plebiscite (now part of the municipality of Griffen ) brought the best result for Austria. The silver wavy lines for the Lavant and Drau rivers stand in the base of the shield.

The official blazon of the municipal coat of arms reads: “A shield divided by a silver line, the lower blue field of which is divided by two silver wavy lines. In the upper field, split by gold and blue, an urn in alternating colors, resting on the dividing line, growing out of the column line, from which the upper part of a slanted green ballot protrudes. "

The coat of arms and flag were awarded to the community on March 1, 1963. The flag is blue and yellow with an incorporated coat of arms.

Cities and communities in the Wolfsberg district