Majorities after the 2015 municipal council elections in Carinthia. 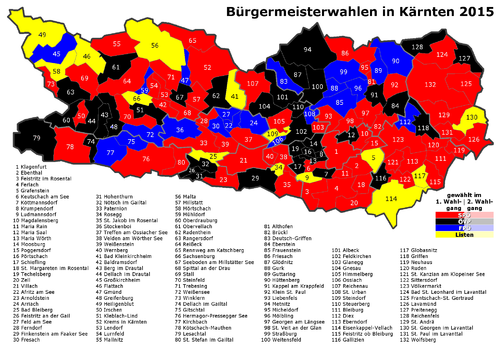 Mayoral elections 2015 in Carinthia including the results of the runoff elections.

464,364 people were eligible to vote, an increase of 6,599 people (+1.42 percent) compared to 2009. The reason for this is that citizens from other EU countries who have a regular main residence in Carinthia are entitled to vote. In all of Carinthia there are 25,702 people (5.54 percent of all eligible voters), an increase of 9,371 people.

At the meeting of the Carinthian Parliament , the following election calendar was decided:

Majorities after the municipal council elections in Carinthia in 2009

In the municipal council elections in Carinthia, 514 parties and lists of names ran in the 132 municipalities. 2,500 mandates were awarded. The proportion of female candidates was around eight percent.

In addition, there were 70 lists of names, independent lists and lists with party affiliation. Among them were some curiosities, such as the Die Freiheitlichen in Gurk - List of Mayor Siegfried Kampl , although the FPÖ had excluded Siegfried Kampl from the party because of his testimony about National Socialism . Under a separate list called The Party outdoors - List Gerhard Oleschko in occurs Keutschach the reigning FPÖ Mayor Gerhard Oleschko against the FPÖ and against five other candidates.

A total of 432 candidates applied for the position of mayor in the direct election. In 6 municipalities, this election was only a matter of form, as only one candidate stood. 35 of the 432 applicants were women, including the two mayors Christine Ploner ( Dellach im Gailtal ) and Sonya Feinig ( Feistritz im Rosental ) , who were already in office before the election . The third incumbent mayor, the former member of the National Council, Marialuise Mittermüller , no longer stood as a top candidate in Steindorf am Ossiacher See . The narrowest lead in the mayoral election was in Weißensee , where Johann Weichsler (SPÖ) won with a majority of 3 votes.

Not all ruling mayors stood for election in 2015. So were Villach since 1987 acting mayor helmut manzenreiter already known on 12 June 2014 not to run. Other long-term mayors such as Gerhard Mock ( St. Veit an der Glan ) or Siegfried Kampl (mayor of Gurk since 1991 ), who is now 78 years old and also the oldest mayor in Carinthia, also ran in 2015.

Since the municipal council and mayoral elections in 2009 took place at the same time as the state elections, the turnout was a high 80.62 percent. In 2003 only 75.72 percent of those eligible went to the polls.

The right to vote for EU citizens in the 823-souls (as of January 1, 2014) community of Hohenthurn , where the wellness club is one of the largest brothels in Carinthia , caused irritation . In December 2014 there were 30 women registered there, mainly from Romania , who are therefore all eligible to vote. The number of eligible voters increased to 711, which could have an impact on the distribution of mandates. The SPÖ saw this as a “massive shift in the actual political situation”. According to SPÖ leader Thomas Galle, it was not about discriminating against women , but about the fact that it is unusual "that the 30 women had registered their main residence at the same address". ÖVP Mayor Florian Tschinderle emphasized that he had to adhere to the legal provisions. The dispute over the right to vote for prostitutes also made headlines in the national media.

Every Austrian citizen and every citizen of another member state of the European Union who has reached the age of 16 on election day at the latest, is not excluded from the right to vote and has his main residence in the municipality is entitled to vote.

All those persons who are actively entitled to vote and who have reached the age of 18 on election day at the latest have the right to vote in municipal council and mayor elections.

As mayor, only the list leaders in the election proposal of a campaigning party for the municipal council are eligible. The prerequisite is that they have Austrian citizenship.

The municipal councils are determined according to the following key:

The mayor is elected who has received more than half of the valid votes cast. If there is only one candidate standing for election, “yes” must be ticked on the majority of the valid ballot papers submitted, provided that this candidate is also a member of the local council due to the result of the municipal council election.

If no candidate has a majority for himself or if the candidate who has achieved a majority has not also been elected a member of the municipal council, a runoff election will take place on the second Sunday after the first ballot. Only those two candidates who received the most votes in the first ballot in the election for mayor are allowed to participate. If several candidates received the same number of votes, the lot decides which candidate will be put into the runoff election.

Not to be elected

In each municipality, two deputy mayors are to be elected by the municipal council.

Detailed results of the municipalities

The detailed results of all municipalities in Carinthia can be found in the table Political conditions after the municipal council elections in Carinthia 2015 .

The SPÖ was able to achieve a majority in 63 municipalities (47.7 percent), and in 26 municipalities it even achieved an absolute majority (more than 50 percent). This is 6 more than in the municipal council elections in 2009. New majorities were possible in Feld am See , Keutschach am See , Klagenfurt am Wörthersee , Lurnfeld , Neuhaus , Reichenau and Winklern (each from the predecessors of the FPÖ), in Köttmannsdorf , in Krumpendorf and in Maria Rain (each from the ÖVP) as well as in Feistritz ob Bleiburg , in Frantschach-St. Gertraud and in Reißeck (each from lists). Previous majorities were lost in Kappel am Krappfeld , Nötsch im Gailtal and Reichenfels (each to the ÖVP) as well as in Eisenkappel-Vellach , Himmelberg , Radenthein and Rosegg (each to lists).

The SPÖ received the highest share of the vote in Micheldorf with 67.55 percent, closely followed by Arnoldstein with 67.30 percent. The smallest majority was in Klagenfurt am Wörthersee with just 30.66 percent.

Due to the political confusion of the last years - change of mandataries from FPÖ ( Freedom Party Austria ) to FPK ( Die Freiheitlichen in Kärnten ), from FPK to BZÖ ( Alliance Future Austria ), from BZÖ to FPÖ '09 and then back to FPÖ - is it is problematic to make comparisons when interpreting the election results.

The greatest success for the Greens was in Millstatt am See , where they achieved 21.92 percent right from the start and with five mandates only two seats less than the SPÖ and ÖVP. The success in Althofen is also remarkable , where they immediately achieved 17.52 percent and are now represented on the municipal council with four mandates. There was also great joy about the result in Krumpendorf am Wörthersee , where they were able to win 8.42 percent and three mandates and are now represented with 4 seats in the municipal council, as well as in Maria Saal , where they also have four mandates, but only one mandate could win.

With two mandates each, the Greens were able to move into the municipal council in Feistritz im Rosental , Nötsch im Gailtal , Pörtschach am Wörther See , Ossiach and Steindorf am Ossiachersee . They are also new to the municipal council, each with a mandate in Bad St. Leonhard in Lavanttal , in Ebenthal in Carinthia , in Gurk , in Magdalensberg , in Moosburg , in Paternion , in Radenthein , in Steuerberg , in St. Andrä , in St. Jakob in the Rosental , in Velden am Wörthersee and in Wernberg .

There were gains for the Greens in Klagenfurt am Wörthersee, where they were able to win two mandates and are now the fourth strongest member of the municipal council with seven mandates. They also gained two mandates in Villach. They each won a mandate in Feldkirchen in Carinthia , in Finkenstein am Faakersee , in Spittal an der Drau , in St. Veit an der Glan , in Völkermarkt and in Wolfsberg . In Mallnitz , the Greens lost their previous mandate.

The NEOS competed in seven parishes. They managed to move into Wolfsberg with 8.69 percent and three seats in the local council. In Krumpendorf am Wörthersee, Klagenfurt am Wörthersee, Spittal an der Drau and Villach they each received one mandate. There were no mandates for the candidacies in Feldkirchen in Carinthia and in Ferlach.

The success of the FPÖ-affiliated list Die Freiheitlichen in Gurk / Pisweg, List of Mayor Siegfried Kampl in Gurk came unexpectedly because the now 78-year-old was not expected until September 17, 2014 because of his National Socialist statements about “imminent danger” of the state party chairman Christian Ragger , was excluded from the FPÖ under pressure from Federal Party leader Heinz-Christian Strache . The occasion was an interview with the Kleine Zeitung , in which Kampl had declared "I only distance myself from what you have done, not from National Socialism." The Carinthian political scientist Kathrin Stainer-Hämmerle was surprised. She said in ORF-Kärnten, “The result in Gurk will be gratefully received by the media outside of Carinthia. Of course, that will not be very beneficial for Carinthia's image. "

In 95 (71.97 percent) of the 132 municipalities, the mayor was elected in the first ballot. In 37 municipalities (28.03 percent), runoff elections for the head of the municipality were required because no candidate was able to jump the 50 percent hurdle required.

The runoff elections took place on March 15, 2015 and brought some surprises. In the state capital Klagenfurt, for example, the previous deputy mayor Maria-Luise Mathiaschitz (SPÖ) was able to prevail against the current mayor Christian Scheider (FPÖ). In the first ballot, Scheider was just ahead of the game with 31.08: 30.08 percent, but Mathiaschitz prevailed in the decisive runoff election with 53.31: 46.69 percent. With this, the SPÖ has taken over the leading role in Klagenfurt again after 42 years and the state capital has a woman at the top for the first time. Mathiaschitz announced that he would form a coalition with the ÖVP and the Greens , so that Scheider, who will not resign, has to go into opposition because Mathiaschitz has ruled out a cooperation with the FPÖ.

Also in the district capital Feldkirchen in Carinthia , the mayor Robert Strießnig (SPÖ), who was still ahead with 47.69: 32.89 percent after the first ballot, suffered a disappointing defeat against challenger Martin Treffner (ÖVP). With 52.01: 47.99 percent, Strießnig, who announced his resignation from politics on election day, was voted out. The choice came as a surprise for Treffner himself, as the ÖVP has neither a majority in the city senate nor in the local council. The entrepreneur therefore wants to invite all political groups to cooperate.

There was an extremely close election result in the district capital Hermagor-Pressegger See , where the incumbent SPÖ mayor Siegfried Ronacher was able to assert himself with just seven votes against his challenger Leopold Astner (ÖVP). Ronacher was still clearly ahead in the first ballot with 39.70: 34.60 percent. Astner will therefore gladly accept the office of Vice Mayor.

For the first time in the history of the mayoral elections in Carinthia, a second runoff election for the mayor was necessary after the first runoff, as again neither of the two candidates could prevail. That is why the citizens of the Preitenegg community were asked to vote again on March 29, 2015. Only then could the mayor Franz Kogler (ÖVP), who has been in office since 2003, prevail against his opponent Rochus Münzer (SPÖ) with 407: 372 votes and remain in office. The “secret” of his success was that he and his party colleagues went on a promotional tour with direct talks and house calls. There is no other explanation for the unusually high turnout of 95 percent.

Results of the runoff elections

Overview of all mayors

For a complete overview, see the separate article Elected Mayors in Carinthia 2015 .