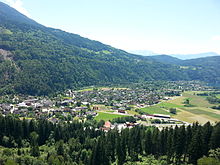 Radenthein is an Austrian municipality with 5782 inhabitants (as of January 1, 2020) in the district of Spittal an der Drau in the state of Carinthia .

Radenthein is located in the region valley northeast of Lake Millstatt at the foot of the Nockberge .

The municipality comprises the following 16 localities (population in brackets as of January 1, 2020):

There is evidence of mining activity around Radenthein as early as the end of the Middle Ages. The first hammer mill for iron processing was operated on the site of today's magnesite works ; melting furnaces were used since the end of the 18th century. The lower district to the right and left of the Kaninger Bach was called Niederdellach before the settlement became part of Radenthein . The place was mentioned for a long time as independent with hammer mill on the Kirchheimer Bach.

Garnet stones were mined in the adjacent Garnet Gorge. Grenades were mined on the Millstätter Alpe until 1914 in a ravine along the Kaninger Bach in the Lucknergraben.

As early as 1860, magnesite stone from the Millstätter Alpe was used for the lining of the Radenthein blast furnaces.

In 1904 the magnesite deposit was explored in the Globatschbachtal on the northeast side of the Millstätter Alpe . The choice of location fell on Radenthein, where the industrial exploitation of the deposit began in 1908 with the construction of a considerable magnesite plant. A total of six shaft furnaces with all associated systems were built there.

The industrialization resulted in a doubling of the population between 1900 and 1910 and also a permanent population growth. The first director Emil Winter was made an honorary citizen of the community in 1933; he also financed the first swimming pool in Radenthein.

In the 1920s, the right to mine the magnesite deposits in Hochfilzen was acquired and merged with Allgemeine Automobil GmbH in Vienna to form the “Austro American Magnesite Company” (now part of RHI AG ).

At the time of the 2001 census, Radenthein had 6,620 inhabitants, 96.2% of whom were Austrian citizens . 62.7% of the population professed the Roman Catholic Church , 28.1% the Evangelical Church and 1.1% Islam . 0.3% belonged to the Orthodox Church and 7.2% of the residents did not profess any religious beliefs. 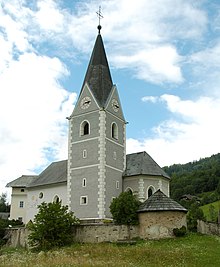 The people of Radentheiner are available for sport and leisure activities:

Public transport is carried out by ÖBB-Postbus GmbH. On weekdays, regular buses run to the train stations in Spittal an der Drau and Villach . During the school days, the branch line to Kaning is also served by five pairs of courses. In the night from Saturday to Sunday there is also the possibility of taking the night bus to Spittal or Villach and back until 2 a.m.

In winter there is also a free ski bus from Döbriach to Bad Kleinkirchheim , which also stops in Radenthein.

Radenthein is best known for its mine, which has been in existence since 1908. The product name RADEX, which is still used today, is made up of RADenthein and EXport. Until 1965 the Austrian-American Magnesit AG (now RHI AG ) operated the quarrying of the rock in open-cast mining , in the so-called "quarry". Today the rock is only extracted underground in tunnels. Refractory materials are made from magnesite, which are particularly indispensable in the steel and iron industry, but also in the cement and glass industries.

Also in the magnesite city are RCE Industrieofenbau Engineering GmbH (a subsidiary of MAERZ Ofenbau AG), which was founded in 1976 by Radex Austria AG to market internally developed refractory know-how.

Tourism also plays an important role, especially in the village of Döbriach on Lake Millstatt.

The official blazon of the coat of arms reads: “A shield, raised from red to gold, with a narrow black border. The upper field is pierced at its heart by a silver circle, from which emanate 12, arranged in the form of a stand, broadening, likewise silver rays; the circle is covered with a cut, yellowish-brown gemstone. In the lower field appears a striding, black, red-tongued and armored lion with raised right front paw. "

The flag is red and yellow with an incorporated coat of arms.

The following people were honored for their services by the municipality of Radenthein:

Sons and daughters of the township

Cities and municipalities in the Spittal an der Drau district