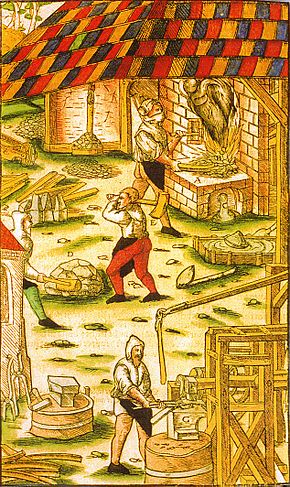 Eisenhammer: In the background you can see the racing furnace , in front of it a rag is roughly cleared of cinder residue. In the foreground, the bob is being forged under the hammer (source: Agricola, Georgius (1556): De re metallica libri XII. - Basel.)

A hammer forge in Bad Hindelang

An iron hammer is a workshop for the manufacture of wrought iron as semi-finished products and consumer goods made from it from the time before industrialization . The name-giving feature of this hammer forge was the water-powered tail hammer . The hammer was lifted by a shaft on which radial "thumbs" (see also camshaft ) were attached, which periodically pressed down the end of the hammer handle and thus raised the hammer head. When falling up and down, the latter moved in a circular line . The Hammerbahn was steeled for long-term use.

Initially, the ore was processed in factories that were only moved by muscle power (in so-called pedal huts or fabricae pedales ). These huts were not located on rivers, but near the iron ore deposits, mostly on the slopes of mountains. With the introduction of forge hammers and bellows powered by water power in the 14th century, hammer mills were founded on rivers and streams. In the 19th century the works were operated by steam power; this innovation caught on when the workpieces to be machined became larger and larger over time and were difficult to machine by hand.

The ore to be processed has already been pre-cleaned underground. It then first had to be roasted and chopped to the size of a nut . Before it was crushed by machines, the ore was crushed by hand. The ore chunks were then picked out on "klaubtischen" and again cleaned of loamy parts in a washing process. The iron hammers smelted iron ore with charcoal (sometimes also with peat ) in so-called racing stoves ( Georgius Agricola 1556, also known as "racing fire" or "racing furnace": from the "draining" of the slag or "Zerenn-" or "Zrennherd" from the melting ) . In these smelting furnaces, which were also equipped with bellows operated by water power, the ore was melted after a three to four hour "cutting" into a glowing lump of about 175 kg of raw soft iron and coal residues. During the smelting process, the liquid slag , which still contained up to 50% iron, drained again and again. During this process, the iron did not become liquid like in a blast furnace , but remained a "doughy" and porous lump. This historic Luppe -called lump, as because of its porous consistency sponge iron called, was initially manually using sledgehammers compacted. The iron was then forged several times with the mechanical tail hammer or sledgehammer until all slag and coal residues were removed. For this, the iron in a (was Eat ), fire extinguishing or fire hearth or corrugated called heated. The forged iron could then be used directly as soft wrought iron . A subsequent remuneration process such as refining in the blast furnace process was not necessary. When heated in the corrugated fire, liquid Deucheleisen was also formed , which collected in the bottom of the corrugated hearth. This "zwieschmolzene Deuchel" was traded and processed separately.

The resulting coarse bar iron was partly forged externally in separate small hammer hammers into thin iron bars (or strong wires ), the so-called tooth iron , which was needed by nail smiths for the production of nails , for example . Further processing to the so-called fermentation steel ( refining steel ), elastic steel, as z. B. for epee blades , was carried out by specialized refining hammers or by blacksmiths on site.

Inside of the Bremeck hammer

Inside view of the Bremeck hammer

As early as the 13th century, an iron hammer was usually the union of a smelter and a processing facility. But there were also cases where only one smelter was operated (e.g. the Pielenhofen ironworks ) and the pellet was given to smelters for further processing. This also determined the appearance of a hammer hut: the mostly two chimneys were characteristic : one for extracting the smoke from the racing furnace, which was used to extract the pig iron, the other for the forge furnace for forging under a water-powered hammer . There were also two (or more) water wheels to drive the bellows and the forging hammers. The interior of a hammer workshop consisted of the two herds mentioned, the bellows made of wood and pigskin, one or more water-powered tail hammers each with a hammer stick, smaller and larger anvils and a variety of other handicraft and blacksmith tools.

Workers in a hammer mill

A hammer was owned by a hammer gentleman. This often gained respect, performed important local functions (mayor, council member) and occasionally rose to the lower nobility (e.g. the Sauerzapf or the Moller von Heitzenhofen ).

For the operation of a hammer, a “hut caper” was usually employed, who organized the work processes of a hut as hammer master or supervisor. If several wax burners were operated, a shift supervisor also had to be employed.

The next most important person was the "Zerenner" (also called "Zerennmeister"), who was responsible for the correct loading of the furnace with charcoal and ore and the tapping . The quantity and quality of the iron obtained depended on his skill and the accuracy of his work. He was assisted by one or more “Zerennknechte” who brought ore and coal into the smelter, removed the iron slugs from the furnace and removed the slag produced during the smelting process.

A hut also employed one or more "Handpreu" (also called "Handprein"); they were assistants employed in a hammer. One of them was the "Hauer" or "Kohlzieher", who was responsible for providing charcoal.

A blacksmith master worked with one or more blacksmiths on the well and the tail hammer. They forged the shell into commercially available iron rails or rods.

The "Kohlmesser", also known as the "Kohlvogt", assumed an official function. Each hammer owner had to have the amount of coal delivered and processed by an ordered coal knife recorded. If this was not done, severe penalties threatened. The amount of coal was entered in a kerbholz , half of which was given to the hammer owner and the other half to the charcoal burner , in order to be able to make an exact account to the forester. The cabbage knives were sworn in and were only allowed to measure the coals according to the calibrated measurements under threat of punishment. This was important because the hammer lords were given a certain amount of charcoal, measured in buckets and barriers, from the manorial forests .

An iron hammer had to employ more servants and one or more wagoners to keep the business going. Occasionally, charcoal burners , known as “assassins”, were employed by a hammer. One can assume at least eight people employed in an iron hammer, whereby this number could also increase to 80 (e.g. for the Heitzenhofen hammer ).

In hammer mills, a distinction has to be made between iron- producing and iron- processing plants. The former include the tibia and bar hammers to the latter, the sheet metal , wire , Zain- , stretching , refining and ball hammers and Zeug- and weapons hammers .

Geographically, the iron hammers were dependent on the availability of water power (see hammer mill ). At the same time, forests had to guarantee the production of large quantities of charcoal. In addition, there had to be iron ore deposits in the vicinity in order to enable short transport routes for the iron-bearing rock to smelting. Agriculturally usable areas were also important for feeding the many workers needed.

Iron hammers were widely used from the late Middle Ages

In these areas there were iron deposits that could be extracted with the means available at the time. There was a high density of several hundred systems in the Wupperviereck .

The Upper Palatinate was one of the European centers, which earned it the nickname "Ruhr area of ​​the Middle Ages" due to the many hammer mills. Place names ending in -hammer are very common in this area. The manor house belonging to an iron hammer is known as the hammer lock. These mostly inconspicuous castle complexes, which served as the seat of the hammer lords, are usually located in the immediate vicinity of the hammer mill. There are significant hammer locks along the Bavarian Iron Road , for example in Theuern , Dietldorf and Schmidmühlen .

In Austria, iron hammers were particularly widespread in the Eisenwurzen along the Austrian Iron Road in the triangle of Lower Austria - Styria - Upper Austria (e.g. Ybbsitz ) and in the Upper Styrian valleys of the Mur and Mürz and their side valleys. The seats of the Hammerherren (Black Counts) there are called Hammerherrenhäuser .

15 hammer smiths have survived in Switzerland.

Typical products of the iron hammers were

These products ended up on the market as semi-finished products , but in some cases they were also processed into end products such as scythes , sickles , shovels , weapons or tack in the production plant. 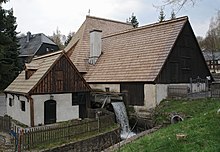 Exterior view of the Frohnauer Hammer

Interior view of the forge of the Frohnau hammer including the hammer shaft, three tail hammers and the linkage of the bellows 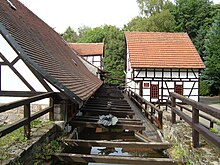 Tail hammers in the Tobias hammer

Most of the facilities listed here have been preserved and are open to the public as a museum.

The Bavarian Iron Road is an important and historic holiday route in southern Germany, which, over a length of 120 km, connects numerous historical industrial sites from several centuries with cultural and natural monuments. Part of it is the Sulzbacher Bergbaupfad . The Bavarian Iron Road runs along old traffic routes from the Nuremberg region near Pegnitz in a southerly direction to Regensburg and connects the former iron centers of Eastern Bavaria , namely the Pegnitz, Auerbach , Edelsfeld , Sulzbach-Rosenberg and Amberg districts . From there it becomes an approximately 60 km long waterway on the rivers Vils and Naab to their confluence with the Danube near Regensburg.

The iron hammer got its firm place in literature through Friedrich Schiller's ballad Der Gang nach dem Eisenhammer (1797), which was set to music by Bernhard Anselm Weber for the actor August Wilhelm Iffland as a great orchestral melodrama and later arranged as a fully composed ballad by Carl Loewe .