The title of this article is ambiguous. Further meanings are listed under Köhler (disambiguation) . 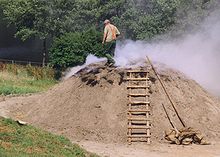 A charcoal burner on his charcoal pile

Köhler (also Kohler, Kähler or Kohlbrenner) describes a profession whose job it is to produce charcoal . To do this, wood is charred in a charcoal kiln. The associated craft business or activity is called charcoal burning .

In contrast to other trades, the charcoal burner is not a training profession.

Charcoal burning is one of the oldest handicraft techniques known to man. The knowledge and products from charcoal burning still make an important contribution to the industry today, for example, the Schwäbische Hüttenwerke in Aalen uses charcoal for hardening brake discs in cars, Daimler in Stuttgart uses the consistently long-lasting heat to repair molds in which Engine blocks are cast and Weleda in Schwäbisch Gmünd uses them to produce charcoal compretten against diarrhea. Due to their historical and cultural significance, the charcoal burner trade and tar smelling were included in the list of intangible cultural heritage in Germany by the Conference of Ministers of Education and Cultural Affairs in December 2014 .

Since the Middle Ages charcoal is in kilns manufactured for iron smelting , but also for glass production and processing of precious metals . With the increased use of hard coal from the 18th century, the charcoal industry then declined more and more.

In Europe, the non-industrial charcoal burning is only sporadically operated, in Hasselfelde (Harz) [1] or in Heidenheim near Aalen are probably among the last charcoal burners in Germany. In the areas around the Napf in central Switzerland , around fifteen charcoal burners produce around ninety to one hundred tons of charcoal per year and form the largest concentration of charcoal burners in Central Europe. Outside of Central and Northern Europe, the charcoal burning is still operated commercially. Only rudimentary in Europe, for example in Romania, otherwise in the tropical forests of South America and Africa. Until well into the 20th century, charcoal burners in wooded areas, such as in the Harz and the Thuringian Forest , used Hillebill (sounding beech wood boards) as an alarm and information instrument . The name of a mountain range in the Harz Mountains called "Hillebille" still reminds us of these times . Today, the tradition of this old craft is largely upheld by associations, including the European charcoal association and the Glasofen charcoal association.

In the mid-1960s there were still two charcoal burners in the Black Forest: one near Enzklösterle , which supplied the Pforzheim gold goods industry, and one in Langenbach in Untermünstertal , whose customers were nearby metal goods factories.

Since the beginning of the 20th century, charcoal has been increasingly industrially produced by charring. Production is mainly carried out by chemical companies such as Degussa , Bayer and Hoechst . The companies are less concerned with charcoal. They are more interested in the extraction of chemical products such as wood vinegar , wood gas and tar , which are produced during the charring process. Charcoal itself is used for filter technology or also for black powder production.

The charcoal burning process is associated with considerable damage to the air and soil. About a third of the dry weight of wood is emitted into the atmosphere in the form of pyrolysis products . Another part of the pyrolysis products that occur as liquids, such as wood tar , is responsible for soil contamination .

Dealing with nature: falconry  | Finch maneuvers in the Harz Mountains  | Inner-city horticulture in Bamberg  | Kneipp - traditional knowledge and practice based on the teachings of Sebastian Kneipp | Traditional river fishing where the Sieg flows into the Rhine