The passage to the iron hammer

Beginning of the ballad in Schiller's Muses Almanac for 1798

The walk to the iron hammer is a ballad by Friedrich Schiller . He wrote it in the autumn of the ballad year 1797. It was first published in the Musenalmanach for the year 1798 edited by Schiller. 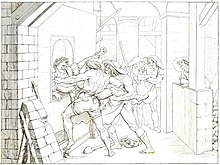 Illustration by Moritz Retzsch (1837): The farmhands throw Robert the hunter into the oven instead of Fridolin.

The servant Fridolin is loyal to his mistress Kunigunde, the Countess of Saverne . The envious hunter Robert, however, indicates to the count that the countess is in love with the page. The enraged count then orders the farmhands working in an iron hammer to throw the supposed rival into the furnace. But because Fridolin helps out as an altar boy at a mass on the way there , there is a mix-up; instead of him, the servants seize the slanderer Robert, who thus receives his just punishment. The deeply moved Count brings Fridolin back to the Countess with the words:

"This child, no angel is so pure,
Let your grace be recommended , No matter
how badly we were advised,
with him is God and his hosts."

Schiller wrote the ballad for the Musenalmanach in September 1797 after he happened upon the material, as can be seen in a letter he wrote to Johann Wolfgang von Goethe on September 22, 1797 . After reading it on October 30, 1797, he judged: “You have hardly done anything with such happy humor and the retarding mass is of the best effect.” Schiller's friend Christian Gottfried Körner felt a “special charm through the Christian - Catholic tone - Old German piety ”(letter of March 26, 1798) as well as“ something warm ”through the idea of ​​divine providence.

Schiller's publication of the ballad as part of an anthology, a delicate muse almanac for the year 1798 , seems to have originally been intended as quiet reading material. At that time, however, poems and ballads were not primarily intended for individual readers to read. Rather, they were intended for lectures in smaller private and larger public auditoriums, and they were often not just read, but rather pronounced by heart with a raised voice. The custom of higher and bourgeois circles to consume literary products to the sounds of instruments or framed by preluding on the piano helped to visualize the dramatic contents of what was read and the feelings of their protagonists.

Shortly after the Berlin premiere of Franz Ignaz von Holbein's play Fridolin on November 30, 1807 with a musical interlude, Bernhard Anselm Weber had - apparently ordered or at least initiated by his theater director August Wilhelm Iffland  - also the presentation of the play, Schiller's Ballad, as a melodrama Set to music with choir and orchestra accompaniment. The generally high appreciation of his composition can be seen in numerous contemporary discussions, and the later adaptation of the work (1829) by Carl Loewe can be seen as an indicator of his popularity. The piece was first performed publicly on February 25, 1808 in Berlin by Iffland as part of a “mus. Academy in the theater "of the theater on the Gendarmenmarkt ," which was "one of the most interesting entertainments this winter".

In Der Fackel of 1927, Karl Kraus expressed disrespect for Schiller's Eisenhammer ballad in an essay on rhymes in German literature: “Fridolin is still in the 'third period' - in one of the most embarrassing poems whose fame ever found its rhyme in philistineism - 'devoted to the mistress' ”.

Wikisource: The walk to the iron hammer  - sources and full texts