This article deals with the ballad by Friedrich Schiller; for the feature film by Günter Schwaiger see Der Taucher (2019) . 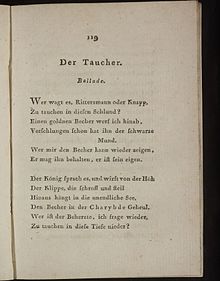 The ballad The diver wrote Friedrich Schiller in ballads year 1797 for which he edited Muses Almanac for 1798 . It describes the daring of a noble boy who plunges into the sea whirlpool known as the Charybdis ' chasm in order to win the golden cup that his king thrown into it. He succeeds in bringing the cup back, and he reports in detail about the horrors of the depths that he has lived through, but without reaching the sea floor ( It is happy who breathes in the rose light. / But man does not try the gods ... ). The king promises him a precious ring with the cup if he tries the descent again and brings him news of the deepest sea bottom . The king's daughter begs her father to stop the cruel game . But the king throws the cup into the vortex again and promises the young man not only to make him the most excellent knight , but also to give him his daughter as a wife. The youth cannot resist this temptation. Again he plunges down to life and death , but this time the rising surf does not bring him back to the surface.

Who dares, Rittersmann or Knapp,
to dive into this gorge?
I throw down a golden cup,
the black mouth has already devoured it.
Whoever can show me the cup again,
he may keep it, it is his own.

The king spoke it, and threw the cup in the Charybde howling from the height of
the cliff, which
hangs steeply and steeply in the infinite sea . Who is the brave one, I ask again, To dive into this depth?

To the history of the motif

The ballad is based on an older mythical subject. The place of the incident is Sicily (cf. the Charybde howling ). Schiller, who never saw the sea his entire life, found out about the " pointed corals ", the " prickly Roche ", the " cliff fish " , " the hammer's grayish shape " and the " horrific Hay " names the ballad, presumably from the "two fish books" that Goethe had lent him and had him picked up on June 16, 1797.

In the meantime the ballad had been completed with Goethe's lively sympathy: “Live well and the sooner your diver would rather drown”, he had written to Schiller on the 10th and on the 14th: “I [...] wish that the diver would like be happily completed "; In between, Goethe's diary notes on June 11th: "To Schiller, various things about characters, his diving romance, about comedy." On June 19th, Schiller had already finished his "little follow-up to the diver ", The Glove , and was with him the following day sent a letter to Goethe dated the 18th.

It remains to be seen what inspired Schiller in portraying the Charybdic vortex. Goethe was so impressed by it that he remembered it when he saw the Rhine Falls , which he visited on September 18, 1797 on his trip to Switzerland. On 25/26 In September he wrote to Schiller from Stafa on Lake Zurich: “I would soon have forgotten to tell you that the verse: it billows and boils and roars and hisses pp has been excellently legitimized at the Rhine Falls; it was very strange to me how he grasps the main moments of the monstrous apparition. I immediately tried to grasp the phenomenon in its parts and as a whole as it is represented, and separately noticed the considerations which one makes as well as the ideas which it arouses. One day you will see how those few poetic lines loop like a thread through this labyrinth. "

Schiller's template for the fable is the children's book Table Prayers and Conversations in Songs and Verses, especially dedicated to the youth by Christian Gottlieb Göz (1746–1803), which was printed and published in 1790 by the Hof- und Canzlei Buchdruker Christoph Friedrich Cotta had been. The Schiller family lived in a house belonging to Cotta in Ludwigsburg from 1767–1775 , and Cotta had published both Schiller's father in 1767–1769 and Schiller's medical dissertation in 1780. The aforementioned children's book tells the diving legend in the section Conversations with Children about Tables on pp. 50–52. Excerpt: “ See, said the king, I throw in this large golden cup - it will be yours when you take it out! The diver quickly jumped into the back -! "

Apparently the diver only has no name in this version and in Schiller's ballad. Otherwise it is called Nicolaus or Nicola Piscis or Pesce ( Nikolaus or Niklas Fisch), Cola (Klaus) Pesce or similar (from the Sicilian legend of Colapesce ). However, this name was completely alien to Schiller, as he wrote to Goethe on August 7, 1797: “ Herder has now also sent back to me our ballads which I had communicated to him; but what impression they made I cannot find out from his letter. On the other hand, I learn from it that in the diver I only refined a certain Nicolaus Pesce, who must either have told or sang about the same story. Do you know this Nic. Pesce, with whom I am so unexpectedly put into competition? "

In view of this, a printed model by Schiller can only have been Göze's children's book. Of course, this does not rule out that Schiller could have come across the material through oral narration, for example Goethe, who did not give the diver a name.

Christian Gottlieb Göz, for his part, used the book Useful Allerley by Quedlinburg pastor Johann August Ephraim Goeze (1731–1793), in which the diver Cola Pesce and Niklas Fisch is mentioned, as a source.

The text was set to music by Johann Heinrich Carl Bornhardt († 1843) for piano and also for guitar accompaniment.

Heinz Erhardt used the topic in his own way.