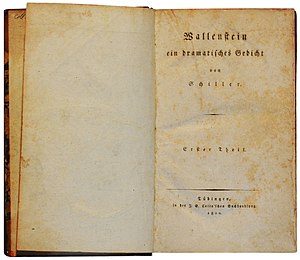 Schiller completed the trilogy in 1799.

Summary of the plot

The Capuchin in the Schiller Gallery , steel engraving by Schultheiss after a painting by Pecht , around 1859

“Wallenstein's Camp” is the introduction to the following two parts and is much shorter than this. While the main story takes place among the higher ranks of the troops and the aristocracy, “Wallenstein's camp” reflects the mood of the common people, especially the soldiers in the Wallenstein camp. The soldiers are enthusiastic about their commander-in-chief, who apparently managed to unite mercenaries from very different areas in his army. They praise that he gave them a lot of freedom outside of combat and that he stood up for the army with the emperor. Many people speak rather disparagingly about the emperor. The soldiers also praise the war, which harms civilians, but brings them (the soldiers themselves) a better life. A farmer complains that the troops are taking him out, a monk criticizes the ungodly life of the soldiers. At the end of the first part they learn that the emperor wants to subordinate part of the army to the Spanish, also Habsburgs. They decide to ask Max Piccolomini, a troop leader, to work with Wallenstein to prevent the emperor from following his wishes.

The main plot of the Wallenstein trilogy begins with the second part. The perspective changes from the simple soldiers to the leaders of the troops of Prince Wallenstein , the commander in chief of the imperial army. They gather in the camp near Pilsen and wait there for further orders. For the most part they are enthusiastic supporters of the prince and even appreciate him more than the emperor of higher rank. Wallenstein repeatedly disregarded his orders; he is at odds with the emperor. Probably to weaken Wallenstein, the emperor ordered him to relinquish part of the army. The prince does not want to accept this and is officially considering giving up command of the imperial troops. He secretly negotiates with the Emperor's opponents, the Swedes, in order to force the Emperor to make peace, and wants to keep the possibility of an alliance open with the Swedes against the Emperor. His closest confidants, his brother-in-law Terzky and Illo, urge him to do so . They let all military leaders sign a document swearing allegiance to Wallenstein. However, they let them believe that in the document loyalty to Wallenstein was restricted by loyalty to the emperor; In the version of the declaration submitted for signature, however, this restriction has been secretly removed.

Wallenstein does not know that his confidante Octavio Piccolomini , who also knows his plans, remained loyal to the emperor, spied on his behalf and was given authority to officially replace Wallenstein as commander-in-chief. Octavio only wants to use this power of attorney if Wallenstein publicly opposes the emperor. Imperial scouts succeed in intercepting a negotiator from Wallenstein on the way to the Swedes; so Wallenstein's transfer is imminent. The situation is complicated by the fact that Octavio's son Max Piccolomini   and Wallenstein's daughter Thekla fall in love. Max is an avid supporter of Wallenstein and is treated very caringly by him. He doesn't believe his father that Wallenstein wants to betray the emperor. “The Piccolomini” ends with Max's decision to ask Wallenstein about his plans. This should decide for him whether he has to stand against his own father or against Wallenstein, whom he admires.

In the last part of the Wallenstein trilogy, the conflicts presented in the second part lead to a tragic end. Wallenstein learns that his negotiator for the secret negotiations with the Swedes was intercepted by soldiers loyal to the emperor. So the emperor may now have evidence of Wallenstein's deliberations to ally himself with the official enemies against the emperor, perhaps even to overthrow him. After some doubts and through strong persuasion from Illo , Terzky and especially his wife, Countess Terzky , Wallenstein decides to officially conclude an alliance with the Swedes.

But Octavio Piccolomini , as the emperor's secret agent, succeeds in persuading almost all the important leaders from Wallenstein's army to turn away from Wallenstein. In particular, he proves Buttler that Wallenstein secretly hindered his career; the offended butler stays with Wallenstein in order to get revenge. Octavio's only son, Max Piccolomini , is torn between his loyalty to the emperor on the one hand, his admiration for Wallenstein and his love for his daughter Thekla on the other. Finally, he decides to leave Wallenstein. He tries to part with him anyway as a friend, but is rejected by Wallenstein, who then flees to Eger with his last loyal friends . Max Piccolomini throws himself suicidally into a hopeless fight against the Swedes and falls. When Thekla finds out about this, she secretly sets off to Max's grave to find the death of her lover. Wallenstein also mourns the loss, but believes that fate stole Max from him in order to make up for future happiness.

That night, Buttler's henchmen, Macdonald and Deveroux , murder the two high officers Illo and Terzky at a feast and - in his bedroom - also Wallenstein himself. The drama ends with a final dialogue between Octavio and his main antagonist, Countess Terzky, who each other previously poisoned and now dies. At the end Octavio receives the message that he has been elevated to the rank of prince by the emperor in gratitude for his loyalty. 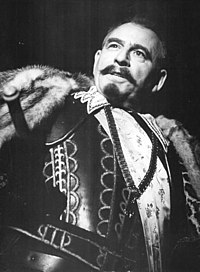 Wolfgang Heinz as Wallenstein , 1962 at the Deutsches Theater Berlin , directed by Karl Paryla

The world premieres took place in 1798–1799 at the Weimar Court Theater (today the German National Theater Weimar ) under the direction of Johann Wolfgang von Goethe :

Wallenstein is part of the classical German stage repertoire - often considerably shortened and condensed into one theater evening. The nationally acclaimed productions of the play include: