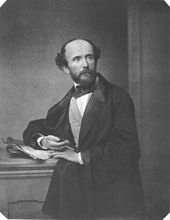 Pecht comes from the marriage between the lithographer Andreas Pecht and his wife Susanna Gänsli. He received his first artistic lessons from his father and also trained as a lithographer. At the age of 19, Pecht became a student at the royal art academy in Munich in 1833 . There he soon joined Peter Hess , Julius Schnorr von Carolsfeld and the sculptor Konrad Eberhard .

In 1833 Pecht became an assistant to Franz Hanfstaengl in Munich and went to Dresden with him in 1835 . However, through teaching at the academy, Pecht later switched from lithography to painting. After his initial success in portrait drawing, the painter Paul Delaroche took him in 1839 in Paris for two years in his studio. In the same year he was accepted into the Leipzig Freemason Lodge Minerva to the three palms . 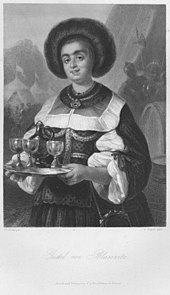 "What? the Lightning!
That's Gustel from Blasewitz ! ”
In Wallenstein's camp ( Schiller Gallery );
Steel engraving by Conrad Geyer after Pecht, around 1859 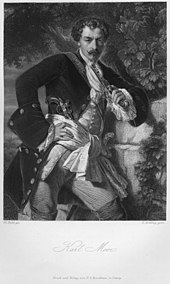 Karl Moor from The Robbers ;
Engraving from Sichling to Pecht, Schiller Gallery

In 1841 Pecht returned to Munich and settled there as a freelance painter. Until 1844 he lived alternately there and in Constance. Pecht spent the years 1844 to 1847 in Leipzig and Dresden. Between 1835 and 1850 Pecht made the acquaintance of Gustav Freytag , Heinrich Heine , Heinrich Laube , Gottfried Semper , Richard Wagner and others. v. a.

In 1852 Pecht married Clothilde Clementine, a daughter of the Württemberg finance councilor Joseph von Vogel, in Ulm . He had a daughter with her.

Pecht spent the years 1851 to 1852 and again from 1853 to 1854 in Italy. On both trips he also spent a long time in Rome to study antiquity. When he returned to Germany in 1854, he settled in Munich for the rest of his life. There his z. Large-format oil paintings from the life of Johann Wolfgang von Goethe and Friedrich Schiller ; mostly as commissioned work by the Grand Duke of Baden Leopold . Pecht also created illustrations for German classics together with Arthur von Ramberg . a. Schiller Gallery , Goethe Gallery and Lessing Gallery . To the Shakespeare gallery , which u. a. was created by Max Adamo , Pecht wrote the texts and made his debut as a knowledgeable art writer.

During these years Pecht was also commissioned to redesign a hall of the Munich Maximilianeum with several monumental works . Pecht showed meritorious generals and statesmen from Bavarian history in twelve pictures. Together with his colleague Fritz Schwörer , whom he knew from his time at the academy, Pecht was commissioned by the city of Constance to decorate the great hall of the Constance Council building . Here, too, Pecht took up the history of the city and a. represents the election of Pope Martin V of 1417. 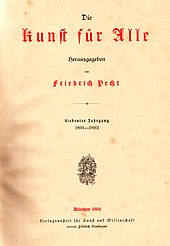 From around 1854 Pecht worked almost exclusively as an editor for the art section of the Augsburger Allgemeine Zeitung in Munich. For them he then reported exclusively on the world exhibitions in Paris ( 1867 , 1868, 1889 ) and 1873 in Vienna.

His wife died in 1874, and from then on his daughter ran his household for him.

In 1885 Pecht was entrusted with the management of the magazine Die Kunst für Alle . In addition, Pecht published in various daily newspapers (including Süddeutsche Presse (Munich), Neue Presse (Vienna), Daily Rundschau (Berlin)) on all sorts of topics relating to art, well over 1500 articles. Basically, Pecht was a representative of the conservative direction; but from 1870/71 on the Franco-Prussian War , Pecht's articles became testimony to German national consciousness .

Friedrich Pecht also wrote several articles for the Allgemeine Deutsche Biographie , including the article on the landscape painter Ernst Fries .