The German Theater ( DT ) in Friedrich-Wilhelm-Stadt in the Mitte district ( Mitte district ) in Berlin was opened in 1850 as the Friedrich-Wilhelm-Städtisches Theater and initially maintained an entertainment repertoire. From the end of the 19th century it was a privately run and financed stage with an educated middle class program . In the 20th century it was mainly used for the performance of plays, with a large proportion of classical pieces and a rather conservative audience. Since the 1990s, it is one of the four subsidized , as Regiebetriebe guided speaking stages in Berlin.

The theater building was planned in 1849/1850 by Eduard Titz on behalf of Friedrich Wilhelm Deichmann and built under his direction. Deichmann ran a casino , in whose garden a smaller stage successfully presented comedies and antics in the summer . The new building opened in 1850 under the name Friedrich-Wilhelm-Städtisches Theater with around 600 seats. The theater makers pursued a popular and entertaining claim at a time when the royal city theater - originally with the same objective - was at an end. From 1860 operettas were also performed here. The Woltersdorff Theater , which from 1883 was called the Neues Friedrich-Wilhelm-Städtisches Theater , was often confused with this new Possentheater because of the similarity of its names.

Turning away from the conversation

In 1883, the writer and theater critic Adolph L'Arronge founded with a group of wealthy actors a theater with a more sophisticated program that mixed popular folk plays with classics . He headed this German theater , which now took over the Wilhelmstadt building, until 1894. Otto Brahm followed him from 1894 to 1903 . Brahm, who, as a critic, had objected to L'Arronge that he had staged too few “good pieces”, now brought contemporary pieces of naturalism to the stage in addition to the performance of the classics and put authors such as Gerhart Hauptmann , August Strindberg and Arthur Schnitzler on the stage by.

From 1905 onwards, Max Reinhardt, who was engaged as an actor in 1895, took over the management of the house, which he also acquired in 1906. In 1906, Reinhardt had a ballroom , which was also built by F. W. Deichmann on the neighboring property in 1850, converted into another theater by William Müller , which was opened as a Kammerspiele that same year . The dramatic modernity of the time was to be made accessible to a wider audience in a narrower framework and a private atmosphere . To furnish the lobby of the Kammerspiele, Edvard Munch created the Reinhardt frieze comprising twelve paintings , a variation of his so-called life frieze .

On April 4, 1933, when Hitler came to power, the Achau and Neft management of the Reinhardt-owned theater announced that after a meeting with the inspector, Max Reinhardt would b. V. dismissed Hans Hinkel from the Prussian Ministry of Culture. Hinkel was an influential NSDAP politician who also played an important role in the KdK . Heinz Hilpert became director from 1934 and ran the house through the Nazi era until it was closed in 1944. Compared to its main competitor - the representative State Theater on Gendarmenmarkt  - the German Theater Reinhardt and Hilpert was a stage of fine nuances and soft tones with a classic -humanist program.

On September 7, 1945 the theater was reopened under the Communist Gustav von Wangenheim , who had returned from the Soviet emigration . According to tickets, the Berliners stood in line for the first performance after the end of the war, there was Lessing's Nathan the Wise and the German premiere of Our Little City by Thornton Wilder . After von Wangenheim, Wolfgang Langhoff was artistic director from 1946 to 1963, which contributed to a polarization between East and West Berlin theaters.

From 1949 to 1954, the Deutsche Theater hosted Bertolt Brecht's Berliner Ensemble as a guest under the direction of Helene Weigel . The production of Brecht's mother Courage and her children is still considered one of the most important theater productions of the post-war period . The legendary covered wagon from the production of January 11, 1949 and the costumes of Helene Weigel, who played the role of Mother Courage for the first time in this performance, are on display in the Brecht-Weigel-Haus in Buckow .

Of the many successful productions of this era, two works by the director Benno Besson stand out: The world premiere of the Aristophanes comedy Der Frieden in the version by Peter Hacks with 45 minutes of final applause and 16 curtains on October 14, 1962, and the GDR premiere of Yevgeny Schwarz ' The fairy tale parable Der Drache , which has remained on the program for over 16 years with 580 performances since its premiere on March 21, 1965.

In 1989, DT actors also took part in the demonstration on Berlin's Alexanderplatz , which is considered a milestone in the peaceful revolution in the GDR .

In addition to theater performances, the Deutsches Theater and the connected chamber plays also served as a sophisticated event space for conferences or youth consecration celebrations .

After the fall of the Wall , Wolfgang Langhoff's son Thomas Langhoff took over the management of the theater (1991–2001). From 2001 to 2008, Bernd Wilms headed the DT. Under his direction, the house once again developed into one of the leading theaters in the country. The four permanent directors Barbara Frey , Dimiter Gotscheff , Jürgen Gosch and Michael Thalheimer were particularly influential. Thalheimer was a member of the artistic management of the house from 2005 to 2008. In the 2008/09 season, Oliver Reese was interim director. Ulrich Khuon took over the management from the 2009/2010 season . 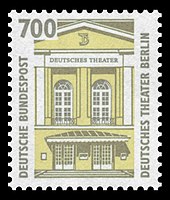 In 2005 the DT was named “ Theater of the Year ”. The Productions Who's Afraid of Virginia Woolf? by Edward Albee (director: Jürgen Gosch), Die Orestie von Aischylos (director: Michael Thalheimer), and in 2008 Die Ratten by Gerhart Hauptmann (director: Michael Thalheimer) and Anton Chekhov's uncle Vanja (director: Jürgen Gosch) became Berliners Theatertreffen , the annual Best of Festival of German-speaking theaters. In 2008 the DT received a total of 6 out of 9 awards: It was “Theater of the Year”, Jürgen Gosch's version of Uncle Wanja is the “Production of the Year” and also shows the Actor of the Year: For her portrayal of Jelena and for her wife John in Die rats chose the jury Constanze Becker for " Actress of the year ". Ulrich Matthes as Wanja and Jens Harzer as Astrow share the title “ Actor of the Year ”. Olaf Altmann's set design for Die Ratten was named “Set Design of the Year”. Niklas Kohrt plays Bruno Mechelke in Die Ratten and is “Young Actor of the Year”. Ensemble members like Nina Hoss , Ulrich Matthes and Niklas Kohrt were honored with actor prizes. International awards went to guest performances such as Emilia Galotti by Gotthold Ephraim Lessing (director: Michael Thalheimer) and Lolita by Vladimir Nabokov (director: Oliver Reese).

The Deutsches Theater houses three stages: The large house with approx. 600 seats in a hall from 1850 with predominantly classical repertoire, the Kammerspiele with approx. 230 seats (furnished in 1906 by Max Reinhardt in a modern design), which are dedicated to contemporary and modern drama and the Box , which was newly opened in 2006 - a compact room in the foyer of the Kammerspiele with eighty seats for close-up theater, new texts and current topics.

In 2010 the Berlin Senate decided to build a new rehearsal stage center at the rear of the building complex. The L-shaped building in the courtyard, designed by the architects Gerkan, Marg and Partner , has three rehearsal stages one above the other, as well as workshops, cloakrooms and offices. Construction of the new building, estimated at around 9.9 million euros , began in summer 2013.

The Deutsches Theater is also successful internationally . With more than 200 guest performances since 2001, tens of thousands of visitors have seen productions such as Emilia Galotti , Faust I , Faust II , Who is Afraid of Virginia Woolf? and The Persians in Europe, South America, USA and Japan. Thanks to the openness and diversity of its program and its commitment to great actors, directors and playwrights, the DT maintains its historical claim to this day.

The building is listed as an architectural monument in the Berlin list of monuments.

The ensemble of the Deutsches Theater included under the directorship of Max Reinhardt a. a. following actors:

Hilpert and von Wangenheim - Third Reich and the post-war period

Directors were u. a.

Authors of the house were u. a. Peter Hacks , Heinar Kipphardt and Armin Stolper .

Well-known actors were u. a.

Theater Kapellmeister and composer was Reiner Bredemeyer ; as musicians u. a. the guitarists Willi Schlinske and Gundula Sonsalla (1944–1999) employed.

Directors are u. a.

As guests were u. a. Ben Becker , Martina Gedeck , Corinna Harfouch and Angela Winkler are involved.

see also: Board in the foyer of the Deutsches Theater