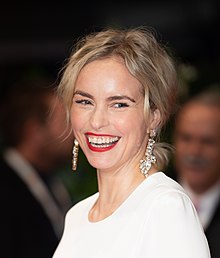 Nina Hoss comes from a left parental home. Her father Willi Hoss was a trade unionist and politician ( member of the German Bundestag , Die Grünen ), her mother Heidemarie Rohweder was an actress at the Stuttgart State Theater and later director of the Württemberg State Theater in Esslingen . Nina Hoss attended the Merz School in Stuttgart. At the age of seven she did radio play roles , at 14 she was on the theater stage for the first time.

In 1995 she began her acting studies at the "Ernst Busch" Academy of Dramatic Arts in Berlin , which she completed in the same year as Lars Eidinger , Fritzi Haberlandt , Devid Striesow and Mark Waschke . Through her film debut in the same year in Joseph Vilsmaier's drama And nobody cries after me , Bernd Eichinger became aware of her. He hired the then acting student in 1996 to play the lead role of Rosemarie Nitribitt in his TV remake of the 1950s hit Das Mädchen Rosemarie . For the part of the Frankfurt precious prostitutes she won a year later at the award ceremony of the Golden Camera the award for Best Young Actress . Thomas Langhoff engaged her in 1998 from the drama school at the Deutsche Theater Berlin . She was seen there as Countess Orsina in Lessing's Emilia Galotti and in Schiller's Don Karlos . In 2006 the German Academy of Performing Arts awarded her the Gertrud Eysoldt Ring for her interpretation of the title role in Euripides ' Medea . She also played with the Berliner Ensemble and in 2005 was the fanatic in the play Jedermann at the Salzburg Festival .

She was awarded the Adolf Grimme Prize for the leading roles in the television films Toter Mann (2002) and Wolfsburg (2003), which established her longstanding collaboration with director Christian Petzold . She was also successful in commercial cinema with Doris Dörrie's comedy Nackt and Hermine Huntgeburth's Africa epic The White Maasai . The title role in the book adaptation The White Massai , the most-visited German film in 2005 with over two million viewers, won her the Bavarian Film Prize for best actress.

In 2006 she played the title character in Christian Petzold's drama Yella, a young woman from a small town in East Germany who, after a failed marriage, looks for happiness in the West. For this, Hoss was honored with the Silver Bear for Best Actress at the Berlin Film Festival in 2007 - she was preferred to the later Oscar winner Marion Cotillard ( La vie en rose ) . Months later, she also received the 2008 German Film Prize for Yella . 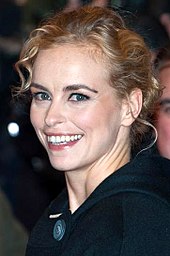 Nina Hoss at the opening of the Berlinale 2012

In 2008 she worked with Christian Petzold for the fourth time on the feature film Jerichow . The drama is about a soldier who has returned from Afghanistan and gets involved in an affair with a married woman. The film, in which Benno Fürmann and Hilmi Sözer can be seen in other roles , was invited to the competition at the 65th Venice Film Festival in 2008 . In the same year she played the role of Anonyma in the film of the same name under the direction of Max Färberböck , whose fate is told as a representative of the numerous women raped in the last days of World War II. In an interview with Galore at the end of 2008, Hoss said that despite their many engagements and successes, the film producers and directors still insist on their casting before a film cast .

In 2011 she was appointed to the competition jury of the 61st Berlin International Film Festival . Again directed by Christian Petzold, she took on the title role in the East German feature film Barbara , which was awarded a prize at the Berlinale a year later . For her portrayal of the pediatrician who plans to flee to the West under constant Stasi threat, Hoss received a nomination for the European Film Prize 2012 . With her next film work, Thomas Arslan's Western Gold , she was again represented in the Berlinale competition in 2013.

After 15 years at the Deutsches Theater, Hoss moved to the Schaubühne am Lehniner Platz in Berlin for the 2013/2014 season , whose director Thomas Ostermeier has known her since their time together at the Ernst-Busch-Hochschule.

In 2014 she recorded the song Europa geht durch mich with the British band Manic Street Preachers . In June 2014 she performed with the band at the Glastonbury Festival . Until 2017 she also played a supporting role as the German BND employee Astrid in the US spy series Homeland .

In 2016, Hoss was appointed to the competition jury of the 73rd Venice International Film Festival . A year later she took on the female lead alongside Stellan Skarsgård in Volker Schlöndorff's English-language feature film Return to Montauk . In 2019 she received an invitation to membership in the Academy of Motion Picture Arts and Sciences , which awards the Oscar .

Hoss lives in Berlin and is in a relationship with the British music producer Alex Silva .

Nina Hoss supports the campaign Your voice against poverty . She is also a Terre des Femmes ambassador and is committed to combating female genital mutilation , she says: “For me, genital mutilation is torture, one of the worst crimes that is done on earth in the name of so-called honor. I dream that it will be possible to give up this form of domination over women. ”In continuation of her father's work, she fights as a special envoy for the state of Pará in Brazil against the destruction of the rainforest and for the improvement of the living conditions of the indigenous people living there .

In 2004 and 2010 Nina Hoss was sent by the Greens to the Federal Assembly to elect the Federal President.