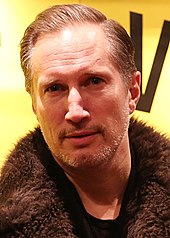 Benno Fürmann at the NRW premiere of Volt , January 2017.

Fürmann lost his mother at the age of seven and his father at fifteen. He had a serious accident while surfing the S-Bahn when he was seventeen, which is why he had to spend six weeks in hospital . He finished his school career with secondary school leaving certificate at the boarding school of the Ernst-Kalkuhl-Gymnasium in Bonn, went to New York City in 1991 and studied acting at the Lee Strasberg Theater and Film Institute . In 2000 he made his breakthrough with anatomy alongside Franka Potente . He made his Hollywood debut with Brian Helgeland's Sin Eater in 2003 alongside Heath Ledger .

Benno Fürmann was an ambassador for the 2006 World AIDS Day campaign, supports the association Junge Helden to educate people about organ donation , is an Amnesty International activist and says: "Everyone who walks through the world with open eyes will find something every kilometer. that should be improved. When I make a film, I'm often cut off from the world for three or four months, I hardly read the newspaper, and I basically live on another planet. I would like to use the phases in between and not just sit around on the couch. ”Since 2009, Fürmann has also supported the development organization ONE .