The title of this article is ambiguous. Further meanings are listed under Die Fledermaus (disambiguation) .

Die Fledermaus is an operetta by Johann Strauss . It was premiered in Vienna in 1874 ( Viennese operetta ) and is considered the highlight of the golden operetta era . 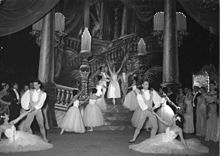 Scene from the Bat (Opera Theater of Pittsburgh, 2006)

Gabriel von Eisenstein has to take a prison sentence for insulting an official. He likes to follow the advice of his friend Dr. Falke to amuse himself with Prince Orlofsky the night before. In reality, Dr. Falke proposed to return the favor of Eisenstein's earlier coup (the operetta was originally supposed to be called “Die Rache einer Fledermaus”, but this was shortened during the rehearsals). Rosalinde von Eisenstein likes to let her husband go when he supposedly goes to prison. She also released the maid Adele, who pretended to visit a sick aunt.

When everyone is gone, Alfred comes to have fun with Rosalinde. Unfortunately, the affair is disturbed by the prison director Frank, who wants to pick up Eisenstein: Out of consideration for Rosalinde, Alfred has no choice but to play her husband and have himself taken to prison.

In the garden salon with the young Prince Orlofsky, Dr. Falcon the prince that he will still have a lot to laugh about today. Eisenstein appears as “Marquis Renard”, Adele is introduced as the young artist Olga. She rejects Eisenstein's suspicion that she is his housemaid. Prison director Frank is introduced to society as "Chevalier Chagrin", and even Rosalinde, disguised as a Hungarian countess, appears - Dr. Falke had her come with the hint that her husband was there. She succeeds in stealing his pocket watch from Eisenstein, who is fascinated by her (who does not recognize her), which she needs in order to later prove his infidelity to her husband (whom she has of course recognized).

Tipsy from the champagne, Eisenstein tells all the guests how he once made Dr. Falke was embarrassed when he exposed him in his bat costume (they were at a masked ball) to the ridicule of market women and street boys.

In the early morning the heavily drunk Frank wants to start his job as prison director. The even more heavily drunk cell closer Frosch is supposed to report what has happened in the meantime, and uses this report for a more or less improvised parody of current local events. This shows that Adele (with her sister Ida) followed Frank. Adele admits who she really is and asks the alleged Chevalier to have her trained for the stage. Now Eisenstein also appears, who wants to begin his sentence and now learns from Frosch that he, Eisenstein, was brought in yesterday. But it turns out that his doppelganger is none other than Alfred ; And when Rosalinde also appears, Eisenstein sees through the relationship between Alfred and his wife, but becomes meek when Rosalinde shows him the watch that she took from him in the form of the "Hungarian Countess" at Orlofsky's party.

Finally the whole party meets with Prince Orlofsky and Dr. Hawk a. Now it becomes clear: The entire production was the successful "Revenge of the Bat" Falke. The lusciously amused prince promises Adele to promote her as a patron .

The male lead, Gabriel von Eisenstein , is opposed to the two equal female lead roles Rosalinde and Adele . The speaking parts and vocal difficulty of the three main roles are roughly equivalent. The role of Eisenstein was written by Strauss for a play tenor , although some important baritones have also recorded the role. The role of Adele is a classic soubrette .

The most important supporting roles are Dr. Falke (aka the bat ), the tenor Alfred , the prison director Frank , the bailiff Frosch and Prince Orlofsky . The latter was created by Johann Strauss as a trouser role for a mezzo-soprano , in some productions the role is also sung by a tenor.

In addition to the vocal soloists, the work is composed of a four-part choir and a symphony orchestra with 2 flutes (2nd with piccolo ), 2 oboes , 2 clarinets , 2 bassoons , 4 horns , 2 trumpets , 3 trombones , timpani , percussion and strings ( violins 1, Violins 2, violas , cellos , double basses ).

Cast of the premiere

The libretto of the operetta goes back to the comedy in four acts Das Prison by the Leipzig writer Roderich Benedix . From this, the comedy Le Réveillon by the French duo of authors Henri Meilhac and Ludovic Halévy emerged . In France, Réveillon refers to the feast on Christmas Eve, which can certainly get out of hand (a similar feast plays a role in the second act of Giacomo Puccini's opera La Bohème ). Karl Haffner edited the motifs and content , although his model turned out to be unsuitable for music. The Vienna-based librettist Richard Genée expanded this template into a compact piece suitable for operettas. In particular, he made a lavish party at a Russian grand prince the focus of the work around which the intrigues of Eisenstein and Falke develop.

The main parts of the music are said to have been composed within 42 days in the summer of 1873 in Strauss' apartment at the time (1870–1878) at Maxingstrasse 18 in Hietzing (13th district of Vienna since 1892), with Strauss mainly appearing as the originator of the melodies stepped while Genée carried out much of the instrumentation. A piece of music from the new work was first presented to the Viennese audience at a charity concert in October 1873, this was the Csárdás from Act II. This and the overture are the only musical parts that were composed entirely by Johann Strauss.

Because of the great success of this Csárdás performance, the world premiere of the entire operetta was pushed ahead quickly, but had to be postponed several times as a result of the economic crisis that had broken out in the meantime (“ Gründerkrach ”). It finally took place on April 5, 1874, under the musical direction of the composer, in the Theater an der Wien . According to later claims, it was not a “sensational success” in Vienna, but in reality it met with approval from the public and the press. By 1888, another 199 performances followed in the same theater. In other cities, however, the recording was considerably better, at the same time it had already been performed over 300 times in Berlin at a later start time.

The first performance in an opera house took place in 1894 under the direction of Gustav Mahler in the Stadt-Theater Hamburg (State Opera) .

Along with the Gypsy Baron and One Night in Venice, Die Fledermaus is one of the three most famous Strauss operettas and also one of the few operettas that are regularly performed at major international opera houses (mostly on New Year's Eve and during Carnival).

The main reason for this is the extremely subtle, rousing and masterfully orchestrated composition. Highlights are the clock duet (Rosalinde / Gabriel von Eisenstein), the csárdás , the aria of Prince Orlofsky, the aria Mein Herr Marquis (Adele) and the choral waltz Little Brother and Sister - You and You in Act Two.

The text is catchy and full of irony with timeless truths. The ensemble "Little Brothers and Sisters" can once again serve as evidence:

"Little brothers / little brothers and sisters / Let this you dare give us / For eternity / Always like today / If we think about it tomorrow."

The overture , which, written in the free sonata main movement form , is one of the greatest works by Johann Strauss , occupies a special position . It sums up the numerous musical highlights of the entire work and, with its varied dynamics, is always a challenge even for top orchestras.

In 1999, as part of the New Johann Strauss Complete Edition, a two-volume new edition of Fledermaus was published with the revised musical text and the post-composed “New Csárdás” as well as the genesis, revision report and libretto.

Independent works were then created based on motifs from this operetta, which are marked in his catalog raisonné with the opus numbers 362 and 363 as well as 365 to 368. These are the following works:

Csarda's works from “Die Fledermaus” and Neuer Csardas for “Die Fledermaus” were also created without an opus number . The ballet music , seldom played in the operetta , also appeared as an independent work.

It is almost completely forgotten that around 1879 there were efforts to persuade Johann Strauss to continue the operetta. Leon Treptow wrote the libretto for this. After Strauss finally refused (he then composed the operetta " The Queen's Lace Scarf"), "Prince Orlofsky" was finally set to music by Carl Alexander Raida and had its world premiere on April 8, 1882 in the Viktoria Theater in Berlin . At best, the “Prinz Orlofsky Waltz” is known from it. After 23 performances, the work was taken off the program and does not seem to have seen another performance.

Film adaptations of the operetta: