Wagner was born in Linz on the Danube. She studied in Linz and Munich . In 1947 she was engaged for the first time at the Vienna State Opera , two years later Wilhelm Furtwängler brought her to the Salzburg Festival , where she took part in the Magic Flute under his direction . Due to the successful collaboration, Furtwängler engaged the young singer for Richard Wagner's Ring des Nibelungen at La Scala in Milan , where she appeared in the role of Floßhilde and Grimgerde .

In 1952 Sieglinde Wagner appeared for the first time at what was then the Städtische Oper in Berlin and introduced herself as Maddalena in Rigoletto . She was seen here for the first time as Carmen on December 17, 1952. The performances of Carl Ebert's production of Mozart's Così fan tutte , in which she appeared on stage as Dorabella alongside Elisabeth Grümmer, are unforgettable .

Sieglinde Wagner has sung an extensive repertoire, such as Clairon in Capriccio , Annina in Der Rosenkavalier , Magdalena in Die Meistersinger von Nürnberg , Fenena in Nabucco , Mutter in Hansel and Gretel and Mary in Der Fliegende Holländer .

In 1963 Sieglinde Wagner was awarded the title of chamber singer by the Berlin Senate . She has participated for many years at the festivals in Bayreuth , Edinburgh , Glyndebourne and Salzburg , under conductors such as Otto Klemperer , Wilhelm Furtwängler , Clemens Krauss , Fritz Busch , Karl Böhm , Herbert von Karajan and Wolfgang Sawallisch . 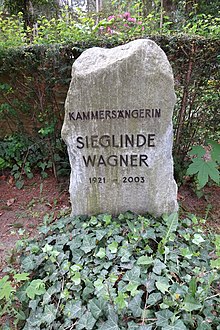 Sieglinde Wagner died in a Berlin hospital on the night of December 31, 2003. She was buried in the Nikolassee cemetery in Berlin.

Sieglinde Wagner was one of the defining personalities of the ensemble of the Städtische Oper and later of the Deutsche Oper Berlin for 34 years until 1986 .