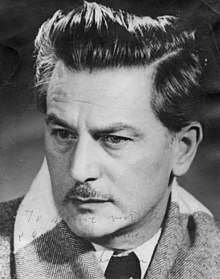 Adolf Wilhelm Anton Wohlbrück (born November 19, 1896 in Vienna , † August 9, 1967 in Garatshausen ) was an Austrian actor who called himself Anton Walbrook in exile in England . 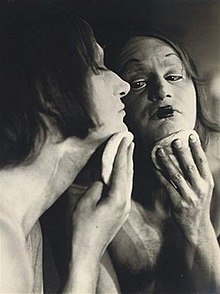 Wohlbrück was the son of the circus clown Adolf Ferdinand Wohlbrück (1864-1930) and grandson of the actor and vaudeville artist Adolf Wohlbrück (1826-1897). After attending a monastery school in Vienna and high school in Berlin, he took acting lessons at Max Reinhardt's school . During the First World War he was captured by the French, where he founded the Aucher Gefangenschaftstheater, and then continued his career at various stages in Munich , Dresden and Berlin. He occasionally began to act in silent films, but it was only with the sound film that he appeared regularly. He embodied the elegant, urbane gentleman , often at the side of Renate Müller , for example in the films Viktor and Viktoria and The English Marriage . From 1933 he changed his appearance and appeared with a mustache .

Wohlbrück, not only a “ half-Jew ” and allegedly homosexual, but also a vehement opponent of the National Socialist regime politically, emigrated to England via France and Hollywood in 1936 and worked there under the stage name Anton Walbrook - “Adolf” would certainly have caused offense at the time. Even in exile he actively supported Jewish actors and “non-Aryan” relatives of German actors, financially or by helping them pave the way to escape.

In contrast to many other German-speaking actors, he was also able to record considerable success in English-speaking exile. One of his first roles in Great Britain was Prince Albert in the 1937 period film Queen Victoria and in the sequel Sixty Glorious Years from 1938. Wohlbrück also played elegant, sinister foreigners; for example as a murderous husband in the film thriller Gaslight (1940) and as a ballet impresario in The Red Shoes (1948) under the direction of the directing duo Powell - Pressburger . He had previously made the films 49th Parallel (1941) and Life and Death of Colonel Blimp (1943) with Powell and Pressburger . In both films, Wohlbrück embodied - unusually in view of the World War and the function of the films as propaganda works - positive Germans who reject National Socialism. In 1947 he took British citizenship .

After the Second World War he was back on German stages. First in 1951 in Düsseldorf under Gustaf Gründgens , then also in Hamburg and Stuttgart. He also worked in international film productions. In Der Reigen , directed by Max Ophüls , he embodied the role of the omniscient emcee . In the late stages of his career he turned back to the theater and made fewer films. In 1967 he received the gold film tape for many years of outstanding work in German film. He died on August 9 of the same year at the age of 70 of complications from a heart attack after collapsing on stage during a performance in Munich at the end of March 1967.

(The following German films in the order of censorship approval)