This article covers the musical instrument. For the play see The Double Bass .

Since the double bass has both the structural characteristics of the violins and the viols , there is disagreement about family affiliation. The F-shaped sound holes ( F-holes ), the number of strings, the scroll at the end of the pegbox and the fretless fingerboard speak for the violin family . The mostly sloping shoulders and the tuning of the strings in quart intervals speak in favor of the viol family. There are double basses with a curved violin back and those with a flat viol back that is bent at the top. Italian models correspond more closely to the violin shape.

The tuning pegs , which are metallic worm gears in the double bass, represent a structural specialty , see tuning mechanism .

The double bass is constructed with different lengths that are tailored to the height of the player. For children and young people there is the eighth, quarter or half bass with lengths of around 80, 90 or 97 cm. For adults, the three-quarter bass with a scale length of 104–106 cm is most widespread today. In the orchestra you will also find the 4/4 bass with a length of 107 (to 110) cm. 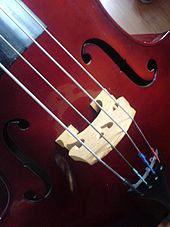 Detail picture of the bridge and the strings

The four strings of today's double bass are mostly tuned in fourths ('E -, A - D - G). Since the instrument lacks four notes up to the Contra-C below the E-string, which are often used in the symphony orchestra, double basses with a fifth string are also used there, which is tuned to Contra-C (in Germany also subcontra-B).

As an alternative to the five-string, instruments with an extension mechanism are also used in the USA and Canada: Using a lever mechanism, the vibrating part of the E-string can be extended into the pegbox in order to generate tones up to Contra-C ("C-machine ").

Especially music from the later Romantic period (Wagner etc.) occasionally requires notes that are below E, which can be produced by the scordature of the fourth string, later also with a five-string or on an instrument with the extension described above. In other music, such as B. Jazz or Pop, the double bass (like the electric bass) does not normally go lower than the 'E' and therefore does not need a five-string. In the USA and Canada, some double bass players also advocate a fifths tuning ('C -' G - D - A), which, however, requires a completely different fingering technique in the left hand, as this is too small to do all of them without changing the hand position Grasping notes (analogous to the cello) (see “left hand” below).

For playing the double bass solo , the solo tuning is often required: With this, each string is tuned a whole tone higher than the orchestral tuning (, E -, A - D - G) (, F sharp, B - E - A), which is one result in a brighter sound. The notation is then usually transposing, so that the notes sound a minor seventh lower than notated.

The string manufacturers offer suitable strings for the different tunings and for the extension mechanism. Most strings are steel strings (steel cables), but gut and plastic strings are also available. The core of the string is wound with a fine metal wire. The material of the wrapping is often chrome steel , but it can also z. B. made of silver-plated copper or silver .

To avoid too many auxiliary lines, double bass parts, as is the case with the double bassoon , for example, are notated an octave above the actual sound. The double bass is thus a transposing instrument . The notation of a c (small c) means C (capital C). It is generally considered superfluous to specifically point out this fact in scores, for example in a preliminary remark or by placing an 8 under the bass clef .

When Michael Praetorius found in Syntagma Musicum both a (1619) Contra Basso da gamba and a contra-bass fiddle . Both instruments have frets . In his experiment (1752), Johann Joachim Quantz also recommends frets for the contraviolon in order to promote the clarity of the tone.

In the time of the Viennese Classic , a five-string double bass with frets was common, with the tuning 'F -' A - D - F sharp - A ("third-fourth tuning" or "Viennese tuning"). Around forty solo concerts and an extensive repertoire of chamber music were written for the double bass tuned in this way (more on this below under “Repertoire”). 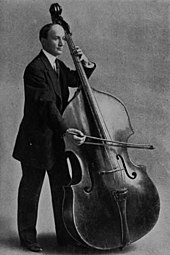 The double bass is played while sitting or standing.

When playing while standing, the double bass is adjusted to the height of the musician by means of a height-adjustable stand ("spike") that is attached to the lower frame and consists of a metal tube. The sting is pulled out so far that the upper saddle is approximately at eye level. The player lets the double bass fall slightly against him. The edge of the top frame and bottom rests against the player's hip, and the left knee touches the lower part of the bottom.

The disadvantage of playing while standing is the necessary compromise between stability and a healthy posture. If both legs are equally loaded and the knees and hips are loosened, as a natural posture requires, the double bass is unstable. There is a risk that the left hand cannot move completely freely, but is also used to hold the instrument . The music can suffer, especially when playing with the bow . On the other hand, attempts to stabilize the double bass by pinching it between the knees lead to an unnatural posture and can result in serious health problems. 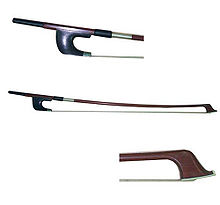 A bow for playing the double bass (German type)

When playing the arco, the strings are bowed with a bow. Different types of lines are used depending on the character of the music . The bow is either called in the upper grip, similar to the cello, or also called "French bow position" (in Italy, France, England, partly USA, partly Switzerland), or in the lower handle, also called "German bow position" (in Austria, Germany, the Czech Republic, partly Switzerland). ( Bow hold )

The arco style of playing is most common in classical music. But jazz double bass players such as Jimmy Blanton , Paul Chambers , Slam Stewart and Renaud Garcia-Fons also use the bow in their solos with virtuosity. 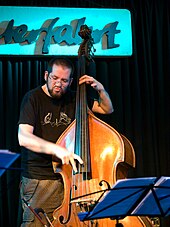 When playing pizzicato , the strings are plucked with your fingers. The pizzicato playing styles in classical and jazz are different. In classical music, the index and middle fingers stand almost vertically on the string, pull them to the side at a 90 ° angle and ideally create a bell-like sound. In jazz the tearing finger is guided almost parallel to the string. Background noises are often desirable. Cultivated as “dead notes” (tearing noises without recognizable pitch) and “drops”, they enliven the rhythmic flow of the bass line.

The slap technique has developed into a special way of playing the double bass since the 1910s. The strings are torn with the closed fingers in order to make them bounce back onto the fingerboard. In traditional jazz, the double bass player can achieve a higher volume, and the actually rather dull and round sound gets a percussive element. Since the change from two-beat to four-beat (walking bass) accompaniment, the slap technique no longer plays a role in jazz. However, it was further developed in the field of rock'n'roll, rockabilly and psychobilly and is widespread there.

The position of the fingers of the left hand determines the pitch of the bowed or plucked strings.

A predefined hand position is characteristic of these two traditional systems, with which a high level of stability of the tone is achieved. The whole tone tension is constantly maintained, which results in frequent position changes and thus technical disadvantages compared to other string instruments.

In order to get by with fewer changes in position, the four-finger technique was developed, which is similar to that used on the violoncello. All fingers grip the string at semitone intervals. In contrast to the hand tension in the Simandl technique, the hand is open and the fingers reach the target point by moving. This technique is older than the Prague School and is rarely played and taught (in Germany: HMT Rostock and UdK Berlin, in the Netherlands: Conservatories Rotterdam and Arnhem, in Canada: Royal Conservatory Toronto, in the USA: American School of Double Bass as well at several universities). The reasons for this lie in the higher technical requirements that a fluid mobility of the hand brings with it. Opponents of the technique cite the higher risk of uncleanliness, especially in faster passages and inconsistent fingerings in the double bass groups of the orchestras when using both playing systems at the same time. In addition, due to the widely spaced semitones, a range is required that many double bass players cannot safely grasp with the little finger. This can make the sound unstable. The four-finger technique is used by Joel Quarrington, Rodion Azarkhin, Michael Barry Wolf , Guy Tuneh , Hans Roelofsen, Silvio Dalla Torre and, in the field of jazz, by Niels-Henning Ørsted Pedersen .

As with the violoncello, the thumb attachment is used for playing in higher registers.

With vibrato , the left hand is moved slightly up and down, but slower than with the violin, depending on the lower pitch of the double bass, in order to liven up the tone through controlled pitch fluctuations and timbre changes and thus give the music more depth of expression.

Areas of responsibility and repertoire

In the classical string orchestra, first and second violins (soprano and alto), violas (tenor) and cellos (bass) form a four-part set , the lower part of which is doubled by the double basses in the octave to round off the overall sound - this doubling of the octave makes a significant contribution to the orchestral sound. Usually cellos and double basses are notated together in a single system; It was not until the late Classical and Romantic periods that a separation between cellos and double basses in separate staves became more common.

There are also a number of solo concerts for double bass and orchestra. Such double bass concerts were composed by Carl Ditters von Dittersdorf , Johann Baptist Vanhal and Franz Anton Hoffmeister , among others . Also Joseph Haydn wrote a bass concert, which is not obtained. Double bass virtuosos have composed other concerts for their instrument, including Johann Matthias Sperger , Domenico Dragonetti , Giovanni Bottesini and Sergei Alexandrowitsch Kussewizki .

Most composers of that time preferred the cello to the double bass as a solo instrument, because a cello is much more agile and manoeuvrable and, with its sound richer in overtones, is better suited for solos; In addition, there is a higher degree of intonation security, as fewer changes of position are necessary.

Another exception is jazz, where plucked, solo-like interludes are not uncommon.

The composer Bertold Hummel wrote a Sinfonia piccola op. 66 for eight double basses. There are quartets for four double basses by Hartmut Schmidt , Claus Kühnl and Colin Brumby, among others .

In the 19th century, there was also an attempt in French orchestras with an enlarged design of the double bass (about 3.5 meters high): the three-string octobass , which, however, was only supposed to expand the range by a major third down to the counter C. Tuning Contra C, Contra G, and capital C. The inventor J.-B. Vuillaume is not primarily concerned with expanding the tonal range, but rather with increasing the tonal volume. Hector Berlioz praised the sound of this instrument and recommended its use in the orchestra. The strings were not pressed down with the fingers, but with levers and pedals. Vuillaume built three instruments of this type.

A modern variant is the electric double bass (Electric Upright Bass), which has no or only a greatly reduced body. The vibrations of the steel strings are picked up by a pickup , electrically amplified and reproduced by a loudspeaker .

The Berda is a double bass-like instrument in South Slavic and Hungarian folk music.

Instrument of the year