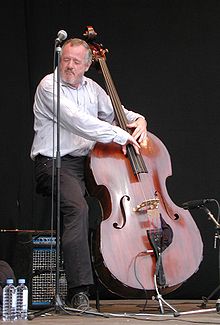 Niels-Henning Ørsted Pedersen (NHØP) (* 27. May 1946 in Osted , Denmark ; † 19th April 2005 in Ishøj , Denmark) was a Danish jazz - double bass player . His virtuosity was due, among other things, to his special playing technique, the "four-finger technique", with which he was way ahead of his time. Because of his long name, he liked to use the abbreviation “NHØP” himself. His colleagues sometimes referred to him as “the great dane with the never-ending name” (the great Dane with the endless name; however, “great dane” also means the Great Dane in English ).

Niels-Henning Ørsted Pedersen was the son of a teacher at a community college . After Ørsted Pedersen had learned the piano for six years , he switched to the double bass. Since the age of 14 he played with leading Danish jazz musicians.

Count Basie offered the 16-year-old to play in his orchestra. However, he decided to join the Copenhagen jazz club " Jazzhus Montmartre " and was a member of the Danish radio orchestra . In the future, too, he turned down all offers of permanent work in the United States.

In the 1960s he was a sought-after musician on tours, especially among American jazz musicians such as Sonny Rollins , Bill Evans , Dexter Gordon , Joe Pass , Ben Webster and Bud Powell . In the 1970s, Niels-Henning Ørsted Pedersen began a continuous collaboration with the pianist Oscar Peterson . The bassist Ray Brown recommended him with the words: "He's the only one I know who might be able to keep up with you." It was also at this time that he started a career as a soloist and band leader .

Since the 1980s Ørsted Pedersen worked closely with the pianist Kenny Drew , with whom he enjoyed great success, especially in Japan, until his death in 1993 . In 1991 he and his childhood friend and longtime conductor of Denmark's Radio Big Band, Ole Kock Hansen , published a number of jazz variations of Danish folk songs, which were enthusiastically received in Denmark. He then founded the NHØP Trio together with the Swedish guitarist Ulf Wakenius and changing guest musicians , with which he has toured numerous times and produced recordings on sound carriers. Ørsted Pedersen has taught at the Rytmisk Music Conservatory in Copenhagen.

Two months before his death he gave his last recorded concert in Vienna. There were Árni Egilsson and Wayne Darling on double bass as well as pianist Fritz Pauer and drummer John Hollenbeck . He died of heart failure on April 19, 2005 in his home in Ishøj near Copenhagen, leaving behind his wife Solveig and three children. 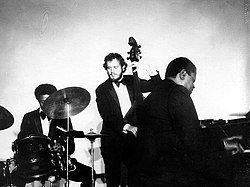 Niels-Henning Ørsted Pedersen has published or contributed to the following LPs and CDs:

Niels Henning Ørsted Pedersen received the “Best Bassist of the Year” award from the international jazz magazine Down Beat three times and the 1991 music award from Nordisk Råd .