A book burning is the demonstrative destruction of books or other writings by fire. It is the best known form of book destruction . Most of the publicly carried out burnings are carried out because of moral , political or religious objections to the content of the writing and occurred both as a state staged or tolerated measure and as a means of public protest against state violence. Unpopular books were u. a. as blasphemous , heretical , heretical , immoral , obscene , seditious and treasonable both symbolically and actually burned.

The book burnings of the Roman Catholic Church , which took place since the 4th century and reached their climax in the Inquisition , are well known. In the 20th century, it was the book burnings of 1933 in National Socialist Germany , in which tens of thousands of books were publicly burned in ritualized demonstrations as part of an action against the un-German spirit of the German student body .

Book burnings are a phenomenon that accompanies the development of mankind and runs through the entire tangible history. The first burns are already known from antiquity, but they mainly shaped the 17th and 18th centuries.

Even the emperor Diocletian had the writings of the Christians burned in Constantinople . (See Martyrs of the Holy Books and Diocletian Persecution of Christians .) In the Middle Ages, autodafé referred to the burning of heretical books as the execution of a judgment by the Inquisition . In modern times, French revolutionaries and British troops in North America used this extreme means of their politics and burned down parts of the Bibliothèque Nationale and the Library of Congress. The reasons remained the same for centuries: the statements in the books are politically intolerable, false, dangerous, defamatory, obscene or pernicious. Attempts to ban unwanted books often culminated in public book burnings that were staged to attract the public. The ceremony adapted to the respective customs. While church bells were still ringing until the end of the 18th century and an executioner carried out the sentence by throwing the book on a stake, today people usually proceed more quietly and - due to the negative power of association with the book burning in 1933 - often evade attention the media. 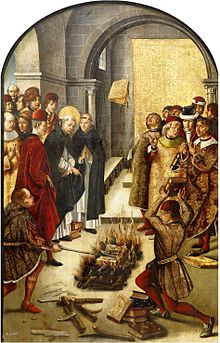 Saint Dominic and the Albigensians in Albi (1207) - Catholic and Cathar scriptures are thrown into the fire, but only these burn - Pedro Berruguete around 1495. 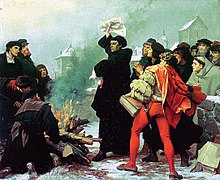 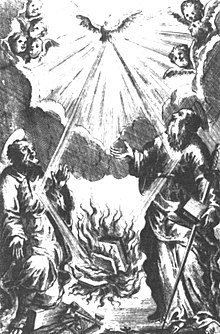 Title page of the index Librorum Prohibitorum , copper engraving from 1711. (NB: The Holy Spirit above, in the middle of aureole and watching angels, lit with 2 rays that are deflected by Christians, with a halo , the pile of books below.) 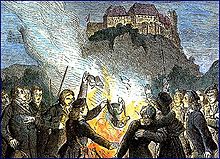 Book burning on October 18, 1817 at the Wartburg Festival 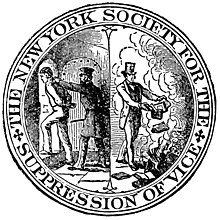 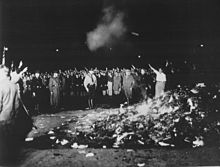 May 10, 1933, book burning by the German student body on Opernplatz in Berlin. 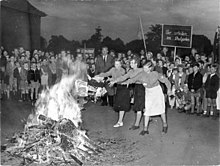 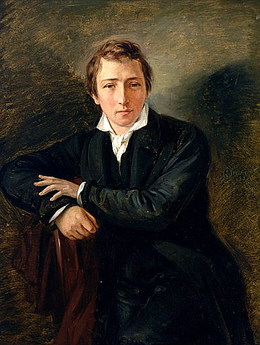 "That was just a prelude, where you burn books, you end up burning people."

This quote from Heinrich Heine from his tragedy Almansor (1821, published 1823) does not deal - contrary to a widespread assumption - the book burnings carried out four years earlier at the Wartburg Festival in 1817 , but a burning of the Koran after the conquest of Spanish Granada by Christian knights under the inquisitorial Cardinal Francisco Jiménez de Cisneros 1499/1500 (see above). In Heine's tolerance piece , the Muslim Almansor ben Abdullah speaks to Hassan, who is desperately fighting against the Christian occupation:

Almansor:
We heard that the terrible Ximenes,
In the middle of the market, in Granada -
My tongue stares in my mouth - the Koran
Threw flame into a pyre!
Hassan:
That was just a prelude to where you got books
If you burn, you burn people in the end.

Heine's quote is seen as prophetic for the book burning in May and June 1933 in National Socialist Germany and can be read on many memorials and memorials (see also book burning in Germany in 1933 ). In Frankfurt there is a commemorative plaque in front of the Römer and a painting in the Imperial Cathedral.

Book burning in literature and in film 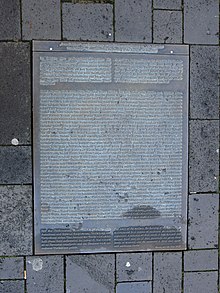 "Reading mark" in memory of the book burning on May 10, 1933, Bonn market square .
The memorial to the book burning on the Bonn market; A total of 60 visible book spines, so-called "bookmarks", are distributed in the pavement of the Bonner Markt, which condense on the town hall stairs, the place where the books were burned on May 10, 1933. In addition, a weatherproof archive container in the form of a book chest was let into the square. Its inscription names the event and other authors of burned books.

"A book is a loaded gun in the house next door. Burn it. Take the shot from the weapon. Breach men's mind. Who knows who might be the target of the well-read man. Me? " (Fahrenheit 451)

Such censorship does not have to come from corporations, for example, under the leadership of US President Donald Trump , information on climate change and environmental protection has been deleted from the website of the White House and the National Environmental Protection Agency (EPA) by the United States government . In response to incidents of this kind, scientists have been organizing “data rescue events” since December 2016. At these events, as much public data as possible should be copied and stored in a secure archive: You started the datarefuge.org project (German: “Datenzuflucht”).

The negative role model is the former, “ climate - skeptical ” and fossil-energy- friendly Canadian Prime Minister Stephen Harper , under whom important data sets and entire databases of printed matter are said to have disappeared: “In Canada, entire scientific libraries of the Ministry of Fisheries and Oceans were simply dumped . ” Datarefuge is thus understood as a precaution against a“ digital book burning ”.