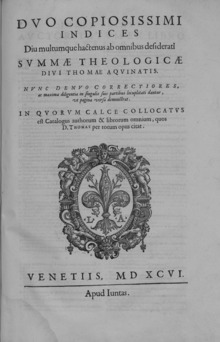 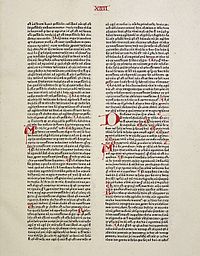 Page from a medieval manuscript of the "Summa Theologica"

Summa theologica or Summa theologiae (German theological "sum" or main content of theology ) refers to one of the main works by Thomas Aquinas from the period from 1265 (or 1266 ) to 1273 .

Thomas also gathered some controversial proofs of God in this summa . He took over the doctrine of being ( ontology ) from Aristotle and developed it further.

Character of the work

The main work of Thomas is regarded by many as the most outstanding philosophical-theological work of all. The work is divided into three parts; the third part remained unfinished and was supplemented by students of Thomas with a "supplement" - mainly taken from Thomas' commentary on sentences .

The three parts are divided into quests , these into articles. The articles are introduced by objections; This is usually followed by a counter-argument ( sed contra ), in the core of the article ( corpus articuli ) the analysis or teaching decision is made, this is followed by the statement on the objections. Among other things, the philosophical-theological doctrine of God, morality and virtue as well as Christology and sacraments are dealt with . As sources Thomas used the Holy Scriptures , church fathers and theologians , who were considered to be authorities, liturgical texts and philosophers , among them especially Aristotle . In addition, Thomas sometimes called " quidam ", which were difficult to determine , whose teachings were circulating in the 13th century , as well as councils , ecclesiastical orders and canonical sources. In the prologue, Thomas explicitly states that he is addressing beginners ( incipientes, novicii ); this explains the pedagogical-systematic structure.

The first quaestio of Part 1 shows theology to be a science , explains its method and its primacy over other sciences. The main topic of the first part is the philosophical-theological doctrine of God, the being and essence of God and the Trinity . God is being itself, which is founded in itself. Everything else is not its own being, but has being through participation. Therefore God is the first target cause, archetypal and effective cause of all being and that through his will; the “ materia prima ” was created by God out of nothing . Whether God created the world from eternity or it has a temporal beginning can not be decided by reason - what is meant is speculative philosophy (a question that was controversial at the time), only doctrine of faith (we would add today: and the results of modern Science) says that the latter is the case (I, 46, 2).

When asked about the origin of the bad , Thomas makes a distinction that has become classic: the bad, which consists in a lack of activity or is caused by a lack of what is active, cannot be traced back to God. The evil that is the destruction of some things is caused by God, for the order of the universe requires that there be things that can and sometimes fail. The order of the world also includes the order of justice , which requires that sinners be punished. In so far as punishment is bad for the punished, God is the author of bad; but he is not the author of the bad, which is guilt or evil.

According to the doctrine of angels and demons , the creation of material beings is treated; the structure of this part follows on from the Genesis report on the six-day work.

With the Quaestio 75 the doctrine of the creation of man begins. First, the nature of the human soul and its powers are examined. The human spirit-soul is viewed in the Aristotelian sense as the form principle of the body. Quaestiones 84–88 on spiritual knowledge are particularly important. Thomas fixes the woman on her role as mother, "since the man finds better help in every other work in the other man than in the woman" (I, 92, 1). He regards a certain inequality among people as necessary, and this inequality is part of the beauty of the God-made order (I, 96, 3).

The following discussions concern the management of the world, the influence of angels and demons on the world, then the influence of the heavenly bodies on earthly events. Since this is the work of the two causes, the order of which is called fate , Thomas goes into this in four articles. The last quaestiones of the 1st part are dedicated to human activity and reproduction.

In the 2nd part the moral teaching is presented. The main theme is the ultimate goal of human life and that by means of which man can get to that goal or miss it. Every action and event takes place for the sake of a goal. Beings gifted with reason like humans guide themselves to the goal, as it were, because they have control over their actions through their freedom of choice; Unreasonable creatures aim at a natural order. The ultimate goal of all people is happiness ( beatitudo ), the content of which is of course often unclear. Perfect bliss consists in the vision of the divine being and cannot be attained in this life. Because man achieves this goal through actions, these are examined. This investigation is carried out first in general, then in particular, with which Thomas turns to the doctrine of virtues. Virtue ( virtus ) is "a good quality - in terms of habit - of the mind, is lived correctly because of that no one used badly effects the God in us without our help." Regarding the latter, it is stated that this is an infused virtue ( virtus infusa ) that is caused by God without our activity, but not without our consent. All areas of the doctrine of virtues are considered by Thomas: the dianoetic ( virtutes intellectuales ), the theological ( faith , hope , love ), the moral virtues and sins; Law in general and in particular, divine grace and justification.

For Thomas, a law is a command of reason given by a superior, by means of which the subordinates are directed. It aims at a good and is supposed to make the subordinates good (I-II, 92, 1). Summa theologiae I-II, 90-97 contains the following hierarchically structured teaching on the law, whereby God communicates an all-encompassing order to the entire cosmos: God is the supreme lawgiver, on which ultimately all order in the world is based. The eternal law ( lex aeterna ) is the order of the entire cosmos proceeding from the divine reason. It must not be confused with the divine law ( lex divina ), namely the law recorded as a divine statute by revelation in the Bible. The natural law or natural law ( lex naturalis ) means the participation of rational creatures in the eternal law. Man cannot fully understand the eternal law. The legislature of a political community is not completely free to determine the laws. The human law ( lex humana ) must be related to the commons. It can be deduced from natural law in two ways. In the case of the law of the peoples ( ius gentium ) this takes place in a similar way to a scientific conclusion, in the case of civil law ( ius civilis ) in a less strict way in the sense of a more detailed definition of the natural law. A law that deviates from the natural law is not a law in the strict sense, "but a destruction of the law" ( legis corruptio ) (I-II, 95, 2). Likewise, a law passed by a tyrant is not a law either (I-II, 95, 4). The divine law, d. H. the divine revelation in space and time is divided into the old law (I-II, 98-105) and the new law or the law of the gospel (I-II, 106ff.). In the Mosaic Law of the Old Testament , Thomas differentiates between moral commandments (I-II, 100), cult regulations (101-103) and legal statutes (104-105). He assigns all moral precepts, especially the Ten Commandments , to the law of nature, but he explains that human reason can only come to a part of these precepts. The gospel is called a law of freedom ( lex libertatis ) (I-II, 108, 1).

While the investigations in the first half of the second part are mostly of a general nature, in the second half they have a special character. Thomas comments on the much discussed question of the priority of the vita activa or the vita contemplativa in the following way: The “vita contemplativa” is generally better than the “vita activa”; Due to special circumstances, however, the “vita activa” is often preferred.

The unfinished 3rd part deals with Christology and the sacraments ( Baptism , Confirmation , Eucharist , Penance ). The supplement complements the explanations on penance and adds the treatises on the final unction ( extrema unctio ), ordination and marriage . The monogamous marriage is discovered through reason: The animal kingdom shows that simple fornication ( fornicatio simplex ) leads to quarrels among males. Man creates an order by means of his reason, which removes the cause of the dispute.

It concludes with discussions about the fate of souls after death , about the end of the world , resurrection , judgment , eternal bliss and damnation .

The Summa theologica is a theological work and is based in structure and content on the revelation of God, which is analyzed, presented and examined for its consequences. However, philosophical insights are very often used to explain and defend theological teachings. If you remove these sections from their theological context, you have complete short philosophical treatises, especially in the areas of metaphysics , anthropology, and moral philosophy . In this respect, the work is of great philosophical importance. However, it is controversial in which way such a detachment of individual parts from the overall theological context is appropriate. For example, the question arises as to whether the “legal act” (I-II, 90ff.) Can be viewed separately or whether the juxtaposition of law and grace is indispensable. About this and the following parts of the second part, Pesch takes the position that it is not about the answer to questions “What should I do?”, But about requirements and modalities “how the encounter with God takes place in knowledge and love” Thomas here too is "a dogmatic treatise", he is practicing " systematic theology."

The language of the work is artless, but very clear. Theology is consistently penetrated with the terminology inherited from Aristotle. For example, Thomas is the first scholastic to consider the human soul as the form principle (forma) of the body.