Memorial plaque at the cemetery in Egg an der Günz

The son of the village official Michael Maier came from a simple background and grew up with his uncle, the pastor Martin Mayer, in Rottenburg am Neckar . From the age of twelve he studied theology , philosophy , philology as well as law and natural sciences at the universities of Heidelberg , Tübingen and Cologne . In Tübingen he heard lectures from Wendelin Steinbach , a student of Gabriel Biel . In Freiburg im Breisgau he frequented the humanist circles around Ulrich Zasius . On December 13, 1508 he received in Strasbourg the priesthood .

After receiving his doctorate from the University of Freiburg , he became professor of theology at the emerging University of Ingolstadt in 1510 , which through him and other outstanding theologians such as Franz Burckhardt, Leonhard Marstaller and Petrus Canisius became the intellectual center of the Counter-Reformation . He was also canon in Eichstätt and pastor of the Ingolstadt parishes of St. Moritz and Liebfrauenmünster .

Corner to the ban on interest

Eck was considered an outstanding rhetorician and had an education that was unusual for the circumstances of his time. After Jakob Fugger had sought legal advice first and foremost, he got in touch with Eck. Fugger had previously commissioned Konrad Peutinger to answer the question of interest and usury . The lawyer Konrad Peutinger appeared as a defender of the Augsburg merchants. In addition, Peutinger made contact with Johannes Eck and asked him to prepare an expert opinion on the deposit agreement in which he opposed the traditional interest ban of the Roman Catholic Church and made him stand up for an interest rate of 5%. He is thus drawn into the economic tensions and dynamics of early capitalism . The background that Eck had studied with the interest-friendly Tübingen professor Konrad Summenhart is significant .

On July 12, 1515, he caused a sensation during a disputation on the question of the prohibition of interest , the Upper German interest dispute , at the then world-famous University of Bologna . On the central question of interest-bearing, he, who had contacts with the Fugger bank in Augsburg , advocated an interest rate of five percent in line with what was then a modern position. This courage to defend what had long since established itself and proven itself in practice made Eck appear in the eyes of his critics as a Fuggerknecht , opportunist and stooge of big business. So in 1515 he carried out this dispute at the University of Bologna with theologians and lawyers. He argued that interest and loss deposits were not of concern, unlike fixed income investments. Eck did the preliminary work with his “Tractatus de contractu quinque de centum” (1514), in which he listed three hundred arguments. Through his commitment, Eck secured Jakob Fugger's patronage. Eck had diverse interests, so he was planning a publication on the indigenous population of the west Indian islands . In 1518 he translated a work on the Iranian Sarmatians , which he dedicated to Jakob Fugger.

Bust of Eck in the Ruhmeshalle , Munich 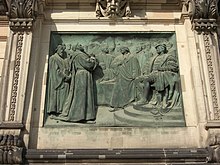 Hieronymus Schurff, Martin Luther and Johannes Eck at the Reichstag in Worms; Relief on the Berlin Cathedral

At first, Eck was benevolent towards Luther's concerns. After the publication of the 95 theses , however, he wrote in response handwritten “Adnotationes” (comments on 18 Luther's theses) intended only for Eichstatt Prince-Bishop Gabriel von Eyb , which came to Luther through Eichstatt's indiscretion and soon became obelisci (= little skewers, how to used to list suspicious passages in manuscripts and books). Luther, in turn, responded with the Asterisci (= asterisk to identify notes). When the differences in attitudes towards indulgences , freedom of will , justification and papacy became more and more obvious, the Leipzig disputation took place in 1519 , in which Eck competed against Martin Luther and Andreas Bodenstein (known as Karlstadt) . He defended the “old church” positions and, through clever tactics, was able to persuade the hot spur Luther to say that some of the theses of Jan Hus , who was sentenced to death by the Council of Constance and burned as a heretic , were “truly evangelical”. In the same year Eck published his work De primatu Petri , in which he consistently and convincingly defended the papacy against Lutheran criticism.

In 1520 Eck traveled to Rome to get the Pope to continue the trial against Luther. On June 15, 1520, Leo X issued the Bull Exsurge Domine , which condemned 41 sentences of Luther as heretical, ordered the burning of his writings and threatened him with the ban if he was not revoked within 60 days. Back in Germany, Eck published the papal bull threatening excommunication against Luther. He also fought in the disputation in Baden (Switzerland) (1526), ​​in which Eck won a victory over Johannes Oekolampad and Berchtold Haller , at the Reichstag in Augsburg (1530) and in the disputations in Worms (1541) and Regensburg (1541) he polemically against the teaching of the Reformation . During this time, Eck became the target of Protestant propaganda and stylized as the enemy of the Reformation. Luther called him "Doctor Sau" and "the pig from Ingolstadt" or shortened the title "Doctor Eck" to "dirt".

Satirical depiction of Martin Luther's opponent. Woodcut of a leaflet at the time of the Roman Trial, mocking it with animal masks: on the far left the Franciscan Thomas Murner as a tomcat, next to him the theologian Hieronymus Emser as a goat. Pope Leo X. as the antichrist is designated as the lion in the center of the picture , on the right Johannes Eck as a pig and the Tübingen theology professor Jakob Lemp as a dog. The caption shows that Leo X. Eck promised a cardinal's hat and money, in return Eck should force Luther down.

Inner-Catholic reforms and the corner Bible

Eck's standard work Enchiridion locorum communium adversus Lutherum appeared in 1525 , in which he justified his rejection of Protestantism . The book reached 46 editions. Eck called for church reforms, such as an improvement in the training of priests and the abolition of benefices and the abuse of indulgences . These demands were taken up after his death at the Council of Trento and largely implemented. He published a five volume sermon book to improve the quality of homilies in the Catholic Church. However, he firmly rejected the reformers' approach because, in his opinion, it was a distorting interference with the spiritual and theological tradition of Christianity.

The Eck Bible , a translation of the Bible by Johannes Eck from 1537, which theologically directly opposed Luther and is therefore one of the Catholic Corrective Bibles , is also of particular importance . It is also interesting from a linguistic point of view because it is not written in East Central German Saxon like the Luther Bible , but in a more Bavarian Upper German . It was widespread in the Catholic, Upper German-speaking south until the 17th century and was printed in a total of seven editions, mostly in Ingolstadt, but also in Cologne.

In addition to his work as a professor, Johannes Eck was also a pastor in Ingolstadt, first at St. Moritz (1519–1525) and then at the parish, ducal and university church, today's cathedral "Zur Schönen Unserer Lieben Frau" (1525–1532 and 1538-1540). To this end, he created a parish register for himself and his successors in 1525 with all the information relevant to practice, thus creating a rich source for worship and everyday parish life in a Catholic community during the Reformation. Eck describes the entire church year in detail with the local characteristics and precisely describes the tasks of the three cooperators and 15 chaplains . Ä. Described. This parish book is now available with comments, edits and translations and shows a page of Eck's that has so far been neglected: He attached importance to a solemn and at the same time popular liturgy, the vernacular songs, numerous processions and the scenic forms valued by the people (e.g. at the Holy Sepulcher; Ascension Day on Ascension Day ).

Eck showed particular zeal as a preacher, as documented by his preserved handwritten sermon sketches. He saw his main task as a pastor in the proclamation of the word of God. He had delegated the practical pastoral care (baptisms, funerals, etc.) to his three cooperators. Eck is also buried in the Ingolstadt Minster near the Sacrament Chapel.

In 1541 his work was published with the title Ains Juden büechlin Laying in ain Christ of all Christianity to shame because it may happen to the Jews injustice in accusing Christians of murdering children. Here you can also find vil histori, what bad and bad the Jews have donated in all Teütschen land and other rich in art. In it, Eck described it as a “shame for the whole of Christianity” that a Christian - meaning the evangelical theologian Andreas Osiander - had defended the Jews against the accusation of ritual murder of Christian children. Eck summarized all the accusations of anti-Judaism of his time, in addition to ritual murder, usury , the host sacrilege and alleged poison attacks, and added more: He declared that the Jews were behind the split in the church and indicated that they would strive for world domination . According to the Berlin historian Wolfgang Benz , Eck was thus the "ancestor of the slogan of the» Jewish world conspiracy «." Eck demanded that Jews wear a symbol that could be used to distinguish them from Christians; that Jews should never testify as witnesses against Christians; that Jews would be prohibited from practicing any trade; and that Jews should be compelled to hear Christian sermons. His writing was received well into the 20th century. During the Nazi era, Julius Streicher used it to ammunition a special edition of his Striker on the subject of ritual murder.

Works on the Internet

A digital edition of Johannes Eck's correspondence, edited by Vinzenz Pfnür , is no longer online.