The General Atomics MQ-1 Predator (dt. Predator ) is a remote controlled unmanned aerial vehicle (UAV), also known as drone denotes the 1995-2018 of the Air Force US was used. Its original name was RQ-1 Predator . It was the most important part of the tactical air reconnaissance of the United States Armed Forces until 2018 .

The development of the Predator goes back to a secret program by DARPA to develop a family of small, multi-purpose, high-performance UAVs in the 1980s. To this end, a contract worth US $ 200 million was signed with the small company Leading Systems Inc. (LSI) to develop the Amber . LSI was founded in 1983 by the aeronautical engineer Abraham Karem, an Iraqi who immigrated to the USA in the mid-1970s and who had already worked as a designer for the Israeli armed forces.

When LSI had to file for bankruptcy in 1990 and the further development of the Amber had to give up, the production facilities were taken over by General Atomics . In 1993, the Aeronautical Systems Inc. department was founded there and the focus was then on a scaled-down export version of the Amber, which had less complex avionics and simpler reconnaissance systems. This machine, known as the Gnat 750 , flew for the first time at LSI in mid-1989 and represents the forerunner of the Predator. The program, which lasted until June 1996, was called the Advanced Concept Technology Demonstration (ACTD). This brought out the first RQ-1A Predator in spring 1995.

The Predator can scout an area for around 24 hours with television cameras for daylight as well as thermal imaging cameras for bad weather and night vision and a synthetic aperture radar . The control takes place via a ground station, which is connected to the drone by means of a 6.25-meter K u -band satellite connection and C-band radio . The standard team for a 24-hour operation of the system consists of 55 people, whereby only one pilot and two sensor operators are required for the actual operation.

Shot down RQ-1 Predator in the “Aeronautical Museum” in Belgrade

During the ACTD program, the CIA pushed for the drone to be tested in the Balkans . The RQ-1A was first used in the summer of 1995. The drone quickly proved to be a success.

The 11th Reconnaissance Squadron of the USAF was on 29 July 1995 at the Nellis Air Force Base reactivated; it became the first USAF squadron to fly drones.

After the terrorist attacks of September 11, 2001 , the RQ-1 Predator was used on a massive scale in the war on terror . The mission in Afghanistan made enormous difficulties. Of the approximately 60 RQ-1 drones deployed, 20 were lost, and presumably none of them fell victim to enemy fire. Most of the machines in the Afghan highlands suffered system failures due to icing. The unexpectedly high loss rate led to massive criticism within the United States Department of Defense , as errors in operational planning were found. As a result, various upgrades in the area of avionics were implemented and a de-icing system was installed in later versions. Based on experiences in Afghanistan, the RQ-1 was developed into the MQ-1. The previous range of operations - tactical air reconnaissance, air surveillance and target acquisition - was expanded to include close air support . Like the RQ-1, the MQ-1 was also taken over into the services of the CIA for combating terrorism .

A total of hundreds of uses of the Predator for the purpose of targeted killing of people were known. For example, during the war in Afghanistan on February 7, 2002, a car convoy suspected of being Osama bin Laden was shot at. However, he was not among those killed. On November 3, 2002, a car was shot at in Yemen , killing six suspected al-Qaeda members, including Ali Qaed Sinan al-Harthi , who was believed to be the mastermind behind the attack on the USS Cole (DDG 67) . When inserts the Predator in Pakistan since 2004, a total of several thousand people were killed or injured, including several hundred civilians and innocent bystanders. On December 3, 2005, an al-Qaeda safehouse (hiding place disguised as a private house) in Pakistan was shot at with the help of the MQ-1 . In the attack were Abu Hamza Rabia , was killed allegedly "number 3" of al-Qaida, and four other men. At the end of January 2008, his successor Abu Laith al-Libi and several other men were also said to have been killed in a Predator attack. On August 5, 2009, Baitullah Mehsud , founder of Tehrik-i-Taliban Pakistan , was killed by a Hellfire missile fired from a Predator drone.

On December 23, 2002, an RQ-1 armed with two FIM-92 Stingers entered Iraqi airspace. After a lock-on on a mounted Iraqi interceptor, a MiG-25PD Foxbat , it fired a guided missile at the drone. The drone operator tried unsuccessfully to repel it with a stinger; the guided missile destroyed the drone. In December 2009 it became known that not all image transmissions from the drones were bug-proof and some were intercepted by third parties, for example with the computer program SkyGrabber . In March 2015, the US armed forces lost a Predator drone for the first time since their air strikes on targets of the terrorist organization "Islamic State" (IS) began.

The Predator is a thrust propeller aircraft ( pusher ). The propeller is located at the rear end of the fuselage, behind the three tail units. The V-tail at the stern points downwards to protect the propeller. Between the V-tail fins there is a third stabilization surface pointing vertically downwards. The wings have - like a glider - a high aspect ratio , since the Predator is optimized for a relatively low flight speed. The Predator has a retractable three-legged landing gear .

Sensor technology and telecommunications are - unaffected by the drive - in the bow area. The sensor system is directed forwards / downwards, the telecommunication via parabolic antenna upwards. The antenna is under a radome .

The variant designations of the RQ-1 differ significantly from the procedures specified in the designation system for aircraft of the US armed forces . RQ-1A stands for the entire Predator system, which typically includes four UAVs. These were either Rotax-912UL-powered RQ-1K or the improved RQ-1L with Rotax-914 engines. In addition, there was the ground station called RQ-1P GCS (Ground Control Station) and the satellite connection part TSQ-190 (V). The RQ-1B system uses the MQ / RQ-1L UAVs, the RQ-1Q ground station, and the PPSL (Predator Primary Satellite Link) satellite link. The RQ-1B configuration is said to be more reliable and also has two Ku-band connections for simultaneous control of two RQ-1L.

The RQ-1 was used by the 11th, 15th and 17th Reconnaissance Squadrons of the US Air Force . The most important base was the Indian Springs Air Field, which was renamed Creech AFB in 2005 . Because of the relatively weak motorization, this drone, which is the approximate size of a Cessna 172 , needed a 1.5 km runway to take off and land .

Especially when searching for Osama bin Laden in Afghanistan, the US military faced the problem that hours often passed between target recognition and the requested air strike. It was therefore an obvious choice to carry out the air strike with the drone itself. The MQ-1 Predator emerged from this requirement .

"M" stands for multi-role , the "Q" for unmanned aircraft. This version can not only recognize and observe targets, but can also be used to combat them. The equipment includes an additional multispectral target system with which two AGM 114 Hellfire missiles can be guided to the target by laser marking. This makes the MQ-1 Predator the first unmanned "combat aircraft" and thus represents a milestone in military aircraft development, which is given a new direction by the MQ-1.

As with the RQ-1, the A version of the MQ-1 is the pre-production model. The first series machines were delivered to the 17th reconnaissance squadron of the US Air Force in Indian Springs (Nevada) and were called the MQ-1B. The converted RQ-1K and L machines are operated under the designation MQ-1K and L. In March 2011 the last drone was delivered to the USAF. It is to be replaced by the MQ-9 Reaper in the future. Production stopped in 2015.

An extensive new development based on the MQ-1 is the MQ-9 Reaper , initially designated "Predator B" ("Reaper" = Grim Reaper ). Among other things, the existing piston engine was replaced by a Honeywell TPE331 - Turboprop replaced -Triebwerk. The MQ-9 is larger than the MQ-1 and has a higher range, flight duration and speed. It also has a higher weapon carrying capacity , which means that a wider range of missiles and bombs can be used. 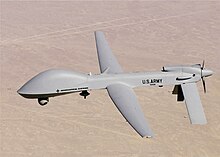 The MQ-1C Gray Eagle is a further developed MQ-1B Predator for the US Army and took off for the first time on June 6, 2007. It is equipped with the 100 kW Thielert Centurion 1.7 multi-fuel engine, which enables the drone to have a higher payload while improving flight performance. Since 2008, the MQ-1C, also classified as ERMP-UAV (Extended-Range Multi-Purpose), has replaced the RQ-5 Hunter in the US Army , which is primarily intended to improve close air support. The US Army initially referred to the MQ-1C as MQ-12 Warrior (also Warrior Alpha or Sky Warrior), but the Pentagon rejected this designation and changed it to MQ-1C. In August 2010, the MQ-1C was given the nickname Gray Eagle . The manufacturer only calls the drone the "Gray Eagle".

General Atomics also offered the MQ-1C to the US Navy as part of the “Maritime Surveillance” program. The MQ-1C in combination with the P-8 Poseidon should have taken over the maritime surveillance of the US Navy. In the corresponding selection process, the MQ-1C was subject to the RQ-4N from Northrop Grumman in August 2008 , which has since been renamed the MQ-4C.

On April 20, 2009, a UAV provisionally designated "Predator C" completed its maiden flight. The machine is based on the MQ-9 Reaper (consists largely of composite materials), but is the first Predator model to use a turbofan engine . This is the model PW545B from Pratt & Whitney Canada, which is already used on the Cessna Citation XLS business jet . In combination with the 20.1 m long wings, which now have a sweep of 17 degrees, the “Predator C” reaches a top speed of around 740 km / h. The flight altitude increases to over 18,000 m. The armament or additional sensor equipment is carried in a central shaft about 3 m long. The “Predator C” is now referred to as the Avenger by General Atomics. 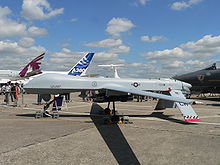 Armament up to 204 kg at two external load stations:

Armament up to 360 kg at four external load stations:

The MQ-1 are operated together with the MQ-9 from the following military airfields :

Italy has also bought RQ-1 drones, the last of the type manufactured by General Dynamics being delivered to Italy in 2015.