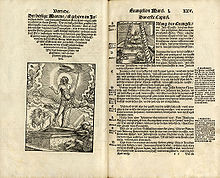 Hieronymus Emser (born March 26, 1478 in Weidenstetten near Ulm , † November 8, 1527 in Dresden ) was a Catholic theologian and opponent of Luther .

Emser studied law and theology in Tübingen from 1493 and in Basel from 1497 . In 1504 he gave lectures at the University of Erfurt , which were also heard by Martin Luther. The following year Emser earned his Bachelor of Theology and the secretary and chaplain of the Duke later became George the Bearded of Saxony .

In 1505 he dedicated a German-language poem to the Duchess Barbara of Saxony in defense of the dignity of the marital status ( Eyn deutsche Satyra vnd straffe des Eebruchs ) with many ancient examples and learned comments. The term satire is still used here in the sense of "denouncing a vice".

From 1519 onwards Emser had a passionate, literary dispute with Luther. Since Emser accused Luther of errors and lies in his translation of the Bible , for example in the Leipzig pamphlet Aus Wasgrund vnnd vrsach Luther's interpretation of the nawe testament / the common one had been predicted from 1523, he in turn translated the new one on behalf of Duke George of Saxony Will in German. In this work he revised Luther's version with recourse to the Latin Vulgate , as the church rejected Luther's word creations and translations. In 1527, this work was printed in Dresden under the title Das naw testament nach lawt der Christian kirkerechte text / corrected / und widerumb brought in and a second edition was published just a year later. This translation was widespread among the Catholic population and was used by Johannes Eck in 1537 as the basis for his Upper German translation of the New and Old Testaments. A Low German transmission based on Emser had already appeared in Rostock in 1530.

Emser died in 1527 and was buried in the Frauenkirchhof in Dresden.

Satirical depiction of Martin Luther's opponent. Woodcut of a leaflet at the time of the Roman Trial with mocking animal masks: on the far left the Franciscan Thomas Murner as a tomcat, next to him the theologian Hieronymus Emser as a buck Pope Leo X. as the antichrist is designated as the lion in the center of the picture , on the right the Ingolstadt theology professor Johannes Eck as a pig and the Tübingen theology professor Jakob Lemp as a dog. The caption shows that Leo X. Eck promised a cardinal's hat and money, in return Eck should force Luther down.