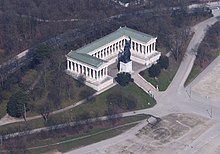 Interior view of the hall of fame

The Hall of Fame is a three-winged Doric columned hall designed by Leo von Klenze on behalf of King Ludwig I of Bavaria on the edge of the Isar slope above the Theresienwiese in Munich . It was built in the years 1843 to 1853 together with the statue of Bavaria and forms a structural unit with it. The ensemble is enclosed by part of the Bavariapark .

The hall is 68 meters wide and 32 meters deep. It has an eaves height of 16 meters and stands on a 4.3 meter high, slightly sloping base. The roof is supported by 48 front columns (height 6.95 meters, diameter 1.25 meters) and the rear wall. The hall was built from Kelheim limestone .

With its building and the busts of important people from Bavaria exhibited in it, King Ludwig wanted to  convey a self-portrayal of Bavaria - especially from the " tribes " Palatinate , Franconia and Swabia , which only came to the old Bavaria around 1800 . In connection with the monumental Bavaria statue, he aimed to recognize the “cultural New Bavarian dignity ” and “to make it fruitful for the rank of the new, all-Bavarian state”. The dedication read: "In recognition of Bavarian merit and fame, this hall was built by Ludwig I, King of Bavaria".

History of the origin of the hall of fame 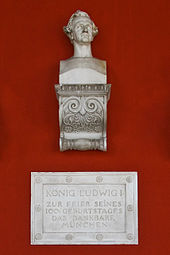 Bust of Ludwig I in the Hall of Fame

The youth of Ludwig I was shaped by Napoleon's claims to power on the one hand and Austria on the other. At that time , the Wittelsbach family was a plaything between the two great powers. Until 1805, when Napoleon "liberated" Munich in the third coalition war and made Ludwig's father Maximilian king, Bavaria was repeatedly a theater of war with devastating consequences for the country. Only with Napoleon's defeat in the Battle of Leipzig in 1813 did Bavaria really enter a phase of peace.

Against this background, Ludwig was already thinking, as Crown Prince, about a "Bavarian of all tribes" and a "larger German nation". These motives and goals motivated him to undertake several construction projects for national monuments such as the constitutional column in Gaibach (1828), the Walhalla above the Danube between Regensburg and Donaustauf (1842), the Hall of Fame in Munich (1853) and the Liberation Hall near Kelheim (1863) ), all of which the King financed privately and which, in terms of form and content, purpose and reception, form an artistic and political unit that is unique for Germany despite all internal contradictions.

Ludwig, who succeeded his father to the royal throne after his death in 1825, felt closely connected to Greece, was an ardent admirer of ancient Greece and wanted to transform his capital Munich into an "Isar Athens". With this in mind, he had several monumental buildings and memorials in various varieties of the classicist style erected with Bavaria, especially in Munich, in front of the Hall of Fame . The most famous of these buildings include the ensemble on Königsplatz (from 1815) with the Propylaea , the Glyptothek and the Collection of Antiquities (1848), the Obelisk on Karolinenplatz (1833), the Feldherrnhalle (1844) and the Siegestor (1850). Ludwig's second-born son Otto was proclaimed King of Greece in 1832 .

The idea of ​​the Hall of Fame matured in a long process. Even as Crown Prince Ludwig developed the plan to erect a patriotic monument in the royal seat of Munich. On July 25, 1809, he asked the painter and gallery inspector Johann Georg von Dillis to have the historian Lorenz Westenrieder draw up a list of "great" Bavarians of all classes and professions. In 1824 Ludwig wrote a note according to which he had already chosen the location on the slope edge above Theresienwiese for a Bavarian hall of fame.

About two decades later, in May 1828, the poet and then Bavarian Minister of the Interior Eduard von Schenk presented the now crowned Ludwig with another list of famous Bavarians, which supplemented an existing list by Freiherr von Hofmayr .

In February 1833, Ludwig announced a competition for the building project. Friedrich von Gärtner , Leo von Klenze , Joseph Daniel Ohlmüller and Georg Friedrich Ziebland were invited to participate . The competition was initially intended to collect initial ideas for the design of the Hall of Fame, which is why only the key project data were given in the tender: The hall should be built above the Theresienwiese and offer space for around 200 busts.

In contrast to the invitation to tender for the Walhalla in 1814, which explicitly called for a rectangular columned hall, the competition program for the construction of the Hall of Fame did not prescribe a preferred architectural style; the only requirement was: "This building must not be a copy of the Walhalla, as it is there were also many Doric temples, no copy of the Parthenon ”. This provision did not rule out the classicist architectural style of the parallel Walhalla project, but it seems reasonable to assume that the architects should be encouraged to propose a different architectural style. Since the designs of the four participants have largely been preserved, it offers an interesting insight into the history of the origins of the Hall of Fame.

The planning phase for the Hall of Fame coincided with the artistic confrontation between classicists, on the one hand, who felt connected to the aesthetics of Greek and Roman antiquity , and romantics, on the other, who based their artistic expression on the formal language of the Middle Ages .

This dispute broke out at the beginning of the 19th century after the Wars of Liberation and the Congress of Vienna in 1814 and reached its climax in the 1830s. In many cases, the dispute was rooted in different political views: When the national movement in Germany had lost the unifying factor of resistance to Napoleonic heteronomy after the wars of liberation , the nationalist camp split, and the art world was divided from then on: while the classicists Feeling committed to the Enlightenment ideal of the culture nation, the Romantics associated the nation with terms such as people , religion , history and tradition .

Even when planning the Walhalla , Leo von Klenze, an advocate of classicism, quarreled with the romantically influenced builders Peter Cornelius and Karl Friedrich Schinkel , who were of the opinion that a German national monument should be in a typically German architectural style - and the Gothic style was considered to be such  - and viewed the use of classic style elements as a betrayal. Cornelius commented on Klenze's designs for the Walhalla in 1820 as follows: “When we come to the design, the question arises, why should the largest German and only German memorial be so absolutely Greek?” Klenze, on the other hand, saw an “immeasurable accumulation” of decorations and in the Gothic regarded it as "a victory of craft over art". The neo-Gothic style is therefore not an art, but a purely manual and technical exaggeration. Only in the classical music did Klenze see the “truly beautiful”, which “stands high above everything historical and popular”. He only found this architectural style to be generally human and timeless.

In the competition for the Hall of Fame, this was not only a new edition of artistic and architectural, but also of ideological and political debate. 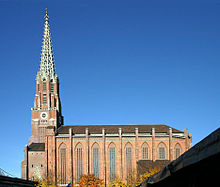 In March 1834, Ludwig I decided against the Gärtner, Ohlmüller and Ziebland projects, primarily for cost reasons, and commissioned Klenze to build the Hall of Fame. Undoubtedly, the colossal statue particularly impressed him about Klenze's design, as such a large sculpture had not been realized since ancient times. Flattered by the idea of ​​erecting statues as imposing as the admired ancient rulers, Ludwig I wrote after his decision in favor of Klenze's design: "Only Nero and I can build such colossi."

The ensemble was actually built from 1843 to 1853 , with the Hall of Fame built according to Klenze's ideas, while the Bavaria was Germanised in the romantic sense by Ludwig Schwanthaler , which was indicated by the figure's bearskin . She wears the sword of peace and has a lion at her side as an attribute of strength.

The busts of 74 people to be honored were placed inside the Hall of Fame in 1853 , and ten new ones were added in 1868. In 1888, on the occasion of the celebrations for the 100th birthday of Ludwig I, a bust of the king himself was placed in the center of the central wall in the hall of fame, including a plaque with the inscription: KING LUDWIG I TO CELEBRATE HIS 100TH BIRTHDAY, THANKFUL MUNICH.

During the Second World War , the Hall of Fame was hit in one of the air raids on Munich in 1944. In 1966, the Bavarian Council of Ministers decided , following the will of the royal donor, not only to preserve the Hall of Fame as a museum, but to continue it in such a way that Bavarian personalities who have rendered services to the people and the state should continue to be honored by displaying their busts . With this decision there was movement in the reconstruction of the war ruins, which were then repaired in the year of the Olympic Games in Munich 1972 and reopened on October 26th with the preserved and restored busts.

Some of the damaged busts have been restored or recreated from images, while others are lost forever. Busts for people who have since been accepted into the Walhalla have not been replaced either . In 1972, 1976 and 1987 a total of 17 new busts were erected. 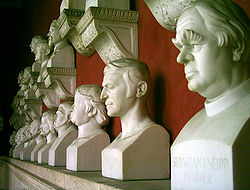 Busts in the north wing, in front Sebastian Kneipp

The busts should and should continue to look as lifelike as possible, which was or is relatively easy for people who are still alive or who have recently died. Historical figures were reproduced using existing images or descriptions. For Ludwig I, as with the Walhalla, the accuracy of the busts was a personal concern, as various correspondence show.

The selection of the early busts reflects the political and educational intentions of Ludwig I. On the one hand, through the targeted selection of Franks , the Bavarian Palatinate and Swabia, the patriotic feelings of these New Bavarian "tribes", which only came to Bavaria after 1800, were to be strengthened. More than half of the busts erected from the start honor people from New Bavaria, with a special focus on the cities of Nuremberg and Augsburg . On the other hand, the selected greats show those aspects in philosophy, theology, art and science that Ludwig I wanted to bring closer to his people.

The spelling of the names and abbreviations as well as the job titles in the following list follow the lettering on the busts. (Order of lists: from left to right.)

Memorial plaque for busts destroyed in 1944 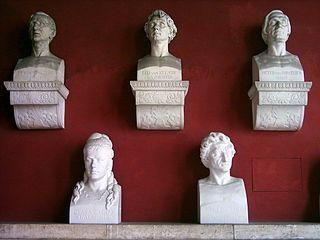 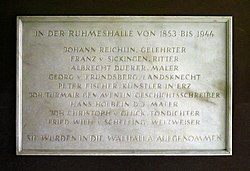 * Gluck's real name was Christoph Willibald . Presumably the wrong name Joh. Was transferred from a bust of Gluck in the Munich residence , which also erroneously referred to Johann Christoph v. Gluck is labeled.

In the Munich Residence , a largely unknown marble bust of Wolfgang Amadeus Mozart can be seen, which Ludwig had commissioned as Crown Prince and which was probably also intended for one of his Hall of Fame projects. At that time, however, the bust was not on public display, possibly because, according to tradition, Mozart's widow Constanze did not recognize the sitter as her deceased first husband during a visit to Munich in 1835. So the picture remained initially in royal private ownership, in 1959 it was sold to the Bavarian Palace Administration and only moved to the depot there for decades until it was made publicly accessible on the occasion of the Mozart year 2006.

As her diploma thesis and in protest against the “predominance” of male busts, an art student modeled her own bust in plaster in November 2006 and secretly set it up in the hall of fame. The administration only noticed her after seven months following a media report, so the bust was removed.

In the north wing of the Hall of Fame