This article describes the sculptor and builder. For the Protestant church reformer see Adam Krafft , for the publisher Adam Kraft (publisher) .

Self-portrait of Adam Kraft from 1496 at the sacrament house in St. Lorenz in Nuremberg

Adam Kraft was born in Nuremberg as the son of a carpenter. Apart from the usual years of wandering at the time , which he spent in Ulm and Strasbourg , he only worked in Nuremberg and the surrounding area. Not much is known about his life. Despite his two marriages, he appears to have remained childless. He only had a small business with two or three workers. Despite numerous orders, he found himself in financial difficulties throughout his life.

The Sacrament House in St. Lorenz in Nuremberg

His masterpiece is the Sacrament House in St. Lorenz in Nuremberg, a 20.11 meter high Gothic tower made of sandstone with its multitude of figures (depictions of the Last Supper , the crucifixion and the resurrection of Jesus Christ ), pinnacles and tracery braided tendrils of a tree . The base of the sacrament house is supported by three figures: Kraft immortalized himself in the middle one, the other two perhaps represent his journeymen who were involved in the work. Despite its filigree shape and the severe damage to St. Lorenz from bombing in the Second World War , the sacrament house was protected from destruction by a plaster covering . Only the 7 meter high peak, which hugs the vault, was reconstructed after the war.

Another sacrament house he created is located in the Sankt Andreas Church in Kalchreuth north of Nuremberg.

In addition to the St. Lorenz sacrament house, the Schreyer-Landauer epitaph on the outer wall of the east choir of St. Sebald in Nuremberg is one of the most important works by Adam Kraft. The epitaph, donated by the Nuremberg patricians Sebald Schreyer ( house of God of the Sebalduskirche as well as a friend of Albrecht Dürer and Kraft) and Matthäus Landauer, was created in the years 1490-92 and is probably a kind of masterpiece of the sculptor, with whom he dedicated himself to the sacrament house that was built shortly thereafter St. Lorenz could recommend. The epitaph consists of three stone reliefs composed in the manner of a winged altar , on which scenes from the Passion of Christ are depicted in an almost picturesque manner .

A large part of his works is on loan at the Germanisches Nationalmuseum : reliefs of the stations of the cross from Nuremberg Castle to St. Johannis , relief from the city ​​scales , an Anna selbdritt , etc. 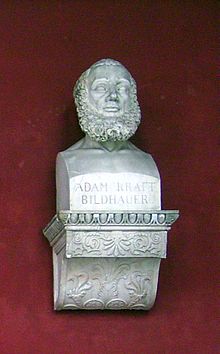 Bust of Adam Kraft in the Hall of Fame in Munich

Adam Kraft was buried in Schwabach near Nuremberg on January 21, 1509. There the Adam-Kraft-Gymnasium is named after him. In honor of Adam Kraft, his bust was placed in the Hall of Fame in Munich . The Adam Kraft Realschule in the southern part of Nuremberg is also named after him. With the construction of the Düsseldorf Art Academy , his name was carved into the frieze of the facade on the west side (Rhine side) among the important sculptors.