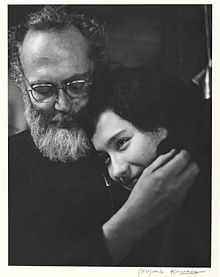 The young Gene attended the parish school in his hometown. Smith made his first recordings at the age of 15 and soon began working occasionally for two local newspapers, The Wichita Eagle and The Wichita Beacon . In 1936 he suffered a personal catastrophe: his father took his own life for economic reasons.

1936 / 37 he studied photography at the Notre Dame University in South Bend , Indiana , to then in New York for the magazine Newsweek and the agency Black Star to work. After three months he was fired from Newsweek because he preferred the 35mm format. He became a freelancer for Life , Coliers, Harper's Bazaar and The New York Times . In 1939 he received a permanent contract with Life , which he resigned two years later; the usual social reports bored him. He also disapproved of the prevailing opinion at Life magazine that the photographer's job was finished with the completion of the negatives: The Life editors replied that Smith was unreasonable and that other employed photographers had no problem with the editorial principles. Every published photo essay was therefore preceded by an unpleasant exchange of insults, ultimatums and compromises.

During the Second World War he photographed for the press agency Ziff Davis Publishing Company , for which he followed the Pacific War . In March 1944 in New York, when he realized that half of his photos had been censored , he quit Ziff Davis and returned to Life . In June he photographs the Battle of Saipan , a month later the Battle of Guam and again Saipan in September. He fell ill and spent Thanksgiving in New York. Then the Pacific again: February 1945 the battle for Iwojima , in April for Okinawa . On May 22, Smith was seriously injured by shrapnel. In the following two years he was operated on several times. In the course of 1946 he started again with photography.

The next few years brought unique reports for Life Magazine: "Country Doctor" (1948) (Smith accompanied a country doctor), "Spanish Village" (1950) and others. a. his best-known recording “Walk to Paradise Garden”, in which two small children step out of a forest into a clearing. Smith's loneliness and integrity as an artist made him a hero. He was an inspiration to many, but also a pariah in terms of convention. He was known to work on a single print continuously for several days while the magazine waited. His obsession with photography began to wreak havoc in his personal life. He spent more and more time in his studio and less and less time at home with his family. In September 1950, exhausted from his work, Smith was arrested while wandering aimlessly in the streets near his studio wearing only boxer shorts. From 1952 to 1954, Smith only completed six assignments with Life magazine, as he needed more and more film material and time for routine shootings, which resulted in high costs for the editorial team. A report about Albert Schweitzer in Lambaréné gave rise to parting with Life . a. as the magazine wanted to re-mix with his artistic views.

Smith's excessive behavior wasn't just limited to photography. According to various letters, he estimated his record collection at 25,000 pieces. Including music of all possible directions, but above all jazz and classical music. Because of his heavy drinking and amphetamine use , he was able to work through three to four days only to collapse from exhaustion afterward.

In order to maintain his artistic freedom, Smith joined the well-known photography agency Magnum Photos in 1955 and devoted himself to a comprehensive report on Pittsburgh and its ironworks. He felt an urgent need to create a major work so that the Life editors would regret the end of their collaboration. But Smith couldn't get the Pittsburgh essay into a version that pleased him. In 1958 Smith left Magnum to pursue his interests completely independently. On one of his many trips to Japan, on which he met his second, Japanese wife, Aileen, the report was made about Minamata disease , where the chemical company Chisso dumped mercury-containing sewage into open ponds. As a result, many newborns were born deformed. Public relations, supported by Smith's photos, allowed the company to be brought to justice. The book “A warning to the world…. Minamata ” became world famous in 1972 and all major magazines published Smith's photos. During the recording, he was beaten up by the works security. The blows, especially to the eyes, caused Smith to lose sight of his life and he withdrew from the public.

From 1957 to 1965, Smith spent most of his time in a New York loft on Avenue of the Americas (Sixth Avenue); During this time, around 40,000 individual recordings were made in which he portrayed the jazz musicians working there such as Thelonious Monk , Charles Mingus , Miles Davis , Roland Kirk , Zoot Sims , Albert Ayler or Ornette Coleman or captured street scenes from the window. He documented the working atmosphere in this loft on 1,740 tapes with around 4,000 hours of material, which were only found in his estate in 1998. Films and tapes were then evaluated in a twelve-year archive work by Sam Stephenson, lecturer in Documentary Studies at Duke University, shown in an exhibition and published in 2009 in the book The Jazz Loft Project .

His photo A walk to paradise garden was selected for the The Family of Man exhibition. In December 1975, Smith's doctor wrote a letter detailing his patient's physical condition. At the age of 57, Smith had " diabetes , cirrhosis of the liver , relatively high blood pressure, chronic venous congestion with stasis dermatitis, cardiovascular disease and disease of the coronary arteries in an enlarged heart." He died at the age of 59, completely embittered and impoverished, from the consequences of a stroke. caused by his alcohol and drug abuse. His estate is in the "Center for Creative Photography" at the University of Arizona in Tucson.

In addition to technical perfection, which he did not neglect even under adverse circumstances, his emotional approach to the subjects he photographed was characteristic of his photographic style. Although he saw himself as a neutral observer and made the highest demands on his journalistic ethics, his view was never cold or voyeuristic, but always characterized by compassion and passion. With this attitude and his reports, he shaped American reportage photography for more than three decades.

W. Eugene Smith has set up a New York City- based foundation from his estate . As a lasting reminder, this W. Eugene Smith Memorial Fund has awarded the W. Eugene Smith Grant in Humanistic Photography ($ 30,000) annually since 1980 . Since 1996, the Howard Chapnick Grant, which is endowed with $ 5,000 and awarded annually, has also been added under the same foundation umbrella .