from Wikipedia, the free encyclopedia
This is the spotted version , flagged on May 23, 2020 . There are 2 pending changes that have yet to be viewed.

This article covers the University of "Notre Dame" in Indiana (USA), for other universities with this name see Notre Dame University 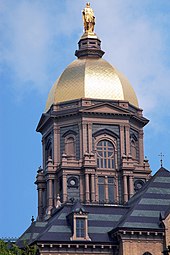 Basilica of the Sacred Heart of Jesus , Church of the University and the Congregation of the Holy Cross

Main building from the air

The University of Notre Dame du Lac is a private Catholic university in the US state of Indiana . It was founded in 1842 by the French priest Edward Sorin . It has the highest research classification of American universities as R1 University with "very high research activity." In the rankings, Notre Dame competes with other elite universities such as Stanford, Yale and Duke. In 2016, the Department of Notre Dame was ranked the 11th best program in the world, and in theology and religious studies it was ranked No. 2 and 7 respectively.

The campus is located in St. Joseph County near South Bend . The university is run by Catholic clergy from the Congregation of the Holy Cross . Until 1972 only men were allowed. The landmark is the Golden Dome , a domed building with a gilded roof, on the top of which there is a statue of the Holy Mother Mary . The library with the Dante collection and the Zahm Hall in honor of Reverend John Augustine Zahm are also well known .

The University of Notre Dame is also known for its School of Architecture , an architecture faculty that has dedicated itself to teaching traditional and pre- modern architecture and urban planning (including in the sense of New Urbanism ). Every year it awards the renowned Driehaus Architecture Prize . Under the direction of Theodore Hesburgh , who was friends with Martin Luther King , Notre Dame became a center for human rights in the United States.

The university's sports teams are nicknamed Fighting Irish and their mascot is a leprechaun , which explains the once high presence of Irish-Americans in the ranks of the students. The university's American football team was particularly successful with 13 national championships and contributed to the university's national reputation.

With a current endowment of USD 13.8 billion, it is among the ten richest universities in the USA.

The university's American football team - the Notre Dame Fighting Irish - enjoys cult status in the United States due to its successful past. With eleven championship titles, the Irish are one of the most successful football teams in college football . The team traditionally dresses in navy blue and gold: golden helmet without any decoration, navy blue jersey with white numbers and gold-colored trousers.

The university’s football department, as an independent in the NCAA, designs its game schedule (and television contract) itself, while the other sports ( basketball , soccer, etc.) are affiliated with the Atlantic Coast Conference . Notre Dame is also the only university that has its own TV contract to broadcast its home games nationally.

The team became famous as early as the 1920s when it emerged victorious in 88 percent of the games and the team with the four players known as the Four Horsemen of Notre Dame won the national championship in the 1924/1925 season. The story of the team was first filmed in 1930. The former star player and coach Knute Rockne, who wanted to visit the filming, was killed in a plane crash. In 1940 the Hollywood film Knute Rockne, All American was made . All American stands for the all-star college football team elected annually by sports journalists . In addition to four players who became known as the four horsemen of the apocalypse , George Gipp, who died of pneumonia in 1920 (played by Ronald Reagan in the film ), played a key role. His last words "Win one for the Gipper" were cited as motivation in decisive game situations. Reagan kept the nickname "Gipper" after this role and was quoted with the slogan in his later political career. 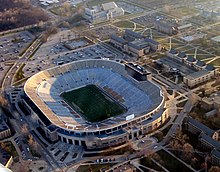 Ballpark of the NDU

The home games are played in the 80,795-seat Notre Dame Stadium , which was renovated and expanded in 2014-2018 for more than 400 million dollars. Until the renovation in 1996, the stadium had a capacity of 59,075 spectators. Since 1961, with one exception, all home games have been sold out. For this reason, the admission tickets are allocated in a fixed manner: Students, teaching staff, employees and sponsors can purchase tickets. Former students must first win the right to buy tickets in a lottery (which can only be entered if a certain minimum annual amount has been donated to the university). This has become necessary due to the enormous demand, which by far exceeds the capacity of the stadium.

The Irish were ranked eleventh among more than 100 teams in Division IA in 2006 with a 10-2 record (AP poll). They lost on January 3, 2007 the Sugar Bowl in the Louisiana Superdome in New Orleans against the LSU Tigers with 14-41. Quarterback Brady Quinn has received two awards: on the one hand, with the prestigious Johnny Unitas Golden Arm Award, previously won by players like Matt Leinart or Peyton Manning , and the Maxwell Award .

In contrast, the 2007 season for the Irish was marked by defeats and bitter disappointments. There were three wins against nine losses, including a 0:38 shut-out against arch-rivals Michigan and the first loss against a Navy team in 43 years.

The 2012 regular season ended with twelve wins and no defeat. The Irish are classified as the best team within Division IA at the end of 2012 .

Year after year, the university is one of the top 20 universities in the United States (including the US News and World Report and Forbes rankings ). The Philosophical Gourmet Report (2014-2015) rated the University of Notre Dame du Lac as the best university in the subjects of religious philosophy , philosophy of the Middle Ages and philosophy of mathematics in the entire English-speaking world. In the ranking of Bloomberg Businessweek magazine, the university was ranked number 1 in the USA for undergraduate programs in 2013 and 2014 .