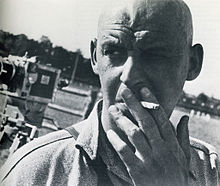 Rodchenko was the son of Mikhail Mikhailovich (1852-1907), a landless farmer, and Olga Evdokimovna (1856-1933) Rodchenko, washerwoman, born in 1891 in Saint Petersburg. His father worked as a prop master in the "Russian Club" on Nevsky Prospect , while the family lived in an apartment above. In 1901 the family moved to Kazan , where Alexander Rodchenko attended school until 1905 and trained as a dental technician from 1908–09.

Rodchenko then studied with Nikolai Ivanovich Feschin and Georgi Medvedev at the Kazan Art School, where he devoted himself to painting between 1910 and 1912. His paintings from this period are rich in warm tones, red, yellow and ocher, and he also experimented with the contrasting colors blue-red and green-red. After 1912 his interest in black grew. Rodchenko's art in this period was strongly influenced by Art Nouveau and by drawings by Aubrey Beardsley (female figure, 1913). In addition to his studies he gave drawing lessons and painted decorations for clubs. At the Kazan Art School he met his future wife Varvara Stepanova . In 1914 Rodchenko attended the public readings of the futuristic poets Vladimir Mayakovsky , Dawid Burljuk and Vasily Kamensky . 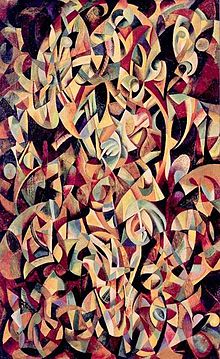 In 1914 Rodchenko finished his studies at the Kazan Art School and moved to Moscow, where he studied sculpture and architecture for three years at the Stroganov School and increasingly turned to abstract painting . In 1915 he made a series of drawings known as the compass-ruler series. In contrast to Wassily Kandinsky's abstract painting , these pictures do not require any additional theories or associations. After participating in the “Magazin” exhibition organized by Vladimir Tatlin , Rodchenko began to show his works at Moscow exhibitions in 1916 and was thus able to establish himself as an artist of the Russian avant-garde. The following year he redesigned the interior of the “Cafe Pittoresque” together with Tatlin, Georgi Jakulow and other artists. From 1918 to 1922 he worked in the Department of Fine Arts (ISO, Russian Изобразительный Отдел ) of the Commissariat for Popular Education (Narkompros, Russian Народный Коммиссариат Просвещения ) as a member of the Museum of Fine Arts . At the same time he was chairman of the acquisition committee for the Museum of Artistic Culture and, together with Olga Rosanowa, was responsible for the sub-department of industrial art . 1918-26 he worked as a teacher for the theory of painting at the Moscow "Proletkult School".

From September 1919 to October 1920 Rodchenko lived with his wife Varvara Stepanova in the house of Wassily Kandinsky at Dolgy-Gasse 8. From 1918 to 1920 they took part in the 5th, 10th and 19th State Painting Exhibition together. In 1919 Rodchenko began work on a large cycle of linear compositions that he called "lineism". The artist's intention was to show that the line can function as an independent form in painting and graphics. In another series that was created in parallel, Rodchenko was more radical and more definitive in his conception of sculpture. He dispensed with the traditional base and a main view and based each work on a modular principle. The "lineism" formed the basis for Rodchenko's subsequent spatial constructions, which Rodchenko created in 1920/21. The spatial constructions are generally formed from lines and surface figures that are statically or dynamically attached to an axis at different angles. In the beginning, the artist worked with closed geometric structures, consisting of straight elements in the shape of a circle, triangle or rectangle, and solving simple spatial problems. Later he added surface elements with curved contours and open shapes, which accentuate the space and intensify the light-shadow effects. The later room constructions represent the solution to more complicated spatial relationships. Originally, the artist wanted to make the work from white light metal, but since refined metal was not available at that time, he had to use thin, white-painted plywood.

The experimental sculptures by Tatlin and Rodchenko from the early 1920s, with their emphasis on material, technical, functional and standardized forms, have a lot in common with the later goals and ideas of minimalism , such as those formulated by Donald Judd . Rodchenko used simple, unprocessed square timbers of the same length, which he put together in different formations without a base.

Another step in Rodchenko's artistic development was the series of objects from 1920–21. They are movable structures hanging freely from the ceiling. These consist of thin plywood, which the artist cut into various geometric shapes: squares, hexagons, ellipses, etc. a. Rodchenko again separated concentric elements of the same width from these figures, which "fold out" in space so that the surface becomes a three-dimensional sculpture. Due to the movable suspension, the viewing side and the incidence of light change constantly.

Rodchenko, together with his wife Stepanova, devoted himself intensively to art as an experiment; the artist here is both a researcher and a scientist; the construction, the system, the appropriate use of materials are in the foreground of the artistic analyzes and experiments. Both are central figures in the second phase of the Russian avant-garde, constructivism . In spite of all practical application, Rodchenko's theory of constructivism has a strongly utopian trait, the belief in a world that is organized according to clear principles, in an immovable order in which everything living has its fixed place. “Life, this simple thing, has not been seen until now, not known that it is so simple and so clear that one only has to organize it and rid it of everything superfluous. Work for life and not for palaces and temples, not for cemeteries and museums! Working among everyone, for everyone and with everyone. There is nothing eternal, everything is fleeting. Consciousness, experience, goal, mathematics, technology, industry and construction - that is paramount. Long live constructive technology. Long live the constructive attitude in every activity. Long live constructivism ”(Rodchenko 1921).

In 1921, Alexander Rodchenko exhibited a triptych in the exhibition “5 × 5 = 25” in Moscow , which consisted of three monochrome canvases (62 × 52.5 cm each) in the colors red, yellow and blue. The artist said: “I brought painting to its logical end and exhibited three pictures: a red, a blue and a yellow, and this with the statement: everything is over. It's the basic colors. Every surface is a surface and there should no longer be any representation. "

In the 1920s he worked as a painter and graphic artist and mainly created commissioned works. After that he gave up the attempts and experiments in the field of pure art and turned to productivist art. The ideology of productivism rejected the traditional function of art, exhibited in museums or used as decoration. Rodchenko was engaged in work in the field of graphics, design and handicrafts. According to Rodchenko, art should leave the museum and become an element of social being in the form of objects. From that moment on Rodchenko's art took on a social character. From 1920 to 1930 Rodchenko was professor at the art schools in Moscow ( Wchutemas ) and Leningrad ( Vchutein ), from 1922 dean at the faculty for metalworking.

In 1921/22 he tried his hand at theater, film and polygraphy at the same time, took part in competitions for badges, trademarks and everyday objects, worked on projects for work clothing and made sketches for a tea set. He also worked for Alexei Gan's magazine Kino-fot . From 1923 Rodchenko worked in the field of typography for the publishers Molodaja Gwardia , Gosisdat , Krug , Transpechat , the magazines LEF , Nowy LEF and others. a. Commercial advertising and polygraphy were the first areas in which Rodchenko worked not only occasionally, but from 1923 onwards.

His new circle of interests led to a close creative collaboration with the famous and influential poet Vladimir Mayakovsky . He created illustrations for his poem “Pro eto”, in which the poet sings about his love for Lilja Brik and in which Rodchenko assembles her portraits of different ages in all possible variations. The result is a unique connection between photomontage and constructivist design, whereby Mayakowski's verses are visually modeled.

Rodchenko and Mayakovsky jointly produced around 50 posters, almost 100 company signs, packing and candy paper templates, neon advertising and picture advertising for newspapers and magazines in just under two years. They worked for the department store GUM , Mosselprom , Gosisdat, Resinotorg and for the unions. The content of Mayakovsky's and Rodchenko's advertising activities went far beyond advertising the products of state-owned companies. The poet and the artist agitated for the development of technology, the improvement of working conditions and other social concerns. Rodchenko's style of advertising graphics was simple and clear and harmonized with the laconic, playful two-line lines of Mayakovsky. The advertising texts and images were functional, free of any superfluous information. Rodchenko worked with large, simply shaped, easily legible letters and often used large exclamation marks and question marks. The use of the arrow in the composition, the symmetrically arranged letters and other graphic elements made it easier for the viewer to decipher the poster.

Influenced by Dadaism , Rodchenko came to photography through photomontage, and soon became an important representative of the Russian constructivists . He was particularly known for his unusual perspectives, but also for the strong abstract graphic effect of his photos. Under the influence of the changed political guidelines in the 1930s, he turned to reportage and sports photography before giving up photography entirely in 1942 and working again as a painter.

Famous recordings are e.g. B. The stairs , girl with Leica or portrait of the mother . His standard cameras were the Leica and the FED from the Soviet manufacturer FED ( Charkow ; today's Ukraine ).

Alexander Rodtschenko and Varvara Stepanova have a daughter, Varvara Rodtschenko (* 1925), who also became an artist. Their son Alexander Lavrentjew (* 1954) is a professor at the State Artistic-Technical Academy SG Stroganow in Moscow.

Exhibitions during his lifetime