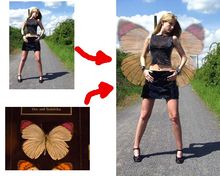 Example of a montage of photos and computer graphics

The term comes from the context of industrial civilization and is deliberately reminiscent of machine assembly and turbine assembly ( Gustavs Klucis , 1932).

The photomontage could already have a longer tradition, because it was already used in the middle of the 19th century for complicated scenic motifs that could not easily be photographed according to the state of the art at the time. The exposure time of such photos was mostly quite normal: purely technical reasons for the photo montage existed only in a few exceptional cases, mainly the bridging of large contrast differences and the achievement of an unusually large depth of field . Montage was necessary, for example, when a picture was to be taken of an interior with a window in which a landscape could be seen; For this purpose, two images were then assembled by partially covering the negatives with masking paint and then laying them on top of one another so that they fit. Only a professional could tell from the finished picture that it was created this way.

In other montages of this type, clouds were copied into a landscape photograph afterwards, or silhouette-like parts of the image were painted into the photo. In contrast to these pictures, which were ultimately supposed to represent completely normal recordings, there were the photomontages, which do not deny their montage-like manufacturing process. As Otto Croÿ aptly explained, in this way the rigidity of the motif was removed. The photomontage suggested that, with its help, the photographer was not only able to build up the picture formally, but that he could also let his imagination run wild in order to express certain ideas in the pictures. These photomontage concepts could be technically achieved using three different methods: The simplest method was a collage technique with the help of scissors and glue, whereby the assembly produced in this way could finally be photographed and thus reproduced as desired.

The “montage” by multiple exposures on the same image field was also fairly simple , which only required a practiced ability to judge how the images in the camera were to fit on top of each other. The advantages of working with a black background - which resulted in a transparent, smooth surface on the negative - or with alternating coverage of certain parts of the image field were soon recognized.

Ultimately, the most challenging method consisted of mounting two or more negatives while enlarging (a so-called "sandwich"), copying them one after the other onto the same positive paper. In the final phase after the positive development, the photographer mostly had to treat the transitions between the individual parts of the picture with the attenuator or the brush.

This is the oldest and most complex way of creating a photo montage. It is defined in such a way that you get a new picture by combining several negatives. By putting together several negatives, new images were created that were combined with masks and exposed on the same positive . The difficulty with the technology lay in perfectly coordinating the individual negatives in terms of perspective , size, lighting and depth of field.

At the beginning of photography, photos were taken on collodion plates, which had to be cleaned for reuse after each exposure. If this was not done thoroughly enough, the next shot would result in an undesirable double exposure . Some artists came up with the idea of ​​using this phenomenon as a design tool. This mainly happened in combination photography, which was practiced from 1850.

The positive montage is created from existing image material that the artist either produces himself or finds in journals, magazines and other graphic material. This technique is also known as adhesive mounting, because in its simplest form it consists of nothing other than cut or torn motifs that are glued together on a surface.

Here you are more flexible than in negative montage, as the picture elements can be moved anywhere on the background before deciding on a composition. It only becomes difficult when you have set yourself a realistic montage as your goal, because here too the different images not only have to fit together in terms of perspective, lighting, depth of field and size, but also in terms of paper texture, gradation and color. Well-known artists such as John Heartfield , who used this technique, reproduced the finished assembly in order to retouch the cut edges in the darkroom.

Digital montage is the most widespread photomontage technique today. Here, digital image material is combined with the help of image processing programs.

Digital photography made it possible to mount it comfortably on the computer using image processing programs. You have the option of scanning in the desired image material, reproducing it or taking a suitable photo yourself. A professional digital montage can only be created if you follow the same principles as with negative and positive montage, namely the perfect coordination of the image material. Even if an image processing program allows many changes afterwards, good starting material is a prerequisite for a realistic-looking montage.

The possibilities of video montages have also become more and more sophisticated in recent years.

Photomontage was and is often used in connection with political propaganda . Outside of political motivation, pictures of private individuals are often falsified in order to discredit them. The creation and dissemination of images used to manipulate other people and as fictitious "evidence" is therefore a criminal offense in many countries.

Not only in the scientific field, photo montages can better than ever represent and illustrate future, currently not yet feasible and also yet to be developed. In rapid product development and product design appropriate computer graphics, therefore, are frequently used.

The forerunners of photomontage can already be found in painting . In vedute painting, for example, parts of different landscapes were sketched with the help of the camera obscura in order to later merge them into a single one on the canvas. Another predecessor of the photomontage can be found in mannerism with Giuseppe Arcimboldo , who composed elements from nature, such as flowers and vegetables, in his paintings in such a way that the viewer could recognize a human head. The Surrealists also approached the collage through their painting , since they brought disconnected objects into context.

Another step towards photomontage was taken in Cubism , when Picasso and Braque incorporated foreign material into a work for the first time in 1912. This leads Kurt Schwitters from Dada in his Merzbilder continue through to the assemblage , which was a liberation from "Paint-need". Also in Futurism will Collage estimated as a design tool, for example in Marinetti's "Parola in libertà".

The term and the technique of photomontage was developed in 1916 in Dadaism . Who the actual inventor was is controversial, as Raoul Hausmann and Hannah Höch , as well as John Heartfield and George Grosz, claimed to have discovered the photomontage. At first the works were reminiscent of a wild jumble of picture elements, similar to futuristic painting. In order to be able to use them for political and business purposes, the way of working became more structured and, above all, clearer, which had a positive effect on the visual language.

The Dadaists knew how to deal with the medium of advertising and repeatedly caused surprises and scandals. The use of photos made the works more realistic, more provocative and more understandable for the viewer. In addition, the pictures gained a previously unattained immediacy and topicality. The Dadaists' sphere of activity was supposed to be the here and now; in their time they wanted to change something in the political situation through social criticism. Photo montage was the perfect means of expression to get your message across.

What started out as art is now used for commercial purposes. Nowhere are more photos manipulated, retouched and assembled than in advertising . Sometimes the change in reality is visible to the viewer, but most of the time the audience, the consumer, perceives the photomontage as completely normal and correct. It is increasingly difficult for the untrained eye to recognize a picture as a “lie”. The photomontage now goes so far that it is possible to digitally create entire worlds of images in which the difference between reality and appearance is no longer discernible.

In analog photography, retouching is primarily used to correct unclean work or unevenly exposed areas afterwards. It can also be done for the purpose of photo manipulation . With digital photography it became possible not only to perfect photos, but also to completely change the existing image (see image processing ).