Hannah Höch was the daughter of an insurance director, her mother was a hobby painter. She attended the secondary school for girls in Gotha from 1896 to 1904 . When she was 15, she had to drop out of school to take care of her siblings.

In 1912 Höch enrolled at the Berlin School of Applied Arts and thus emancipated herself from her middle-class parents. When the First World War broke out in 1914 , Höch traveled to Cologne to visit a large Werkbund exhibition. In the following year she became a student of Emil Orlik at the educational establishment of the Kunstgewerbemuseum Berlin . There she met Raoul Hausmann , who was already married, in 1915 and entered into a love affair with him that lasted seven years. For a long time, as a woman in art , Höch was seen primarily as a Dadaist at Hausmann's side and not as an independent artist. With him she stylistically developed the photo montage . From 1916 to 1926 she worked for Ullstein Verlag , mostly for magazine publishers. Through Hausmann, she got to know the Dadaist circles in Berlin in 1917. In 1919 she was on stage in a Dada revue with a children's pistol and pot lids.

In 1920 she took part in the First International Dada Fair and from that year onwards she participated in the annual exhibitions of the November Group. In the same year she and Hausmann visited the Dadaists in Prague. In 1922, Höch separated from Hausmann. After the breakup, he called after her that she had never been a "member of the club". Höch later said, quite self-critically: "If I hadn't spent a lot of my time looking after him and encouraging him, I would have achieved more myself." 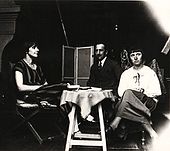 In 1924 she traveled to Paris for the first time. On the return trip she visited Piet Mondrian and his group De Stijl . The Soviet Union made it possible for Höch to take part in an exhibition in 1924. The German Art Association in Berlin invited her to an exhibition in 1925. In 1926 she met the Dutch writer Til Brugman , with whom she lived and worked in The Hague in 1929 and then in Berlin until 1936. Their joint book bill Minced appeared in 1935 in the Rabenpresse of Victor Otto Stomps . Avant-gardists such as Theo van Doesburg and Kurt Schwitters expressed themselves partially negative about this relationship.

In 1932 Höch got the opportunity to exhibit in the USA. In the time of National Socialism , Höch's work was considered “ degenerate art ” and was prohibited from exhibiting. Until 1938 she earned her living by designing dust jackets for novels that were published by Zeitschriftenverlag AG (ZAG). The publisher of these books was her Dutch friend Anthon Bakels , who also paid for her for a life-saving operation in 1934.

At some point between 1935 and 1937, Höch separated from Brugman. In 1938 she married the sales representative Kurt Heinz Matthies, who was 21 years her junior, and from whom she divorced in 1944; She traveled with him, sometimes for months, all over National Socialist Germany , including in neighboring occupied countries (e.g. Holland ). Stations, experiences, etc. during these car journeys, sometimes with a trailer, were recorded in notes in her diaries and thus documented, among other things, her experience of the November pogroms in 1938 or the German attack on Poland .

Some of Höch's late works, including Am Tränenpfuhl (1956) and Ausmontierte Seelen (1958), "exude the glaring artificiality of car paint, foils or plastic."

In 1965 Hannah Höch was appointed to the Academy of Arts in West Berlin . She was a member of the German Association of Artists .

The Council of Europe exhibition in 1977 at the Akademie der Künste on “Trends in the 1920s” distinguished Hannah Höch by showing 24 of her works. In the same year, 1977, the city of Berlin (West Berlin) awarded the artist an honorary professorship.

Since 1996, the State of Berlin has awarded the Hannah Höch Prize, endowed with EUR 15,000, for outstanding artistic life's work.

The city of Gotha named a path in the Sundhausen district after the artist. A bookshop on Gotha's main market also bears her name. There is a Hannah Höch community school in Berlin-Reinickendorf. 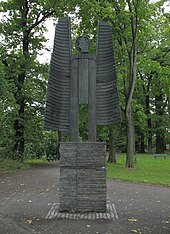 At the later famous "Dada fair" of 1920, the artist cut with the kitchen knife with the assembly created in 1919 . Dada represented by the last Weimar beer belly culture epoch in Germany . Sixty years later, the art historian Jula Dech subjected this complex panel painting, which later became a kind of icon of Dadaism, to an extensive investigation in which she systematically traced almost all of the individual assembly elements back to the context of their medial origin. With this deconstruction of her, published as a revision in 1993 in the paperback series Kunststück (see literature) published by Klaus Herding , the author set a new methodological standard for access to montage in general and for that of Hannah Höch's Dadaist work in particular.

Entrusted by the artist's heirs with a first inspection of her artistic estate, Jula Dech (together with Ellen Maurer) organized a first congress on her work at the Berlin Academy of Arts on the occasion of Hannah Höch's 100th birthday at the end of 1989 . At this symposium, Höch and DADA specialists from Europe and the USA dealt with the artist's work both analytically and art-historically as well as artistically and practically - comprehensively documented in the volume Dada between-talk to Hannah Höch, published by Dech / Maurer .