The title of this article is ambiguous. Further meanings are listed under Collage (disambiguation) .

The collage is both a visual art technique and a work of art created using this technique . Traditionally, a new whole is created by gluing different elements onto a base, hence the name (from French coller , "sticking"). There is also collage beyond the limits of the fine arts, namely as music videos in the style of Yes We Can , as literary collages in the style of Walter Kempowski , as text and sound collages such as Alfred Andersch's The Death of James Dean or as text-image collages Collages like Herta Müller's .

The term “collage” is borrowed from French, where it is derived from the verb “coller” (glue, glue) and from the noun “colle” (glue), which in turn comes from the Greek, “kόlla”. 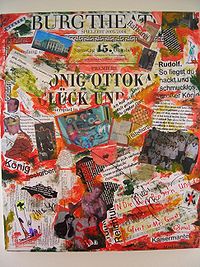 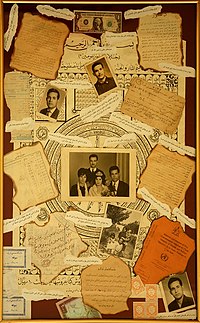 Collage as a "family memory" with photos, letters, document extracts and other texts

Collage in connection with graphic elements

An artistic collage can contain, for example, newspaper clippings , ribbons, pieces of colored paper, photographs that have been glued to a solid surface or canvas . The early collages of Cubism are called paper collé . Further areas of application are photo collages and diacollages , which consist entirely or largely of photographs, parts of photographs or slide material. The Décollage referred tearing of surfaces, such as poster breaks, to make visible to the underlying layers. If three-dimensional objects are combined with one another, the term objet trouvé is used for this .

The principle of collage was also transferred to other genres of art , such as music / acoustic art (sound, sound or music collages, see also the article " Sampling (music) "), to literature (see Montage (literature) ) and the movie.

The collage technique is transferred to three-dimensional objects in the assemblage .

The musical collage is the combination of various independent compositions to form a new musical work. While the medley or the potpourri connect the individual works with more or less well-composed modulation , the collage is characterized by the lack of transitions and the associated sound frictions. These frictions are intended by the composer of the collage.

There are also collages in the performing arts . A theater collage consists of scenic, poetic and literary elements and is often used to interpret contemporary or socially critical works (for example in the Polish theater before the fall of the Iron Curtain ).

Art movements in which collages and montages played a major role 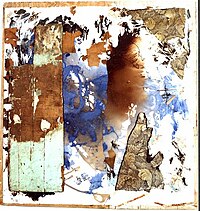 For the first time real objects were glued to the canvas: old wallpaper, sheet music, glass, newspaper; the collage was elevated to an art technique (see also: paper collé ).

Höch is considered to be the inventor of photo montage, a technique that she developed with Raoul Hausmann and that was quickly taken up by Johannes Baader , John Heartfield and George Grosz .

Typical of surrealism was the playful Cadavre Exquis , which also served as a source of inspiration for “great” works of art.

The collage is controversial in terms of copyright . One can see in it a non-free processing, in which the approval of the works of other authors must be obtained, or a free processing. A free adaptation is when the impression of the original compared to that of the new works "fades".