René François Ghislain Magritte (born November 21, 1898 in Lessines in the Walloon province of Hainaut , Belgium , †  August 15, 1967 in Brussels ) was a Belgian surrealist painter .

René Magritte was the first-born son of the tailor Leopold Magritte and the hat maker Régina Bertinchamp. He had two brothers, Raymond, born in 1900, and Paul, born in 1902. In 1910 the Magrittes family moved to Châtelet , where René Magritte began painting and drawing at the age of twelve. His mother took her own life in 1912 for reasons unknown by drowning herself in the Sambre at night . A traumatic event for the young Magritte, who was present when she was pulled out of the water . The father then moved with the three sons to Charleroi , an industrial city where life was very hard. There René attended high school and took refuge in the world of Fantômas novels and the literature of Robert Louis Stevenson , Edgar Allan Poe , Maurice Leblanc and Gaston Leroux .

In 1913 he met Georgette Berger (1901–1986), who was two years his junior and who also became his model. It was at this time that his first works were created, the style of which was impressionistic . Magritte studied at the Brussels Academy of Fine Arts from 1916 to 1918 . During his studies he created works with a cubist-futuristic touch, some of which are confusingly similar to those of the “ Cologne Progressives ”. He met Georgette Berger by chance in 1920 in the Brussels Botanical Garden . He married her in 1922 and earned a living as a draftsman in a wallpaper factory and from 1923 as a poster and advertising artist. In 1923 he sold his first painting, a portrait of the singer Evelyne Brélia.

Magritte met the later art dealer and artist ELT Mesens in 1920 as a piano teacher to his brother Paul. Mesens introduced him to the Dadaist movement , and Magritte became a contributor to agesophage magazine in 1925, and Marie the following year .

Magritte decided to “only paint the objects with their obvious details”. Only from 1926 onwards was it possible for him to concentrate exclusively on artistic production through fixed contracts with the Brussels gallery “Le Centaure”, with The Lost Jockey his first surrealist image being created that year. In 1927 he had his first solo exhibition in the gallery "Le Centaure" with mostly abstract pictures. Key images of his mysterious “black period” are those with tall black men. The Man from the Sea or The Thief from 1927 are among those works whose inspiration is based on the film hero Fantomas. In the same year he moved to Le-Perreux-sur-Marne near Paris , where he lived until 1930. In Paris he received rich suggestions from the French surrealists, and he was particularly impressed by the metaphysical pictures of Giorgio de Chirico . Chirico's song of love is often mentioned as a work that made a special impression on Magritte . 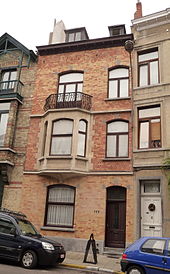 Magritte's house on rue Esseghem in Brussels, where he lived on the ground floor from 1930 to 1954

From 1930 Magritte lived again in Brussels as the center of a circle of friends interested in culture. In 1932 ELT Mesens became his art dealer after the “Le Centaure” gallery had closed. He made friends with André Breton , Paul Éluard , Joan Miró , Hans Arp and later with Salvador Dalí . He was represented with some works in the Exposition Internationale du Surréalisme , which took place in 1938 in the Galerie Beaux-Arts in Paris. He was also friends with the screenwriter Claude Spaak, whose wife Suzanne Spaak was portrayed by him. In 1946 he signed a contract with the gallery owner Alexander Iolas , which promoted his work in the USA and motivated him to also deal with sculpture. In 1947 Magritte had his first exhibition in New York.

From 1929 to 1966 he worked as an editor of several magazines and newspapers, he made several short films , orientated himself again to the Impressionists, joined and left the Communist Party of Belgium several times and gave lectures on his work. Since the 1960s, Magritte's painting and thinking had an important influence on trends such as Pop Art and Conceptual Art . In 1956 he won the Guggenheim Prize for Belgium. In 1959 René Magritte took part in the documenta II in Kassel .

In 1967 it was suggested to him to have several of his paintings executed as sculptures . He drew the designs, made the molds and signed the models. Died unexpectedly René Magritte shortly thereafter on 15 August 1967 in his home in Brussels to cancer . He found his final resting place in a cemetery in Schaarbeek . His last picture remained unfinished on the easel until his wife's death in 1986 . Throughout his life he led a very middle-class existence and rarely left his hometown.

His former home at 135 rue Esseghem in Jette has housed the René Magritte Museum since 1999 . In addition to some works of art, it contains the almost complete original furnishings. Since 2009, the Magritte Museum in Brussels city center has been devoted to the work and life of the artist as part of the Royal Museums of Fine Arts . This museum houses the world's largest collection of René Magritte's works of art.

Magritte is considered to be the most important representative of Belgian surrealism , along with Paul Delvaux , whose works have a similar style . André Breton said:

“What is Surrealism? It's a cuckoo's egg that is placed in the nest with René Magritte's knowledge. "

The main task of Surrealism was to shake conventional experience, thinking and seeing habits and to mix reality with dreams. Magritte succeeded in doing this by painting naturalistic representations of objects, but making them strange through their unusual arrangement. One of his most famous pictures is La trahison des images (Ceci n'est pas une pipe) (“The betrayal of images (This is not a pipe)”), of which there are versions from different years. Magritte said:

“A picture is not to be confused with something that can be touched. Can you plug my pipe? Of course not! She is just a representation. If I had written on my picture that this is a pipe, I would have lied. The image of a jam slice is definitely nothing to eat. "

Magritte used recurring objects such as the apple, the pipe, the bowler, the curtain, the dove, the blue sky with white clouds, the iron bells, the egg, the lion, the tethered balloon or people with a cloth in front of their faces. Most of these works related to childhood memories such as the tethered balloon that crashed on the parental home or the mother found dead with a nightgown over her head. He used amazing contrasts in his pictures. For example in the series of the picture L'Empire des lumières (“ The Realm of Lights ”), in which the houses are in the dark, but it is bright day in the firmament.

René Magritte's artistic work was aimed at clarifying reality (for example: This is not an apple 1964, The betrayal of images 1928/1929) and emphasizing that the picture is just a picture and that you don't even eat the most beautiful painted apple can and can neither stuff nor smoke the clearly painted pipe. On the other hand, Magritte was anxious to give the everyday and familiar something unexpected. In The Forbidden Reproduction (Portrait Edward James) 1937, Elective Affinities 1933 or The Dangerous Relationship 1927, things are presented that contradict the viewer and his multiple experiences.

“With regard to my painting, the word 'dream' is often used in an ambiguous way. My works do not belong to the dream world, on the contrary. When it comes to dreams in this context, they are very different from those we have in sleep. They are more like self-willed dreams in which nothing is as vague as the feelings you have when you take refuge in sleep. Dreams that don't lull you to sleep, but want to wake you up. "

In the film portrait of Monsieur René Magritte , produced in 1978 , the French filmmaker Adrian Maben traces the artist's life based on childhood memories, pictures and old film recordings of the artist. DVD at Arthaus, 2009. ISBN 978-3-939873-18-1

500 franc note from the National Bank of Belgium