The Museum of Modern Art ( MoMA ) houses one of the world's most important and influential collections of modern and contemporary art . The museum is located in the district of Midtown of the New York district of Manhattan at 53rd Street between Fifth and Sixth Avenue . The collection includes works of architecture and design , drawings , paintings , sculptures , photographs , prints , illustrations , films and electronic media . The Museum of Modern Art also has a library of 300,000 volumes . 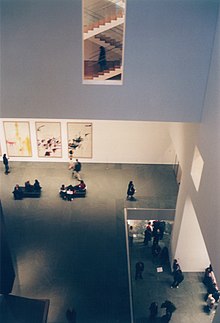 The founding of the Museum of Modern Art goes back to Lillie P. Bliss , Mary Quinn Sullivan and Abby Aldrich Rockefeller , who recognized in the late 1920s that the USA lacked an institution for modern and contemporary art alongside the art history- oriented museums. It was opened on November 7, 1929 under the direction of founding director Alfred Barr . The museum was well received by the public and changed buildings three times over the next ten years in order to have more exhibition space. In 1939 the Museum of Modern Art moved into the building in Midtown Manhattan that is still the location of the museum today. Architects were Edward Durell Stone and Philip Goodwin, who created the first modern museum building with the minimalist building.

Under the direction of Barr, he established a conception and organization of the museum, which provided for a division of the museum into different departments for the various genres of art . This division was retained and further strengthened during the further expansion of the collection. The number of works of art rose rapidly from eight prints and one drawing at the start of the museum to over 150,000. Films and a significant number of still images from films were also purchased. In the 1950s and 1960s, the building was expanded according to plans by the architect Philip Johnson . In 1984 the museum was renovated under the direction of César Pelli and the exhibition space was doubled. Between 2002 and 2004, the museum was rebuilt and expanded for $ 860 million under the direction of Japanese architect Yoshio Taniguchi . On November 20, 2004, the Museum of Modern Art reopened. The current director is Glenn D. Lowry.

The Museum of Modern Art's collection includes over 150,000 works of architecture and design , drawings , paintings , and sculptures by , among others, Alice Aycock , Louise Bourgeois , Alexander Calder , Henry Moore , Claes Oldenburg , Eduardo Paolozzi , photographs , prints and illustrations . There are also around 22,000 films , four million still images from films, as well as video art such as by Valie Export , Lutz Mommartz , Pipilotti Rist and Julian Rosefeldt and other electronic media .

The Museum of Modern Art exhibits, among other things, design objects for everyday use such as chairs (e.g. Rietveld's zigzag chair ) or the one that Ferdinand Porsche falsely identified as his own development, but actually designed by Béla Barényi in every detail VW Beetle . There are also drawings by artists such as Paul Cézanne , Edgar Degas , Natalija Gontscharowa , Wassily Kandinsky and Egon Schiele . These include works by Pablo Picasso , Piet Mondrian , Jean Arp and Andy Warhol . 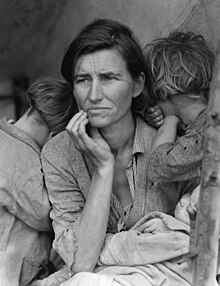 One of the most famous photos from the exhibition The Family of Man : Migrant Mother (1936) by Dorothea Lange

From the beginning, special exhibitions on certain art styles, genres and the work of individual artists have been a focus of the museum's work. Many of these exhibitions have written art history - in a double sense of the word - by discovering art movements in museums and creating new terms. The most important of these exhibitions are: Machine Art (1934), Cubism and Abstract Art (1936; with Alfred Barr's famous development scheme on the cover), Fantastic Art, Dada Surrealism (1936), Sixteen Americans (1959), The Art of Assemblage (1961; which introduced the concept of assemblage to art literature) and The Responsive Eye (1965; considered the founding exhibition of Op Art in a museum ). Another famous and very popular exhibition was The Family of Man from 1955, in which photographs were shown, which should, in their entirety, comprehensively depict humanity. This show then went on a world tour.

Other exhibitions were Four German Printmakers: Max Klinger, Lovis Corinth, Christian Rohlfs, and Otto Dix from 1991, Frank Lloyd Wright: Architect and Three Masters of the Bauhaus: Lyonel Feininger, Vasily Kandinsky, and Paul Klee from 1994. In 1999 the exhibitions Alfred Hitchcock: Behind the Silhouette , Different Roads: Automobiles for the Next Century and Fame After Photography took place.

The museum itself is also the subject of exhibitions. During the museum renovation from 2002 to 2004, 212 outstanding masterpieces were exhibited first in Houston and then from February 20 to September 19, 2004 in the Neue Nationalgalerie in Berlin under the title “ The MoMA in Berlin ”. Some exhibits were also temporarily located in a branch of MoMA, the affiliated PS1 in the New York borough of Queens . The Museum of Modern Art also lends pictures for other exhibitions.

The British Iris Barry , film critic and co-founder of the London Film Society , founded in 1925, was appointed the first female curator with her husband John Abbott as director, and in 1947 she became director herself. As Wasson describes, the idea of ​​film and Hollywood - film as an art form and the preservation or exhibition of films may not seem revolutionary, but "strange" and became the subject of public debate. Even in the 30s, the new muse film had its proponents, which was accompanied by utopian ideas and enlightenment hopes, and one found oneself between aspiration and entertainment and the continents. With the end of silent films and Hollywood in its commercial heyday, this technical mass medium was about to be subjected to a re-evaluation emanating from Europe (not excluding propaganda purposes), although the institution found a kind of (highly) cultural boom, on the other hand it was Not always made easy for the Film Library internally.

“People who know what to do with modern painting, literature or theater are surprisingly ignorant of modern film. [...] It can be said without exaggeration that the only great art form peculiar to the twentieth century is practically unknown to the American public who could best appreciate it. "

Sometimes the directors did not even own the rights to their films, nor were they always interested in them. For reasons of space, the film material was recycled in previous years , the film rolls thrown into the ocean or given away. Remarkably, pieces from the earliest silent film era have survived, which were often sold. Also in those days 16 mm prevailed, on the one hand amateur format, but on the other hand also as a security film . The idea of preserving the film material only came up later.

It was only through the funding of the Rockefeller Foundation that the Film Library was financially sound. According to Buxton, those responsible at Rockefeller were guided by considerations such as: "How can you help the audience [...] to an understanding that enables them to distinguish between good and bad [...] in film?" Rockefeller paid from 1935 onwards MoMA, precisely because the film industry was inaccessible to appreciation (today one would speak of fandom ) and to science. The big studios also took part with some persuasion. In 1936 Barry negotiated an agreement with Paramount , MGM, and others to make copies of negatives for educational purposes at their own expense.

At MoMA and (a few) comparable European institutions, the realistic function of film as a document of contemporary history was also considered. Above all, the exhibits there embodied the focus of systematic intellectual debate and Barry strove to put them in the right context. Initially, her collection positioned itself among new releases and recognized filmmakers: Méliés , Porter and David Wark Griffith . With the selection and compilation of the not necessarily “best” products of the latest art form, the Film Library offered a review of lost forty years, a sometimes popular, sometimes marginal outlook and a forecast of the accelerated, modern world and the diverse USA in particular. to assume an identity yourself. The destination of the trip was by no means clear. Barry raised academic operations to a new level with the loan deal and the establishment of the long-needed canon .

At the 10th Academy Awards in 1937 , the Film Library received a Special Award in recognition of “ […] its significant work in collecting films dating from 1895 to the present and for the first time making available to the public the means of studying the historical and aesthetic development of the motion picture as one of the major arts. "(German:" [...] for offering the public for the first time ways of researching the historical and aesthetic development of the feature film as one of the art forms. ")

From 1941 to 1943 Siegfried Kracauer worked as a special research assistant at the Film Library . The director Luis Buñuel was also there from 1941 to 1943. Much later, especially in the 80s, the collection grew: among others, Turner Entertainment Company and RKO handed over larger posts, Albert Broccoli donated the famous Bond films, and Clint Eastwood , Martin Scorsese , Francis Ford Coppola and Oliver Stone left their works.

The Department of Film and Video now stocks more than 22,000 films from around the world and four million stills, making it the largest international collection in the United States, with works from all decades and genres. The collections are held at the Celeste Bartos Film Preservation Center , which opened in Hamlin, Pennsylvania in 1996.

On May 3, 2007, Rajendra Roy was named Celeste Bartos Chief Curator of Film .