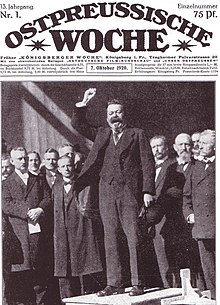 The German East Fair (officially German East Fair Königsberg , also known as Königsberg Fair ; DOK) was established in Königsberg in 1920 to economically promote the province of East Prussia , which was cut off from the German Empire by the “ Polish Corridor ” after the First World War . The first East Fair was opened in September 1920 by Reich President Friedrich Ebert , who had traveled with the Reich Minister of Economics Ernst Scholz by ship with the East Prussian Sea Service .

The first east fair was held in the existing buildings of the Königsberg zoo . For the subsequent trade fairs, the architect Hanns Hopp built new exhibition buildings in the ramparts from 1920, including the sensational Haus der Technik from 1924/25.

After the First World War, the province of East Prussia was still part of the German Empire after the Treaty of Versailles , but was cut off from it by the so-called “Polish Corridor” and only accessible by direct sea route. If you wanted to use the land route for passenger or goods transport, you had to cross Polish national territory and customs and passport controls were required several times. In order to stimulate economic life in the exclave of East Prussia, the city of Königsberg started a trade fair in 1920. This German East Fair was held in September in the beginning of 1920 , and then annually in February and August . Since 1928 there has only been one fair a year, which was held in the second half of August.

In the beginning it was an agricultural capital and consumer goods fair. In addition to wholesaling, the trade in colonial goods , iron and iron goods, flax , hemp , hides, hides and leather , building materials and coal , textile goods and the wood and fuel trade were of great importance. Because of the success, the range is also expanded with industrial goods. Following this additional approach, the House of Technology was built in 1925 . The DOK strengthened the economic ties between the province of East Prussia, which was cut off from the Reich, and at the same time paved the way for the German economy to access the Eastern European markets. In 1930 there were 120,000 visitors, 2,500 of them foreigners. In 1937 the number of visitors rose to 204,000. The DOK developed into the second largest trade fair in the German Empire after Leipzig. The last fair took place in the war year 1941.

When the decision was made to hold the German East Fair on a regular basis, the city of Königsberg made land available on the former moat. At the end of 1920, the architect Hanns Hopp, employed by the Messamt, designed a site plan with an entrance area, many exhibition halls and a restaurant. Because the first halls were supposed to be ready for the spring trade fair in 1921, Hopp built them as a timber framework . By the autumn fair in 1921, the entrance area and the restaurant were also ready, these were now built using reinforced concrete . Hopp placed the entrance area on the Hansaring. In the early 1920s, Hopp often gave his buildings a design that figuratively relates to their function. Therefore, the entrance is reminiscent of the tent of a bazaar, with long thin poles and a tent-like pyramid roof. Hopp designed the exhibition restaurant as a twelve-sided building with high arched windows.

In 1922, the sculptor Hermann Brachert created four larger-than-life figures made of artificial stone for the exhibition restaurant. You are missing.

After the end of the inflation, Hopp built the House of Technology , which had been planned for some time, in 1924/25 .

The timber-framed exhibition buildings of the Deutsche Ostmesse no longer exist, including the entrance area. The reinforced concrete exhibition restaurant, which was used as a sports hall for a long time, has survived the Second World War to this day. The House of Technology is today a market hall and the Handelshof, as it has been since 1927, the town hall.

On the remaining area there is now a market hall, a park and - on the part adjacent to the former Hansaplatz - the Christ the Savior Cathedral .