Pacman is a redirect to this article. For the package manager see Arch Linux .

Pac-Man ghosts by artist Invader at the Guggenheim Museum Bilbao 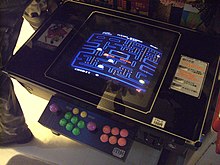 Numerous clones , variants and further developments of the game appeared for almost all operating systems. The original can now be played with an emulator (e.g. MAME ), whereby the actual game files ( ROMs ) are not included in universal emulators.

The name is derived from the Japanese onomatopoeia paku paku for "repeatedly opening and closing the mouth" and the puck- shaped figure of the main character; puck also means “goblin” in English. It was designed by game designer Tōru Iwatani . On October 26, 1980, Midway released the game licensed as Pac-Man in the United States. The name was changed because it was feared that the inscription "Puck Man" on the machine could be changed to "Fuck Man". In terms of play, it remained unchanged, except that the four ghosts in the game were given different names.

The game character Pac-Man has to eat points in a maze while ghosts pursue it. If you eat a “power pill”, you can, conversely, follow the ghosts, which are now blue, for a certain time. Sometimes fruit also appears on the playing field, which earns the player extra points if you eat it. If you don't eat the symbol, it disappears after a while. If all points are eaten, you get to the next level . This differs from the previous one mainly through the higher game speed (in the lower levels also through a different behavior of the opponent). The arcade version is controlled by a joystick .

On the left and right of the screen there is a tunnel through which you can go and thus deceive your opponents. The ghosts do not move randomly. Each has a specific strategy that follows the player's movements or inputs.

Since the game should appeal to a female audience, Iwatani designed "cute" opponent figures. Pac-Man's opponents are four brightly colored ghosts with large eyes, whose shape is reminiscent of the frayed end of a mop . The ghosts each show their own behavior and have names and nicknames. The names of the ghosts can be seen during Attract Mode and have been changed for the US version. They are as follows:

Billy Mitchell allegedly set a historic record on July 3, 1999. He completed 255 levels with maximum points without ever being eaten. He collected all bonuses and ate every blue ghost. On April 12, 2018, all of Billy Mitchell's records were removed from Twingalaxy's high score database and he was exposed as a "cheater". The maximum score is 3,333,360 points and is known as the perfect game .

On September 12, 2009, a new record was officially announced. The new record holder, David Race, was 42 seconds faster than Chris Ayra and thus managed a time of 3 hours, 41 minutes and 22 seconds.

At the 1st official Atari Pac Man World Championship in Paris in 1982, the then 26-year-old German student Johann Beiderbeck collected 14,516 points within 15 minutes and thus secured the title.

In 1982, the then 8-year-old Jeffrey R. Yee appeared on the TV show “Starcade” in the USA and claimed to have achieved 6,131,940 points after several hours of playing. For this he received on December 5, 1982 a letter of congratulations from President Ronald Reagan , who congratulated him on the world record. However, such a score would only be possible if level 256 could be completed.

Although the game is designed to never end, the "split-screen level 256" cannot be solved due to a technical circumstance. The left part of the screen shows the usual part of the maze, while the right part is filled with letters and symbols, seemingly incoherent.

The level counter is an 8-bit unsigned integer value . When changing from level 255 (0xFF) to 256, the memory location overflows and takes the value 0x00. The labyrinth is destroyed by a loop that draws fruits at the bottom of the screen to indicate the current level in the first seven levels. This is called when the level counter is less than 0x08, i.e. also at level 0x00 - on the other hand, a different code block is run through for the higher levels. The condition for a further loop pass is queried with the assembler command djnz( decrement and jump if not zero ). Since the memory location overflows from 0x00 to 0xFF when it is first decremented and is not equal to 0, the loop is run through a total of 256 times.

A 1 kB area in the graphics memory indicates which symbol is to be drawn where on the screen. The arrangement is chosen so that from address 0x4000 the lower two-line screen edge is indicated from right to left, then from address 0x4040 the playing field from top right to bottom and from address 0x43c0 the upper screen edge is indicated. This is followed by an area of ​​the same size and arrangement with color information. In level 256 the loop now copies the seven fruits from address 0x3b08 into the graphics memory, but continues to run, although there are no more fruit objects to follow. The result is that half of the playing field is overwritten with data from the ROM before the 256 runs are completed.

The level is not solvable, as there are not enough points in the left half of the field to complete the level.

Mitchell, who claims to have reached this level several hundred times, offered a price of over 100,000 US dollars in 1999 for those who demonstrably successfully mastered this level before January 1, 2000. The price was not claimed.

Official arcade successors to Namco and Midway offshoots are:

Numerous other games are based on a similar game principle:

Designer Tōru Iwatani states that the game character Pac-Man is inspired on the one hand by the sight of a pizza with a missing piece, on the other hand it represents a simplified form of the Japanese word for mouth (口). 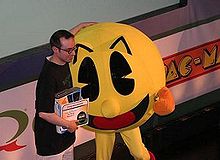 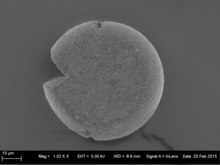 In 1982, Milton Bradley released a board game version in which up to four players have to eat small marbles with a plastic Pac-Man at the same time.

In 1981 the American music duo Buckner & Garcia released the album Pac-Man Fever , which consists entirely of pieces that revolve around video games. The theme song Pac-Man Fever reached number 8 in the US charts . The singer Gerald Mann released a German version of the song in 1982 under the name Pac Man Fieber .

In June 2007, the first Pac-Man World Championships took place in New York City (USA). The classic game was not played here, but a new "Pac-Man Championship Edition" (only available on Microsoft Xbox 360 and as a Java application for cell phones). These world championships were funded by Microsoft , Namco Bandai Games and Quiznos .

On the occasion of its thirtieth birthday, on May 21, 2010, Google replaced its logo on the main page for 48 hours with a JavaScript-based version of the game, with the level limits mimicking the Google logo (see also Doodle ). The Google version offered the full 255 levels, with the 256th level being displayed with a similar display error to the original game. However, the word “GAME OVER” then appears here, which ends the game. If the player also clicked twice on the start button " Insert Coin " (or English Insert Coin ), which is normally replaced by the "Good luck" button, he could also play in co-op mode with Ms. Pac-Man . The Google version has been archived and is permanently available even after the 48-hour campaign has expired. The unusual sounds when calling up the Google site with the Mozilla Firefox browser unsettled many users and the large number of inquiries led to a short-term collapse of the Mozilla Foundation's support pages . In the blogosphere, there were also discussions about the economic damage caused by the game that employees spend longer on the Google pages.

On April 1, 2015, you could play Pac-Man on Google Maps on the streets of any place.

On November 29, 2012, the Museum of Modern Art announced the purchase of 14 computer games, including Pac-Man , for a new permanent design exhibition in the Philip Johnson Galleries from March 2013. The announcement identified the titles as outstanding representatives in the field of interaction design. In addition to the visual quality and the aesthetic experience, criteria were therefore all aspects that contribute to the design of the interaction, such as the elegance of the program code or the design of the player behavior.

There is a so-called Pac-Man strategy in business. The principle: if Pac-Man swallows a certain pill, he turns from being hunted to being hunter. Transferred this means: companies can defend themselves against a takeover if they try to buy up potential buyers with their own capital.

On the weekend 5./6. November 2016, strangers painted a twelve-meter-wide Pac-Man figure on a piece of fresh, as yet unmarked lane of the Austrian A2 motorway on the Pack near the Herzogberg tunnel .

In 2017, an artificial intelligence completed the more complex variant Ms. Pac-Man with the previously unachieved maximum number of points.

Because of its similar appearance, an astronomical object was named the Pac-Man Nebula .