from Wikipedia, the free encyclopedia
This is the spotted version , flagged on April 2, 2020 . There is 1 pending change that has yet to be viewed.

Computer memory that is used by the graphics hardware ( graphics card or onboard graphics chip) is referred to as graphics memory (also video memory or video RAM ) . This can be a reserved area of ​​the main memory ( shared memory ) or dedicated graphics memory .

Up until the end of the 1970s there was no separate computing unit responsible for calculations for screen output. All the necessary operations were performed directly by the CPU (for example Atari 2600 ) and cached in the main memory of the computer. 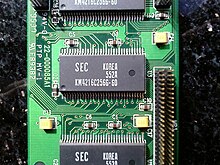 The first generation of graphics cards (until 1990) used the local graphics memory only as a frame buffer , that is, the pixel data or, in text mode, the character data are calculated by the CPU and stored in the local graphics memory; the electronics on the card, which cannot be referred to as GPU in the actual sense of the word, then simply reads this data repeatedly and transmits it to the monitor. The following overview shows the memory configuration that was common at the time.

Which combinations of image resolution and color depth in graphics mode require which memory size for display - assuming a corresponding monitor - can be read here. In the text mode , which was still common at the time , the memory requirement is significantly lower.

The GPUs in this category were able to execute a few commands (for example, draw a square) independently. The local graphics memory, mostly between 1 MB and 8 MB, was implemented using DRAM , EDO RAM , VRAM or MDRAM . The latter two are semiconductor memory technologies specifically designed for graphics cards.

The first real 3D accelerators hit the market in the mid-1990s. Triangle transformations and texture mapping were calculated independently from these maps. The first representative of the series was the Voodoo Graphics with 4 MB or 6 MB EDO RAM in 1996 .

At the end of 1999 Nvidia's GeForce256 appeared with 32 MB SGRAM - the first graphics card in the retail business with an integrated T&L unit .

In current systems, the GPU sits on a separate plug-in card that is connected to the CPU and the main memory via a bus system (usually PCI Express or AGP , rarely PCI ) . On the plug-in card there is semiconductor memory specially tailored to graphics operations, which is directly available for the GPU. New developments in real-time - rendering and price erosion in the semiconductor memory segment contribute to the steady growth in the graphics memory. Graphics cards with up to 24 GB GDDR 5X-SDRAM are available.

Another possibility is the integration of the GPU on the motherboard and is used in applications where 3D performance is not a priority (for example with most workstation computers). This inexpensive and low-performance variant does not have its own graphics memory; rather, part of the main memory ( shared memory ) is made available for storing data.

What information is stored in the graphics memory?

Older graphics cards send graphics calculations to the CPU. Due to higher resolutions and more reproducible colors, the data flow between GPU and CPU grew over time until it was slowed down by the performance of the system bus. Another problem was the graphics memory used. This does not allow simultaneous read and write access. The RAMDAC has to wait with reading out as long as the CPU is writing to the memory and vice versa. On modern computers, the system bus is the critical performance-determining component; this is particularly evident in current 3D graphics. The following example calculation should clarify this.

These approx. 2100 Mbit per second only take into account the data stream required for monitor output. The entire data transfer that may occur for image synthesis does not contribute to the value. As a consequence, the use of the system bus should be reduced to a minimum.

Many graphics cards use dedicated graphics memory (also called video RAM ). This is located in an exclusive memory module and is physically separated from the main memory .

The advantage of a block that is separate from the main memory over the shared memory method is that it does not have to take into account the specification of the computer bus. For example, refreshing the memory content of the PC is not controlled by the chipset but by the GPU .

Despite broadly similar technology of DRAM - memory chips , so faster memory access times can be specified. The technology of these chips was called VRAM , due to the further development VRAM today only refers to chips with separate input and output lines of this technology.