This article treats the pixel as a picture element.

With pixel , pixel , image cell or pixel (rare Pel ), the individual color values of a digital raster graphics referred to and necessary to capture or display of a color value area elements at a image sensor or display with grid control. “Pixel” (nominative singular: the pixel; genitive: des pixel; plural: the pixel) is an artificial word from the abbreviations of the English words picture (colloquially abbreviated to “pix”) and element and is often abbreviated as px .

Pixel of the raster graphic

A raster graphic that has been enlarged in different ways. A pixel does not necessarily have to appear as a square when enlarged.

The pixels of a raster graphic are points arranged in a grid pattern, to which a color is assigned.

Often times, pixels are viewed as rectangular or square. However, this is not a generally valid model concept. In terms of digital signal processing , a pixel is a discrete sample ; No statements can be made about points other than the pixels. This becomes clear when you enlarge raster graphics : The appearance varies depending on the selected scaling method, and the pixels of the original image do not necessarily appear as squares when enlarged (see image on the right). A comparable mistake would be to interpret the sampled values ​​of a digital audio signal as values ​​that remain the same over a certain time interval, because the audio editor shows the signal in the magnification step-like.

The model concept of a square pixel is inappropriate because it neglects the various options for converting image content to raster graphics. In computer graphics, in which artificial images are generated, the desired image content can be available as a vector graphic , 3D scene description or another type of image description. This picture description defines a continuous signal which is converted into a raster image ( rasterized or rendered to be) must, by the image contents of scanned are. The reconstruction filter used determines how the colors of the original image description are weighted in the vicinity of a pixel and are incorporated into the pixel color. In an image capturing system that digitizes a natural image signal on an optical image plane or line , the corresponding theoretical "reconstruction filter" (the point spread function ) is determined by the optical and electronic elements of the system.

It is possible to consider pixels as squares, but this is only useful if a box filter has been selected as the reconstruction filter, because here the color value of a pixel would correspond to the mean value of all color contributions within the square. For the subsequent image processing, however, the resulting pixel must generally be viewed as a discrete sample value. When “one pixel width” is mentioned, then it actually means the distance between two neighboring pixels; the “center point” of a pixel actually refers to the pixel itself. Formulations such as “covering half a pixel” mean the covering of the image content by the reconstruction filter used.

The color coding used in the pixel is defined, among other things, by the color space and the color depth . The simplest case is a binary image in which a pixel stores a black and white value.

In addition to color information, raster graphics can also contain a so-called alpha channel that contains transparency information. The storage of any further information is conceivable; the exact format depends on the graphic format used . A certain format, which is specified by the image memory of the graphics card, must only be observed for output on the screen .

Both the image resolution (and thus the local sampling rate ) and the size of the information stored in the pixel (such as the color depth) are limited in practice, which is why a pixel can only represent an approximation of reality.

The limitation of the local sampling rate means that image information is lost. According to the Nyquist-Shannon sampling theorem , certain image contents and a low sampling rate or resolution can lead to aliasing effects or the step effect (“pixelated” display). These effects can be counteracted by antialiasing; the antialiasing in computer graphics uses to different methods. The antialiasing of optical signals can be done by a low pass , combined with an aperture correction .

Reducing, enlarging, or rotating a raster graphic can result in images that are blurred or appear flawed.

Pixels in image sensors and screens

Pixel geometry of a common LCD television screen in a white area. A square pixel consists of rectangular sub-pixels. 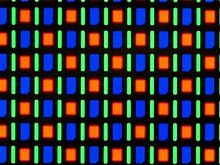 The pixels of an image sensor or screen usually consist of areas each with a basic color (red, green and blue). In liquid crystal displays (LCD = liquid crystal display), each visible picture element is controlled with a color value. The areas responsible for the basic colors of the pixel, called subpixels , are often arranged adjacent to one another. The subpixel structure, which is finer than the pixel, can be used to increase the horizontal resolution during rasterization ( subpixel rendering ). Triangular, irregularly sized, alternating or additional white subpixels are also possible, for example with the PenTile pixel geometries from Samsung . With some, especially older flat screens, so-called pixel errors can occur due to the manufacturing process.

Tube screens project the image signal using electron beams onto a phosphor matrix with a fixed resolution. The slit , stripe or perforated mask mounted in front of the phosphor layer guarantees that only the basic colors belonging to the respective electron beams are excited. Because of the relatively broad and approximately normally distributed intensity profile of the electron beams, as well as distortion and scattered light, the pixels of the phosphor matrix do not exactly match the expected pixels, even if the output resolution corresponds to the physical resolution of the tube screen.

The physical size of a pixel depends on the device. The pixel density of a screen or scanner is specified in pixels per inch (ppi) or dots per inch (dpi). Commercially available computer screens achieve a pixel density of around 100 ppi, corresponding to 0.3 millimeters per pixel. With televisions, the pixel density is usually lower and with newer smartphones many times higher, while the sensors of scanners and digital cameras can reach several thousand ppi. The maximum number of pixels that can be used in image sensors is often given in megapixels , although mostly only the color points of a Bayer sensor are meant and not the image points. The aspect ratio of a pixel on the screen (English pixel aspect ratio ) does not necessarily have to be 1: 1; most SDTV video standards dictate irregular pixel aspect ratios . The pixel size and the pixel pitch in relation to the image resolution have a decisive influence on the legibility and recognizability of texts and graphics on computer monitors and televisions.

The term "pixel" in the sense of a small display unit of a device was first used in 1884 in Paul Nipkows patent specification for his electric telescope , but the term was already common in optics before that.

The term " picture element " was used in various US patents from 1911. When it became possible to scan, process and display images using computers in the 1950s and 1960s, the specialist literature mostly used other terms such as “ resolution element ”, “ spot ”, “ sample ”, “ raster point ” or “ matrix element” ".

The oldest known documents in which the term "pixel" occurs are Fred C. Billingsley's 1965 articles Digital Video Processing at JPL and Processing Ranger and Mariner Photography in Proceedings Vol. 0003 and 0010 of SPIE . The less common name Pel was published by William F. Schreiber as part of his article Picture Coding in IEEE Proceedings Vol. 55 in March 1967.

The term “pixel” is also used in terms of certain raster graphics applications, such as pixel fonts , pixel art, and pixel banners . The term voxel , which, among other things, denotes the three-dimensional equivalent of a pixel, as well as the term texel used in image synthesis for pixels of a texture , is derived from “pixel” .