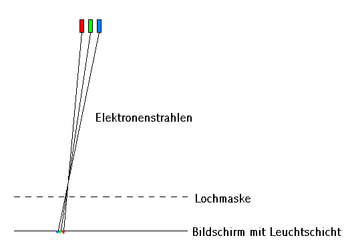 Function of the perforated or slit mask

A perforated mask (see also strip mask , slit mask ) is a thin metal grid that is attached in color picture tubes about 20 mm behind the screen . The perforated mask has as many holes as there are triples of fluorescent material on the screen. Each hole has three colored fluorescent fluorescent points. The three electron beams hit the same place on the mask, but only those electrons that originate from the associated electron beam reach the associated luminous point of the luminous triple (blue, green, red) through the mask holes: The three electron beams are the same for all three colors , however, come from slightly different directions, as the electron guns in the tube neck are arranged in a triangle (delta tube or " Chromatron ") or next to each other in the case of slit masks ( in-line or " Trinitron "). The shadow mask shades the phosphors with the wrong colors from the respective direction , i. that is, it prevents z. B. the electron beam for red hits the places on the phosphor layer that glow green. The light is generated by fluorescence through the impact of the electrons on the corresponding phosphor layers on the back of the screen. All three electron beams must always hit the same point on the mask or the screen. The effort to achieve this convergence even with the beam deflection over the entire screen surface is very high with a triangular or delta arrangement of the electron beams.

In order to reduce the effort required for correction, the mask consists of narrow vertical slots instead of round holes, especially in the case of televisions. One then speaks of a slit mask ; The electron guns are arranged next to each other, the convergence effort is reduced, a higher proportion of the electrons reach the fluorescent screen.

However, computer screens continue to use shadow masks to avoid aliasing effects on straight edges (e.g. in CAD applications).

The resolution of a picture tube is essentially dependent on the hole spacing ( dot pitch ). For monitors this is 0.21 to 0.28 mm, whereby the distance between two holes (hole center to hole center) is normally specified. The smaller the hole spacing, the higher the possible resolution of the tube and the more detailed the image display - provided that the focus and the convergence are correspondingly good. 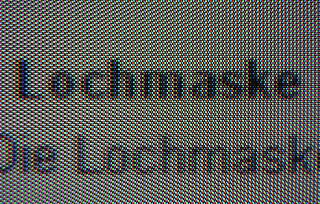 Macro shot of a screen with a shadow mask

The image on the left shows the macro photograph of the word shadow mask from this article. The individual color components red, green and blue can also be recognized very well. Because the human eye is not able to resolve the individual colored dots produced by additive color mixing of the impression that it, as well. B. is white.

The convergence errors (the three electron beams do not hit the same place) are particularly visible at the edge of a monitor or a television picture tube . They lead to color fringes on contours. Convergence is more difficult to achieve with monitors with a shadow mask (delta arrangement of the electron beams) in contrast to the Trinitron (beams next to each other).

One problem with shadow masks is the so-called doming (bulging), which arises from the relatively high heat input into the shadow mask and its thermal deformation compared to slit masks.

Hole and slit masks for televisions and computer monitors are made from 140  µm to about 250 µm thick Invar steel or other steel with low thermal expansion. The shadow mask plate is coated with photoresist (e.g. casein ). After exposure in a so-called “printer” , the holes are etched out at approx. 70 ° C using chlorine gas . After cleaning and drying, the masks are subjected to extensive technical checks. The production of pinhole and slit masks is now largely concentrated in East Asia. The last Western European manufacturer was based in Müllheim in southern Baden .

The tubes are coated with the phosphors using photolithographic processes in several steps. The exposure is carried out with exactly the steel mask that is later built into this tube. As a result, good congruence between the point grid on the glass bulb and the steel mask is achieved.