This article describes technical and artistic areas of application of etching processes. For the destruction of tissue by chemical substances in medicine, see chemical burns .

Etching (from Middle High German etzen ) refers to the removal of material in the form of depressions on the surface of organic or inorganic materials through the use of caustic substances .

Etching processes are used in industrial production technology as well as in arts and crafts. Parts that are not to be deepened are first protected from the etching agent with a masking varnish.

So-called "shape-etched parts" are etched industrially. These are mostly small-scale metal parts made of thin material, e.g. B. gears for watches. In addition to component outlines, surfaces can also be structured in a defined manner or transverse profiles ( topographies ) can be produced individually using special etching processes. For example, in addition to pure deep etching, the finest channels can also be etched into the metal at the same time. Large-area etchings (so-called half-etches ) can also be integrated. The depth of these etchings can be controlled with an accuracy in the single-digit micrometer range. The precision of such parts is exceptionally high. The light-sensitive masking varnish is exposed either via photographic film or directly by laser beam, washed out and the exposed metal surface is either deepened or completely etched away ( ISLE process ). In electronics , the conductor tracks of circuit boards , which consist of a sheet of hard paper coated with a thin copper layer or of epoxy resin reinforced with glass fibers, are produced by etching.

In the context of semiconductor technology , the etching of materials is used in the production of microelectronic circuits or components of microsystem technology . In this case, find both dry etching such as plasma etching , deep reactive-ion etching , plasma-assisted etching or ion milling , and wet chemical methods such as the crystal orientation-dependent anisotropic etching of silicon with KOH solution application.

Gravure cylinders are either engraved under computer control or provided with photochemical cover layers and etched.

Also in the production of metal signs, e.g. B. nameplates , the etching process is used. The metal is exposed to an etching liquid. Parts that are not to be deepened are first protected from the etchant with a masking varnish. Metal surfaces not covered with acid-resistant lacquer are deepened or roughened by the action of the acid.

In aircraft construction, chemical abrasion is used for lightweight construction in order to partially reduce the thickness of the aluminum sheets.

Applications in arts and crafts 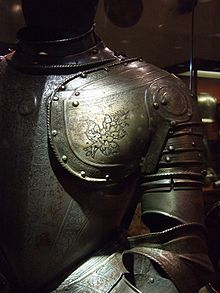 The use of etchings as a weapon ornament is one of the earliest uses. Art and sword smiths use various etching methods for damascening for decoration . If the material to be etched is not completely homogeneous , individual parts are attacked more strongly than others and regular patterns ( moirées ) arise , which reveal the original structure of apparently homogeneous materials. The process has nothing to do with Damascus steel, it is just an optical imitation.

In order to decorate knife and saber blades as well as all kinds of haberdashery goods with shiny figures on a matt background (damascus), the areas that are supposed to keep their polish are coated with a liquid etching base and the whole thing is exposed to steaming hydrochloric acid , which is caused by mixing table salt and develop sulfuric acid . In particular, a distinction is made between the following procedures:

The gold and silversmiths use etching processes, which are more time-saving compared to manual engraving, to create fine chasings and patterns on metal objects.

In lithography , nitric or hydrochloric acid diluted with more or less water or with a gum arabic solution is used to etch the lithographic stone . The most common applications of etching processes in the artistic field are etching , etching and soft ground etching .

The application of an etching base (Syrian asphalt varnish) for a line etching ( etching ).

The etching of a line etching with ferric chloride.

Etching base and masking varnish

If individual parts of the surface are protected by a compound that cannot be attacked by the etchant (etching base or masking lacquer ), any desired drawings can be produced. To do this, you cover the entire surface with etching ground, remove it again in places with the help of suitable needles, styluses or other tools, and thus create a drawing.

If different gradations or tones are to be achieved in the etching and therefore individual lines are to be deepened more or less, after the etching liquid (the etching water ) has worked for some time, the image components that are not to be further etched are covered with a brush and liquid etching ground (when etching this is usually a solution of caustic primer in turpentine oil). After drying, the next etching process takes place. This process is called step etching .

(Solid) etching base is obtained e.g. B. off

The ingredients are melted together, the asphalt finally finely powdered. The mixture is left to cool or kneaded in water. To apply the etching ground, you knock it into fine canvas and then into loose taffeta and guide the ball around the heated surface with light pressure. 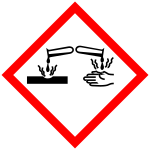 Etching agents are also known as stains or etching liquids . Chemical substances are used as etchants, which change the material to be etched in a chemical reaction (mostly oxidize) and thus bring it into solution. Etchants are usually acids or strong oxidants.

Safety instructions: In all processes, not only corrosive, but also sometimes harmful or toxic chemicals are used or formed. In some cases poisonous and lung-damaging gases are produced. It is essential to adhere to the safety regulations! Do not dispose of waste in household waste or waste water! Etching processes with mercury and other toxic heavy metals are strongly discouraged. 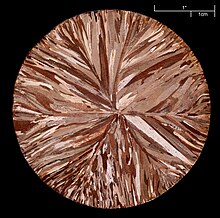 As caustic water is used for copper - Etchings

To etch steel (siderography) one uses

Hydrofluoric acid is used as an etchant on glass .

To produce shiny features on a matt etched surface, cover the drawing with amber varnish or a solution of asphalt in turpentine oil , then stir fluorspar powder with dilute sulfuric acid (1 part acid and 4 parts water) to a thin paste and leave it at 30–40 ° C on the glass panel, so that the areas not protected by the etching base appear matt.

Ornaments with flowers, leaves, etc., are most easily made by gluing them to the glass with rubber, then covering the entire surface with a molten mixture of wax, tallow, and oil, and once these have solidified, removing the parts of the plant and exposing them Places etches. Steam shaped hydrofluoric acid are matte etching.

In the glassworks of Baccarat, St. Louis and Fort zu Metz, a solution of 1000 g of water, 250 g of crystallized potassium hydrogen difluoride , 250 g of hydrochloric acid and 140 g of potassium sulfate is used for matt etching glass . The corrosive effect of this agent is very even.

The hyalography invented by Böttger and Bromeis supplies etched glass plates for printing.

A motif is applied to the glazed and burned-smooth porcelain object by screen printing, stamping or tracing. The areas that should not be deepened after the etching process and also remain shiny are covered with asphalt varnish. A hydrofluoric acid mordant is applied to the uncovered areas. This roughened and deepened these areas. After removing the etching paste and the asphalt paint, the decor is coated with polished gold , burned and polished. When polishing, the etched, deeper areas remain matt and the raised areas become shiny.

Etching agents that are not applied in liquid form, but in a pasty manner, are called mordant . This allows areas to be etched without the protection of masking varnish, because the mordant only works on the areas that have been applied. The mordant is either applied directly to the material with a brush or rubbed very thinly and evenly on a glass plate and then transferred to the very carefully cleaned, grease and oxide-free metal surface using a rubber stamp. Use is z. B. an etching mass of iron (III) nitrate with some platinum chloride for iron and steel and of antimony (III) chloride with platinum chloride for all other metals with the exception of gold and platinum. Either a dull etching or a firmly adhering black coloration is obtained immediately. It is then left to lie for a short time, washed with water, which appropriately contains little soda or ammonia water, dried and rubbed the etching with a little fatty oil or covered it very thinly with spirit or oil varnish. The different metals cause insignificant deviations in the process, but on all of them one gets very sharp, firmly adhering drawings.