After the turpentine oil and water have been completely expelled from the balsam by distillation, rosin remains . The oil contained in the distillate is drained from the water after the layers have separated and is distilled again with water and a little lime to remove entrained dyes , resins and acids ( formic acid ) . Turpentine oil is harmful to health and the environment.

Turpentine oil is used, for example, as a thinner and solvent for paints (paint). As a cheaper alternative is now often white spirit used commercially as white spirit called.

Turpentine oil appears as a colorless, light and volatile, strongly smelling and burning-tasting liquid that burns with a sooty flame and is soluble in ether , chloroform , carbon disulfide , petroleum ether and 5-10 parts of 90 percent alcohol, but not in water.

The turpentine oils consist of mixtures of isomeric terpenes α-pinene (70% share and higher) and β-pinene (up to 30%). Some qualities still contain 10 to 20% 3-carene . Camphene , limonene and other terpenes are also found in small amounts .

The terpenes only partially evaporate in shallow vessels in the air and leave behind a residue that has been altered by the uptake of oxygen (thick oil from the porcelain painter), which finally dries to a hard, transparent varnish ( resinified ). The use of turpentine oil as a binder for paints is based on this property .

Turpentine oil dissolves most resins, including rubber , sulfur and phosphorus , mixes with essential and fatty oils and varnish and is therefore widely used in technology, especially for the production of varnishes , for thinning oil paints and for falsifying essential oils. It is also used to remove grease stains and to bleach materials that can not tolerate chlorine , such as ivory . It is also used in high-quality shoe polish .

In 1825 the cleaning effect of turpentine oil was discovered by chance. Turpentine oil has the property of dissolving all fatty substances and resins, while it does not affect the color and structure of the fiber. The odor of the remaining solvent in the clothes was a disadvantage. It was used for dry cleaning until the middle of the 19th century .

Particularly higher-boiling petroleum distillates , resin and camphor oils have been observed as adulterants , which even appear in the trade as independent goods under the name artificial or patent turpentine oil ( Larixolin , Paintoil ) and can be used for some purposes. However, because they are too volatile, they reduce the durability of the paints and have the disadvantage of a bad smell and fire hazard. The determination of the specific gravity , the flash point and especially the refraction is sufficient to prove it . The terpenes contained in turpentine oil are considered to cause or aggravate allergies. White spirit (= turpentine substitute ) or universal thinner can be used as an alternative solvent . 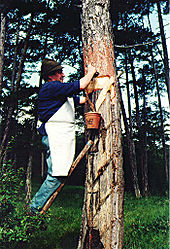 The balm called turpentine , from which turpentine oil is distilled, is obtained primarily from pine trees .

In Merck's Warenlexikon , which appeared until 1922, different qualities of turpentine oil were distinguished based on the origin:

In addition to the French maritime pine Pinus pinaster and American turpentine oil, frankincense pine Pinius tadea , Pinus elliottii , Pinus echinata and the yellow pine Pinus ponderosa , the German (Russian-Polish) turpentine oil is more correct than pine oil ( Latin oleum pini, seu terebinthinae germanicum , French Essence de pin , English pine oil ) is an important commodity. It is obtained from the root wood of the Scots pine , Pinus sylvestris , in tar smelting , has a yellowish color and a rather strong, unpleasant odor and does not dry as quickly as American or French turpentine oil. It contains sylvestrene - a terpene hydrocarbon compound made of C 10 H 16 , which is also found in Swedish, Finnish and Russian turpentine oil. The pine oil is therefore not suitable for mixing with lacquers, for oil paints only if it is used for external coatings, as its odor is too unpleasant. It comes on the market from Poland and Austria .

Oils related to turpentine oil are:

These four oils are mainly used in perfume production and as liniments.