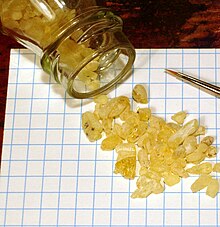 The term Sandarak (from the Greek sandarákē ) was in the past for various species from the family of the cypress family ( Cupressaceae used). In Europe in particular, the resin from juniper and cypress was often also referred to as sandarak or confused with the resin from the sandarak tree native to North Africa. The botanical separation of the parent plant of the real Sandarak from the genus Juniperus was only recognized at the end of the 18th century. Until the beginning of the 20th century, names like Callistris quadrivalis or Thuja articulata were in circulation as botanical names for the parent plant of the African sandarak. A species of the ornamental cypress Callitris preissii that came onto the market from Australia and is called "Pine gum" in English forms larger pieces than the African species, but is otherwise the same in terms of its usability.

The resin, similar to the mastic , is spontaneously exuded from the bark or obtained by scratching it. It is sold from Essaouira on the Moroccan west coast mostly via France , but also via Trieste and Venice . A distinction is made between two types: ordinary and fine , or natural ( in sortis ) and selected ( electa ). The latter variety forms pale yellow, elongated, white-dusted grains and stems that appear transparent and shiny on the break. The other consists of cloudy and impure bits, mixed with small gravel , sand , earth and wood particles.

The resin is brittle and easily breakable, has a balsamic- resinous odor and a slightly bitter taste and does not soften when chewed (like mastic), but rather breaks down into a sandy powder. It is completely soluble in alcohol , ether , fusel oil and acetone , but only partially soluble in turpentine oil , carbon disulfide , chloroform and petroleum ether . In addition to small amounts of essential oil and bitter substances, sandarak mainly consists of resin acids from the group of pimarans and labdans such as communin acid and communol . The latter tend to polymerize, which explains the greater hardness of the resin compared to mastic.

The resin is traditionally used as an incense by the natives of North Africa and is considered an offering to the gods.

Sandarak is used for the production of smoking powder, but mainly of alcohol varnishes and polishes as well as greasy and volatile paints . For surface treatment, however, it is always used in conjunction with Elemi , Venetian turpentine (larch resin) or some castor oil , as it provides coatings that are very hard but too brittle, subject to crumbling and not particularly shiny. Finely powdered sandarak forms the well-known eraser powder with which erased areas on paper can be made writable again.